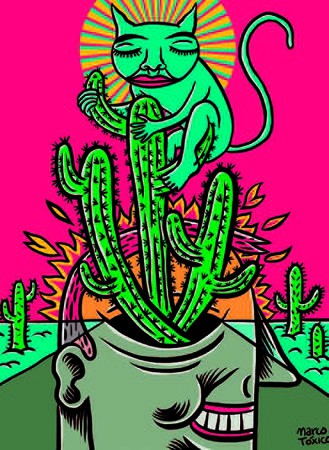 Once the domain of Peruvian shamans, hallucinogenic ceremonies are becoming increasingly popular in Bolivia.

Any mention of hallucinogens in the West usually conjures up images of spaced-out 1960s rock stars and bearded baby boomers in washed-out T-shirts imploring us to ‘keep it real’. But in Bolivia, hallucinogens are a much more ‘real’ and important part of culture than we could imagine back home. And since sacred plants containing psychotropic substances have been used for spiritual healing here for millennia, I decided to seek out the experience and the powers and dangers of the hallucinogens native to this Andean country.

If you’re looking to cleanse your soul, fight your demons, and connect with the spirit world, Miguel Kavlin of the Sacha Runa organisation in Bolivia is your first stop. Sacha Runa is a network of people in Bolivia and Peru dedicated to the proper use and promotion of the two most famous hallucinogens endemic to South America, ayahuasca and the San Pedro cactus. The members of Sacha Runa conduct spiritual ceremonies that draw upon indigenous tradition, which are open to foreigners as well as ordinary Bolivians. The organization runs an eco-tourism company called Bolivia Mistica that holds retreats in La Paz and Rurrenabaque, a small town in the Amazonian Beni department.

The San Pedro cactus grows in the Andean regions of Bolivia, Peru, and Ecuador, normally at altitudes between 2,000 and 3,000 meters, while ayahuasca is found deep within the jungle. Miguel says that the two ecosystems where each plant is found influence their effect on the mind. ‘They both act in the same way, opening up our mental barriers’, he told me, ‘but whilst the effect of San Pedro is often masculine and inspires movement, the effect of ayahuasca similarly resembles its plant—a vine, constricting and drowsy’.

His interpretation of the psychotropic effects of San Pedro as a masculine and kinetic experience is easy to see. A quick drive south of La Paz will take you to the Valle de la Luna (‘Moon Valley’), an otherworldly mass of jagged rocks and daunting cliffs. And rising tall above the rocks is the great cactus of the altiplano—San Pedro. Also called huachuma in the Quechua language, the San Pedro cactus was named after Saint Peter, who guards the gates of heaven. By eating the cactus, one is able to ‘enter heaven’. Miguel told me of how, in San Pedro ceremonies, participants will often dance and conduct spiritual pilgrimages due to its kinetic and energising effect.

Ayahuasca—the ‘vine of the soul’ in Quechua—is arguably a deeper and more intense experience than its Andean counterpart. According to Miguel, ayahuasca ceremonies usually involve groups sitting immobile in a circle. Although it’s much more well-known in Peru and Brazil, at least six tribes in Bolivia have been known to use the vine as part of their rituals, including the Moxos people of Beni. Recent archaeological evidence has demonstrated that the Tiahuanaco civilisation of western Bolivia (circa 500–950 AD) used the hallucinogen. Traces of the alkaloid harmine, the main chemical component of ayahuasca, were found in the hair of mummified remains in the Atacama Desert. This is surprising as the Tiahuanaco civilisation did not have an immediate source of ayahuasca, as they lived in the Andean region, rather than the Amazon. This shows that they were actively transporting plants from the jungle for hallucinogenic use. This serves to underline the importance of hallucinogens in the pre-Colombian culture of Bolivia.

However, as much as I found evidence of hallucinogen use in Bolivia, I was still skeptical on whether ayahuasca or the San Pedro cactus could really have healing powers. Miguel enlightened me on this aspect. ‘Ayahuasca is the medicine for the twenty-first century. No longer are we able to devote our lives to monasticism as we did in the past to overcome psychological pain’. But, he added, ‘ayahuasca and San Pedro can cure people with years of trauma in such a short time’. The ability of the drugs to bypass our minds and our psychological barriers might make them some of the most useful therapeutic tools in the modern-day battle against depression and addiction. The purifying ability of these hallucinogens could be their most powerful effect. Miguel’s testimony, along with hundreds of Internet posts, attest to hallucinogen use as being invaluable in curing people of traumas and deep psychological problems—problems modern psychiatry and conventional therapies have difficulty in treating. Obviously, cures cannot be promised to everyone. According to Miguel, the beauty of these plants lies in the different effects they have on different people.

But dabbling with the brain is never without its dangers. In recent years, the use of ayahuasca and, to a lesser extent, the San Pedro cactus has taken off as a tourist attraction in neighbouring Peru. Ayahuasca related deaths have been reported over the last few years. Ayahuasca is not dangerous per se, but its combination with other medication and/or an unstable mental condition can have dramatic consequences. One tourist reportedly hung himself following a bad trip. Miguel tells me these drugs have become party aids in Cusco, to the point where he has even had to heal those who have suffered from bad experiences as a consequence of using it irresponsibly. He could not have been more clear on the importance of observing the proper ritual with regard to hallucinogens, with mutual trust and a proper environment being essential to guard against the possibility of a bad trip and psychological damage.

While I declined to partake in the ceremony on this occasion (too many daemons!), Miguel spoke of the growing popularity of hallucinogen use in Bolivia. ‘I get kids from El Alto as well as housewives from rich areas’, he said to me. Whilst hallucinogen use has long been a rather taboo subject, too commonly associated with the production and trade of narcotics such as cocaine, Bolivia is beginning to follow the trend and more and more people voluntarily choose to try ‘the Sacha Runa way’ than ever before. If the potential of the trip is ‘as vast as universe itself’, as Miguel says, then why wouldn’t people be curious?

As for myself, having a browse through the hippie-ish websites devoted to San Pedro cactus and ayahuasca, I’m a little skeptical that these drugs can really transport me across the ‘space-time continuum’ and make my subconscious ‘open like a flower’ (ma-aaan!). Yet the hallucinogens certainly have their believers here in Bolivia, and they might offer an interesting alternative to Western psychiatric medicine, in which habitual dosing of profit-making pills is the norm, and which infamously treats symptoms rather than addressing causes, often involving an uneasy tradeoff between chemical dependency and psychological suffering. These times may call for people to put down their pills and pick up a cactus.