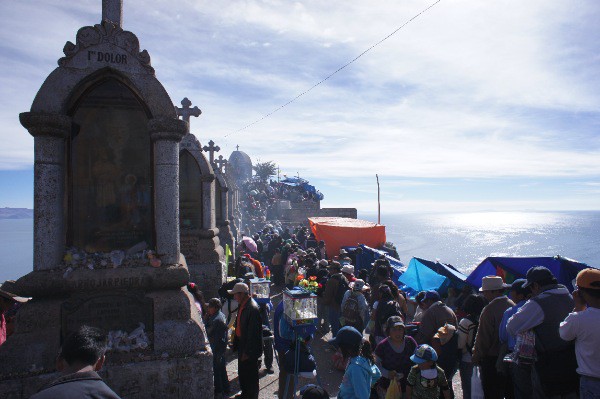 I couldn’t help myself. Bolivia’s festive fever swept me up and carried me off to where I wasn’t supposed to be, to Copacabana’s celebrations. As I was assigned to report on everything that wasn’t August, this festival was left without coverage. So I went undercover to share one last rite of August with you.

Copacabana´s independence day festivities display the Bolivian standard: syncretism. Celebrated in the first week of August it is not just about liberty, it is also a religious festival dedicated to the Virgen de la Candelaria. I arrived on the last day, and like thousands of faithful already had that week, I climbed the steep path up the Cerro Calvio, the 3966m peak that overlooks the town. Numerous stalls occupied both sides of the path, many selling miniature items like model cars or houses for people to offer to the statue of the Virgen at the top. Candles burnt around the many stone crosses that guided your way to the top, and Yatiri shouted prayers, sprayed beer, and let off fire crackers along the sides of the path, adding to a chaos in which I saw a small boy accidentally set alight a large wooden figure of Jesus.

I had come here without aspirations to mysticism, greedy for a chance to partake in this month’s festival analysis, searching for moments to make droll commentary. But, as I reached the summit and the spectacular view of Lake Titicaca spread out beneath me, my senses reeled. Dizzy from the climb, and with the Yatiri’s rough cries resounding through the crowds and encircling my head, the candles took on a misty, reverberating sheen. Even I, a disbelieving observer, found myself prey to a most unsettling and powerful sense of spirituality.