NOT FOR THE FAINT OF STOMACH 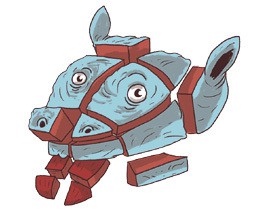 An exploration of Bolivia’s most unexpected delicacies

The restaurant El Solar de las Cabecitas is an open room painted with warm red and orange. Decorative mirrors cover the back wall and, from the wide windows, the sounds of the street rise to us on the top floor. I’ve come with Bolivian Express editor Andres to try cabecitas, the restaurant’s title dish. Direct translation: 'little heads'. Lambs’ heads, to be exact—they’ll be boiled in a prepared soup, along with vegetables and seasoning, for three to four hours before serving. It’s unlike anything I’ve ever heard of.

When my food arrives, it’s hidden quite modestly under a covering of shredded lettuce and tomato. 'If you take off the salad, you’ll see the eye', Andres says with a tinge of anticipation.

I eat a forkful of rice. Then, gingerly, I scrape away the lettuce with my fork. Underneath is an assortment of meats and bone and cartilage, but no eye. Maybe it’s on the other side? Andres flips the head over and it suddenly becomes extremely apparent that what’s sitting on my plate is an animal’s skull. The (empty) eye socket gapes at us, the jaw stretches into a horrific grin, and wet sinews strain across the bone. The most odious, however, is the tongue, a thin white slab that lolls to one side. I quickly flip the head back over.

Examining the various types of meat, I decide to go for the tongue, which seems the most tender. It slices off easily, revealing the blackened teeth of the lamb. I put a small chunk in my mouth, chew briefly, and wash it down with some Coca-Cola.

Andres looks at me expectantly from over his completely average lunch. 'It tastes like morning mouth', I tell him. He takes a bite from my plate and agrees with me. Moving on, I cut a piece of the cheek, delicately removing it from the cartilage. This meat has a more irregular texture than the smooth muscle of tongue, but a much better taste.

The last part to try is the brain, a mass of white-yellow tissue and purple veins folded into each other. The skull cradles it like a perfectly-sized bowl. This section, despite seeming the most cringe-worthy, is actually my favorite by far—I imagine uncooked ground beef would have the same consistency.

Feeling slightly ashamed of my squeamishness, I ask to get the remains of the head wrapped up before chatting with restaurant owner Walter Rocha. Apparently when El Solar de las Cabecitas first opened, they served rostro asado , a different type of cooked lamb’s head that’s fried rather than boiled, allowing the head to retain the skin. This proved too grisly for most customers, however, and cabecitas replaced the dish. Both variations of cooked head originate from Rocha’s home of Oruro, and he’s pleased to bring to La Paz a unique dish that’s enjoyed by Bolivians and adventurous tourists alike.

My quest for the next unusual food takes me to the market of Cementerio, where cholitas display their wares in front of them—fish, potatoes, wheels of white cheese. I pass stalls of chicken legs and bowler hats to find the market’s equivalent of a food court. Eating a variety of hot soup and warm drinks, small groups of people crouched on low chairs spread out down the street.

I approach several vendors before finding the stew I’m searching for—chanfaina. There’s a few different ways to make it, all of which involve various parts of mutton or goat. This version, according to my confused communication with the cholita vendor, contains lamb’s heart and lung, along with slightly less exciting ingredients like potatoes. I hand the vendor a note, she passes back a somewhat sticky coin from the depths of her apron, and I leave with my dinner double-wrapped in plastic bags like a lumpy hot water bottle. 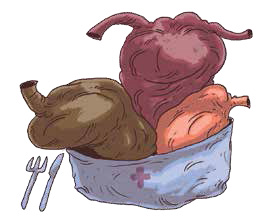 I next meet with Huini Dominguez, owner of the Amazonian fruit business Ama-Fruit. But he’s come to talk with me instead about lagarto, an ingredient in many Amazonian dishes that translates directly to 'lizard' but which means anything from caiman to crocodile. Unfortunately, I’m not able to try any of these dishes—the most notable being chicharrón de lagarto—as recent floods have caused transportation of the meat to become increasingly difficult. This is not to say that the lagartos are unavailable, however. In many rural areas, they’ve been brought by the floodwaters to small towns, where they now live alongside people.

‘Lizard’ meat is apparently both delicious and nutritious, but there are regulations placed on how much can be harvested from the rivers. Even the fishermen who set traps to keep lizards from eating out of their fishnets must first receive permission from the Bolivian government in order to deal with the lagarto thieves. That said, Dominguez is pushing to expand the meat into greater Bolivia as a more mainstream ingredient. Though popular in the amazonian region, it’s usually only found in La Paz in fancy restaurants. He explains a gradual process involving several stages, starting with families and small communities, to keep development sustainable. His larger vision? Conquering the international market.

Walking up the steps into Layka restaurant, I am confronted with an alarmingly vivid mural depicting some sort of horrific Last Supper-style feast. Cholitas tear into cabecitas, grinning devils dance around the table, men eat boars and boars eat men. Of the many painted walls, this one is certainly the most captivatingly gruesome. I ask the owner, Mauricio Mier, about it and he simply laughs, telling me about his plans to commission a second mural on the ceiling, depicting a meeting of Heaven and Hell. He’s not one to shy from spectacle.
The dish that pulled me here is cui asado, whole roasted guinea pig. The one I’ll be eating comes, according to Mier, from a partner in the countryside who sends the restaurant only the biggest pigs ready to be cooked. Eating guinea pig is traditionally Peruvian, 'but it has a La Paz twist', Mier tells me.

When my plate arrives, I have a strong urge to play with my food. And by that I mean pick it up by its tiny claws and make it dance. Luckily, I’m able to restrain myself. The guinea pig is splayed on its stomach, arms akimbo, eyes squinted shut. I think briefly of my childhood wish for a pig as a pet, then slice my knife into its side. The meat has an odd silky texture, but what gives it flavor is the delicious yellow pepper sauce spread over the back. I offer a bite to Rodrigo, the Bolivian Express editor accompanying me, and he nods in approval.

Then the night takes a strange turn. Mier brings us two shot glasses of bronze liquid from a large clear jug containing coca leaves and some unidentifiable white knobbly lumps. He refuses to tell us what’s involved in the process of creating the homemade alcohol, which burns pleasantly—he calls it llokalla and says that he gives it out on the hour, only to women. After a brief period of musing over the ingredients, Mier gives us two shots of singani, which we quickly down.

He gives us a look. 'Do you want to know what you just drank?' Reaching behind the counter, he pulls out something shrouded by a checkered napkin. From the way he holds it, it’s obviously quite heavy. Rodrigo and I eye it suspiciously.

Mier places a hand on the napkin, telling me to count down.

'Three, two, one-and-a-half-' But he’s already unveiled the object. One dull grey eye stares at me from the jar. A thick snake’s body wraps around itself, singani covering it completely. It’s difficult to tell exactly how long the snake is. I glance at Rodrigo, who’s smiling in a horrified sort of way. It’s a tense moment.

Apparently Mier captured the constrictor himself—he mimes the method of cramming it into the jar and the motion of the drunk snake trying to escape. It seems intensely over the top and possibly hazardous. But then, it was the best singani I’ve ever tasted. 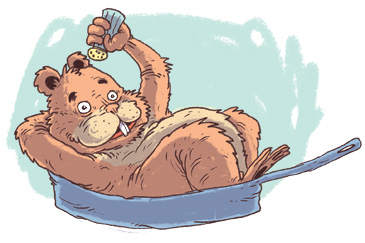