Not Another Corny Story 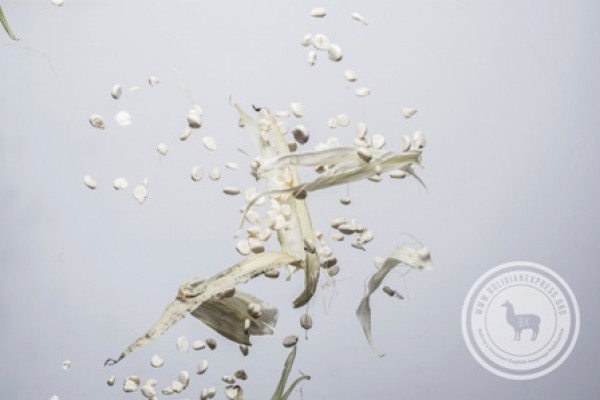 The mythical origins of the Golden Crop

Corn is not something that I had particularly considered before coming to South America. It is just another component of the international diet modern society enjoys these days. Then I had my first plato paceño. Suddenly, I was confronted with corn in proportions I had never seen before: big, white door-stops of chewy starch. ‘Where the hell did this come from?’ I thought, delving into my third kernel. Soon I was seeing corn everywhere: in soups, toasted, boiled, in drinks, popped, in desserts.

Scientific research has only been able to make estimates about the original domestication of corn, and hard facts about where it originally came from are elusive. In lieu of data, I turn to two myths: Heart of Gold from the Inca tradition and the Guaraní Myth of the Twins.

‘It is the most important crop in all of South America because it is a fundamental product,’ says Milton Eyzaguirre of the Museo Nacional de Etnografía y Folklore in La Paz. ‘It is as important as the potato.’ True, corn is crucial to the functionality of rural life. According to the FAO, in 2014 family farming produced 70% of Bolivia’s total corn yield. The importance of the crop, however, extends far beyond its use in subsistence agriculture.

For ancient cultures, it was a life-giving gift from Pachamama that warranted respect and veneration. Naturally, humans sought to explain its existence. ‘In myths, what is created is history that was never written in official documents,’ Eyzaguirre says, ‘but that allowed people to understand social, economic, and political structures in the Andean world.’

What is consistent in these myths is the idea that corn came out of sacrifice for the sake of the community, which in turn sacrificed its time and effort to cultivate it. The idea of sharing is still central in corn culture. The corn-based drink, chicha, remains a sacred and integral part of the Andean way of life, still served at traditional celebrations. Long before the first mines, a very different type of gold was coming out of the ground in Bolivia. Later, in 16th-century China and across the world, the introduction of New World corn helped overcome famine. Like its metallic counterpart, this gold has the power to shape and rebuild nations.

Huayru and Sara, a young couple, were members of different communities. Sara’s ayllu, the Charcas, used lances in battle, whilst Huayru’s ayllu, the Chayantas, preferred slings and stones.

One day, the two communities were besieged by a common enemy. In accordance with the duty of Andean women at the time, Sara’s unwavering support extended to the battlefield, where her job was to provide stones for her beloved’s sling.

Long had fate’s eyes smiled on this daring duo, but that day she changed her mind. Sara was made for higher things than mortal life. Her heart was pierced in battle by a lance of her own people, the cruel consequence of a whim of the wind.

On beholding the object of his veneration, Huayru fell to his knees and wept in the final throes of Sara’s death. He cried through the night, past the end of the battle, and beyond the following day. He was so consumed by his grief that his cries echoed through the mountains as torrents of water exuded from his eyes. His tears cleansed the wound of his beloved and paved her way to the spirit world.

In his defensive mourning, nobody dared to approach Huayru for many days and many nights. Eventually, Mama Killa (the Moon) and Father Inti (the Sun) took pity on the young warrior. Huayru stared in bewilderment as, from Sara’s heart, there grew a plant like none he had ever seen before. From its long stalk sprouted forms that reminded him of soldiers. Wrapped in their green armour, there lay strings of golden teeth like the smile of a woman. The taste of the matured fruit was sweet like the kisses of his love, yet bitter as the death that had parted them.

Huayru realised that he had been given the children that Sara’s untimely demise had robbed him of. With great care, he took the new plant in his hands and gave it the name of his mother: Choclo. Knowing that this was a gift from the gods, he took Choclo to the temple of Punchao, the god of heat and the breath of life, offering it as a sacrifice before returning it to Pachamama.

In the Earth, choclo, or corn, grew and multiplied. Like the plant that grew from Sara’s heart, the Incas grew from the heart of the earth.

Myth of The Twins

One day, a mother was walking with her twins, Guaray and Yasi. Full of mischief, the twins eluded their mother’s watchful eye in order to play on the mountain. On their way home they passed over a plain, where they were sighted by the god Nandu Tumpa, who presented himself in the form of a bird. He thought they looked like the very companions he had been searching for to quell his loneliness. He swooped down upon the children and was just on the point of taking off when his progress was checked by a suddenly much greater weight. Looking down, he realised that the twins’ mother had grabbed ahold of her little ones’ toes and began pulling them down to earth with all her might. The god had only to stretch out his wings a little more for extra speed, dragging the mother hopelessly along the ground before she was forced to admit defeat.

When she looked down into her hand, she saw that she still held the tips of her children’s toes. She squinted her eyes to see the last of her little ones before sorrowfully turning for home. Time wore on for the grieving mother until one day she was visited by Nayderu Tumpa in a dream. The god ordered her to plant her children’s toes in the Chaco, a large, dry region extending over areas of Bolivia, Argentina, and Paraguay. The next day, the mother dutifully obeyed. After a period, the rain and sun created several tall, thin plants at the site where the toes had been planted. Eventually the crop spread through all the land, as the community came together to ensure its survival. Thus maize was created.