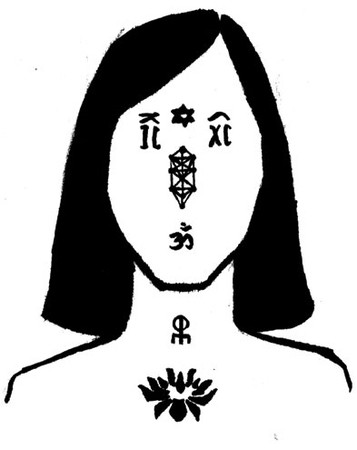 It is a well-known fact among Sharoll Fernandez’s friends, that throughout her life she has been part of every interest group imaginable. From adventist church to social volunteering, passing through hindu temples, shamanic rituals and zen meditation groups. In the latest installment of her personal saga, she has been challenged to explain to our readers what it means to search, to find, and sometimes to lose, in this spiritual quest towards finding one’s tribe.

I refuse to write. The experience could be worse than taking Ayahuasca, a Quechua expression which translates as the ‘rope of death’. This beverage, product of the boiling and filtering of various plants, is used in healing and cleansing spiritual rituals. It is believed that it lets the spirit leave the body without the latter dying.

How can I allow words to caress, or even attempt to fathom, experiences so sacred and intimate? Writing can indeed be seen as a ritual, of a different nature than those practiced by tribes in the Amazon. And I understand it is necessary, in some way, to surrender to this rite, as symbol of my being a part of a certain kind of contemporary tribe, that of those who seek to communicate. The tribe of those who have the dual burden and blessing of having a range of spiritual paths to choose from?

I’m a seven year old girl. Saturdays start on Friday nights, when instead of sleeping in my bedroom I move to my grandparents’ room to begin the Seventh Day alongside them. Early in the morning, before dawn has set in and the cold is felt more intensely, I am awoken by my grandfather. The ritual begins. We sing, someone reads a Bible passage, my father’s father comments upon it, we pray (which is not the same as saying our prayers), we have breakfast and we leave the house. It’s barely seven in the morning and there are already people in the temple. They wait for the sermon and they give worship through song. These songs don’t bother me, but I don’t feel they bring me closer to the Creator, as my grandmother says they do to her. Even so, I have my favourite, number 500 in the hymn book. Because of my age I cannot stay and listen to the pastor. I have to go to the children’s class where I am greeted by the young teacher in a long skirt. Her face is clean and her voice is sweet and soft, disturbingly sweet and exaggeratedly soft. Being an adventist meant to praise the Lord in word and through our actions. It meant not skipping Sabbath school, learning verses off by heart, doing charity, dressing and behaving appropriately, visiting the sick, knowing why it was necessary to keep Sabbath instead of doing so on Sunday. Among other things, it also meant being prepared to be seen as different, and even rejected. None of this, apart from the dogma, seemed negative. After all, showing consideration and using one’s memory were good things, I thought.

However, a childhood of light versions of biblical stories, and weekends of worship didn’t show sign of showing me the answers I was looking for. Something was missing.

This is when the journey begins. I’m going through adolescence, when what we look for is to belong. I discovered that going to the Temple on Saturdays wasn’t a given, it was a choice. And making use of my free will, confirmed by the teachings of Sabbath school, I decided to stay at home. Doing so gave me time which I spent, with increasing devotion, in front of the television. It later turned into time I used to find another nest. And this search continued to mutate. At first Saturdays were for leisure. Then I spent them wandering the streets. Later it was tango, and movies after that. Then I went on walks and started volunteering. One day I turn up at the Hindu centre, the Radha Krishna temple.

I’m fourteen and I have so many questions. I have looked for the address for over half an hour and, as is often the case, I find it just before giving up. The centre smells of Nag Champa and is inundated with images of gods that I cannot name but which I recognise as deities. The light is slightly lighter than normal. Someone comes up to me and asks me to take off my shoes. They whisper where, as a woman, I am to sit. They sing and dance at the same time. Simple movements, a simple toing and froing, but it is disconcerting and for seconds I feel ridiculous. Even so, I decide to pull myself together, and try to follow the choreography, leaving a foreign conviction to take over me.

After the chanting I am given a japa mala, a set of 108 wooden beads which I am explained, are to be used to recite Krishna’s name. They accept me without me having sought admission, and I commit without them having asked me to.

After some years I have not only wandered in and out of different congregations, I have even returned a couple of times to Sabbath school. I had become a vegetarian for three months when I was 10, and for three years and eleven months later in my adolescence. I had learnt to meditate in the mornings, reciting mantras in Sanskrit just before sunrise, and doing breathing exercises before bed. I had learnt the seven chakras of the human body, and knew of the various cleansing ceremonies for the body, mind, and soul. I had read about Zen Buddhism, the Sufi masters and Commander Ashtar, who I later discovered is the deity of a prominent UFO religion.

I had learnt how to read runes, the meaning of colours, and about the existence of salamanders, beings which inhabit fire. Like the fairies in the air and the gnomes of the earth, they taught me the secret of cinnamon rolls and how to best lay the table when you’re holding a tea party. I discovered that knitting with my grandmother was a price I gladly paid to hear her memories, and I learned that food tastes better when it is cooked for several people.

These spiritual groups, religions, and beliefs differed to an astonishing and catastrophic degree, but perhaps shared the notions that attachment to people or things can imperil your existence, and that we must fight against the fickle traps of our own ego, as well as the conviction that those who hold the deepest truths also have a duty to share them.

I had, effectively, gained acceptance into different tribes, each with its own rituals, language and demands for legitimate membership. I became an expert in watching behaviours, in understanding, or at least thinking I understood, what these people thought and believed. But most importantly, I was able to accept them with decreasing levels of disbelief in every new place I visited. Sometimes for seconds, or even months, this scepticism reached a vanishing point, allowing me to fully become part of worlds alien yet deeply familiar.

My journey through these different tribes, sometimes as a member, sometimes as an observer, has often felt like a primordial return. Meaning is found in people, and tribes are people at their core. Belonging to a tribe, however fleetingly, laces our existence with meaning and makes our lives worth living. A journey of this nature is an odyssey. As such, it presents us with a risk, in this case that of isolation, of never being able to return back to the mythic Ithaca and its people. In this journey, one can become lost, not in the world, but in oneself, given in to the intoxicating siren songs in the high seas. To elude them is to return home, to your friends, to your family, to yourself.

Eadem mutata resurgo, although changed, I arise the same. I return after the journey, not just home, but to my everyday life, the jokes, and the afternoon watching films. Throughout my life these various tribes have served as a refuge. They were mirrors where I could see my own image more easily, possibly because this mirror was more understanding towards my needs, as it suffered from the same ones. But they were a refuge because from them I was able to return to the world, to that place I didn’t feel was special enough to belong to. I was returned to this world to appreciate it, accept it and love it, because the world was there appreciating, accepting, and loving me.

At 27, I look back and understand why I was driven to go to the countryside to spend countless hours mantralising, and understand that this is the same reason I spent entire days in the kitchen with my grandmother deboning fish, or afternoons in my friend’s living room studying for an art history exam. I wanted to share and through doing so, belong.

Yet if I don’t find differences between these pastimes, and if my sensation of belonging and fulfilment are practically indistinguishable, what does it mean for me to be immersed in one community instead of another? How important is it, all things considered, to have meditated or to have cooked food for those I love? Everything can be sacralised, as my grandmother did with every meal she cooked, just as the most solemn of rituals can be trivialised when seen through the wrong set of eyes. I find the same mysticism in the overwhelming presence of the Sajama, as I do in an afternoon drinking tea and eating cake, or in Bhagavad Gita’s verses.