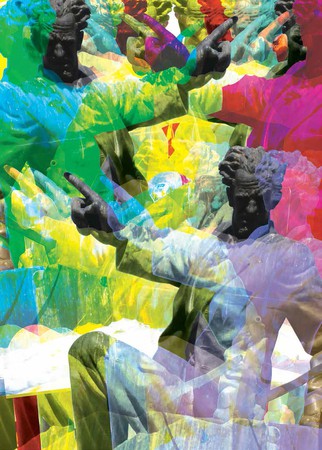 In the centre of the main square of the Sopocachi district of La Paz there sits a man. Perched on top of his plinth, he is a Bolivian hero, a symbol of national pride and patriotic self-sacrifice. But this is no Horatio Nelson brandishing his sword, nor Simón Bolívar astride his charger. This is Eduardo Abaroa, the landowner and engineer who died in defence of a strip of coastline that Bolivia lost in the War of the Pacific in 1879, the sea that people here are still taught to believe is theirs.

Every nation has its military heroes and Bolivia is no exception. And yet in some ways the glorification, the idolisation, the hero-worship of Abaroa is more excessive and inexplicable than that of other warriors. As François Schollaert, a historian specialising in this war, explains, ‘Abaroa had extensive lands in Antofagasta, and that is why he volunteered for the War of the Pacific, to defend his property’. In a country with a largely indigenous population and high rates of poverty and illiteracy, the image of this wealthy, well-educated landowner as a national hero somehow rings false. Stranger still, Abaroa did not die on the beaches. Instead, he died 200 km inland, something Alexis Pérez of the Universidad Católica Boliviana describes as a ‘tragic paradox’.

And yet Abaroa is, as the plaque on his eponymous square describes him, a ‘symbol of the return of the sea’: intimately associated with the struggle to defend the Bolivian coastline and its ultimate loss. The anniversary of his death, the 23rd March, is the Bolivian Day of the Sea. It is commemorated with a military parade, a show of defiance and celebration of the maritime history and culture of this landlocked nation.

In many ways, the story of what happened on that 23rd March is the stuff of a perfect myth. As a history book designed for Bolivian schoolchildren puts it, the Chilean army had swept away all resistance as far as the Carvajal pass across the river Loa. Abaroa (who, Pérez reminds me, was a civilian, with no military training) and his men ‘not only didn’t let the enemy across the bridge, but drove them back three times and forced them to use their artillery’. With all of his men killed and wounded himself, Abaroa was ordered to surrender, to which he replied with the immortal words:

These words have been repeated and reprinted and embedded into the Bolivian consciousness ever since; appearing in books, on a set of commemorative stamps (minus the expletive), on statues across the country and on postcards, posters and portraits of the hero himself. For many Bolivians, this simple phrase sums up the attitude of their nation towards its powerful neighbours: you may be stronger than us, you may subjugate us, but we will never respect you. A defeated man, but not a defeated spirit.

As is the case with all stories of this kind, however, there is another side to it. Abaroa’s opponents remember history rather differently. According to Chileans, the valiant Bolivian warrior, the heroic defender facing up to certain death, simply replied to the order to surrender with ‘What, me?’. There cannot, of course, be any definitive proof of what Abaroa’s final words actually were.The Bolivians have their martyr and for Chile he was simply another man who died in the war, a precursor to their ultimate triumph.

According to Pérez, Abaroa was not considered a national hero until ‘many years after the events of the War of the Pacific’. The historian argues that the creation of this quasi-mythical figure was simply a way of binding together the population. A nation needs heroes and it needs enemies, and the story of Abaroa and the loss of the coastline fulfils both. In a similar way, the underlying causes of Bolivia’s defeat - its weak economy and lack of industrialisation, its low population and poor communications systems - are turned from faults to unfortunate circumstances, making Bolivia the underdog up against a more powerful rival, Chile.

From whichever side you look at it, whether Bolivia’s accusation that its people were victims of an aggressive invasion or form Chile’s claim that they were simply responding to an unjust tax raise enforced by their neighbours, this was a war about greed. Though only few could actually benefit from any possible outcome, many died. And perhaps it is because of the senseless nature of the slaughter, of a warring set of neighbouring nations killing one another’s young men, that this conflict is remembered as much for the fallen as for the victors.

In now-Chilean Iquique, it is Arturo Prat, shot dead on the sinking warship Esmeralda , who is remembered and celebrated for his defiance; not his compatriot Condell who won a great victory on the same day. The remembered patron of the Peruvian army is Francisco Bolognesi, who declared his intention to defend Arica ‘hasta quemar el último cartucho’ (‘until the last bullet has been fired’) against a Chilean opponent who outnumbered his forces by a ratio of 3:1. Bolognesi, of course, was defeated. Turns out Eduardo Abaroa is not the only celebrated loser.