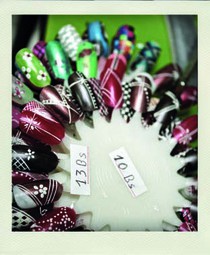 Watching her work makes me realise it's essentially a combination of sculpting and painting on miniature canvases.

This is just too good to be true, is my first thought upon discovering that for as little as 1 USD, I can get my nails done by women at little manicure stands in storefronts, and even on the street. When I first meet Tania Mamani she is with a client. She agrees to talk to me while she replaces an old set of nail extensions. I’m afraid I’ll cause Tania to lose focus, but she talks very animatedly while doing her job with uncanny precision.

Tania began her career after studying at a beauty institution and specializing in acrylic nail extensions. ’It’s an art’, she tells me with full conviction. I’d never really thought about nail technician in that way before, but watching her work after she tells me this makes me realise it's essentially a combination of sculpting and painting on miniature canvases.

She made the full time switch from being an auxiliary nurse to doing nail extensions about a year ago. Leaving nursing was beneficial for Tania in many ways. Not only does she love her new job but she earns more money and has more time to take care of her two sons, who are ten and twelve.

Tania’s abilities are in high demand even when she’s not on the clock. Tania has many examples of her work, which she eagerly displays for me on mini nail models. To be honest, I’m a little giddy myself at the thought of knowing a nail technician as good as Tania—I’d want them to do my nails all the time. ‘Yes, my friends love that I can do their nails. There are even boys younger than fifteen who want one nail done’.

During the interview I notice a certain familiarity between Tania and her client, Aime. When I ask about it Tania tells me that most of her clients are regulars. ‘They like my designs. It’s more personal. Many come back two times a week.’ Infact, Tania’s fan base is so big she hardly has any walk-ins. ‘My clients know about me before they come. They come and find me.’ Aime proudly tells me, ‘girls like cute long nails and someone to do it for them. I am very happy with Tania’s work’.

I’d been told by various Bolivian locals that the religious festival El Gran Poder brings in much work for nail technicians because of the elaborate costumes of over 50,000 dancers planned right down to the fingernails. I assumed Tania had done much work during the day but when I asked her she simply said, 'no, I didn’t work during it'. She knew everyone would be vying for business that day but she decided to relax and enjoy the time with her family.