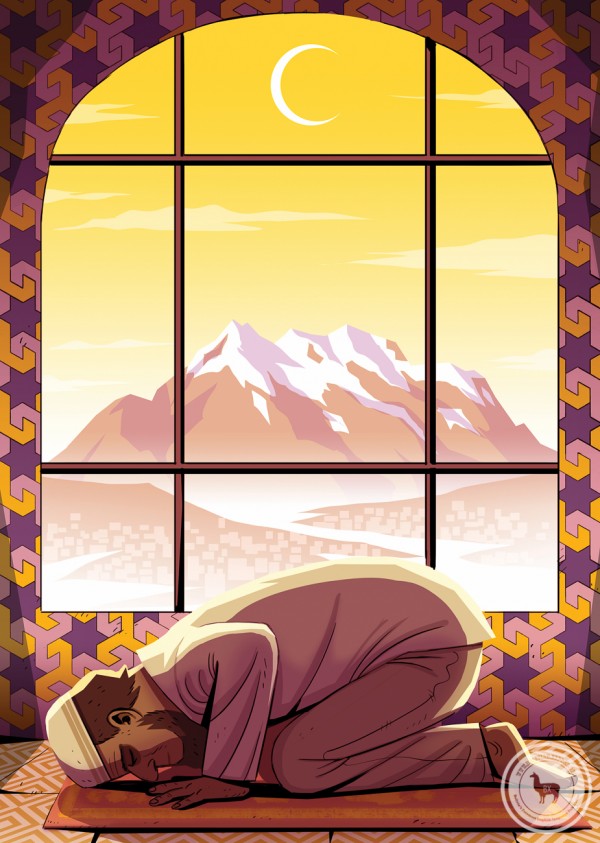 Behind the Walls of a Local Mosque

“Allahu Akhbar” (Allah is the Greatest) sounds through the prayer room of the As-Salam mosque on Friday afternoon, the holy day for Muslims. In La Paz, about forty people, mostly men, gather at the mosque in Sopocachi. Before entering the prayer room, imam Ayman Altaramsi, the religious leader of the mosque, gives me a hijab, or headscarf, to cover my hair. Without it I wouldn’t be allowed to attend the prayer, he explains.

I take off my shoes and sit down in the women's area, which is separated from the men’s by a curtain. On the other side of the room, men kneel down on the carpet as Altaramsi starts the service by thanking Allah (God) for the people’s coming. He begins by reciting Arabic verses and hymns that are elusive to me. Most of the attendees call out the words with full commitment. Looking through the transparent curtain, I see the silhouette of Altaramsi wearing a loose-fitting robe and a head cap

After the service, I meet Altaramsi in another room, and this time he’s wearing a modern suit. When I ask about his metamorphosis, he talks about his job as a doctor and briefly recounts his life story. He was born as a Muslim in Palestine and came to Bolivia to study medicine. Today, Altaramsi volunteers as a mentor for the Islamic Association of Bolivia, which includes tasks such as leading the prayer ceremonies and giving Arabic and Quran lessons.

The Muslim community isn't large in Bolivia. According to Altaramsi, there are about 2,000 people who practice Islam in La Paz and two official Sunni Mosques across the country. The one in La Paz has existed for 11 years. ‘Ninety-five percent of the people who visit it are Bolivian converts of all ages, generally converted between the age of twenty to forty,’ he claims.

The majority of the people attending the Friday ceremony are young men and women. This is because most of the adult men have work responsibilities. According to the National Statistical Institute of Bolivia, the majority of Bolivian citizens self-identify as Catholic. ‘Bosses don’t really keep in mind Muslim duties as they do in the Middle East,’ says Altaramsi. ‘Bolivian society is not structured around Islam.’

The As-Salam mosque functions as an informal center where they teach the values and principles of Islam. People come together to read the holy Quran and to learn about Islamic traditions. ‘Sharing information on the religion is what we do with members of the mosque, but also with newcomers,’ Altaramsi says. ‘As a result, every month we welcome at least three converts to our community.’

Youngsters are crucial for the community because they will continue Islamic traditions in Bolivia. Islam prohibits alcohol and drugs. ‘These stimulants are part of contemporary life,’ Altaramsi acknowledges. ‘Nevertheless we try to persuade youngsters to adopt Islamic identities by showing them the rules of Allah. During the Quran lessons, they learn and read about how to be a good Muslim.’

Another part of being Muslim is eating halal food, which means food that is approved by Islamic law. It is very hard to find it in Bolivia. ‘Five years ago we started producing our own halal meat,’ Altaramsi says proudly. During the month of Ramadan, when Muslims fast from dawn until sunset, ‘about one hundred people come to our Mosque to eat this meat and share their spiritual experiences,’ he says.

The As-Salam mosque functions as an informal center where they teach the values and principles of Islam.

The Islamic Association of Bolivia also organizes sessions in which women come together to discuss Islam. I joined a gathering where all participants were either Bolivian converts or born as Muslims in Bolivia. They called me hermana, and were open about how they converted. Morah Bacinello converted eight years ago after growing up Catholic because Christianity didn’t bring her satisfaction. ‘I came to this mosque to try something else,’ she explains. ‘They told me about eternal life, and this especially caught my interest because I lost a son,’ she says. Bacinello adopted her Arabic name and, two years later, her children also converted to Islam. Now Allah is guiding their lives.

Little by little, Bacinello has taken up the Muslim lifestyle. The separation of men and women is one of the key differences she has had to get accustomed with. ‘This process develops gradually,’ she says. ‘Over time you grow along with the faith that will embrace you for your whole life.’

Like many Muslim women, Bacinello wears a hijab, but only two years ago she started to use it in public. ‘I never had any experiences with people approaching me in a negative way,’ she says. ‘In general, people in Latin America are more spiritual than usual, and perhaps more tolerant in terms of religion.’

‘Some people look at us in a suspicious way,’ says Amina Morales, who was known as Marilin  fourteen years ago, before her conversion. This might have to do with the limited knowledge some Bolivians have about the religion. ‘I have even met people who have never heard of Muslims,’ she adds and shares a laughable experience in which people thought she belonged to the Hare Krishna community. ‘We also wear loose-fitting clothes, but Islam is very different,’ she says with a smile.

When I leave the mosque, I find myself outside on the street, back in the vivid neighborhood of Sopocachi. I look at the mosque, which has a golden minaret on top, and think of my conversations with the faithful inside. People are walking down the hilly road, not knowing what is happening behind the walls of this intriguing place. They disappear in the bustle of La Paz, where the members of the As-Salam Mosque also work, live, and thrive.