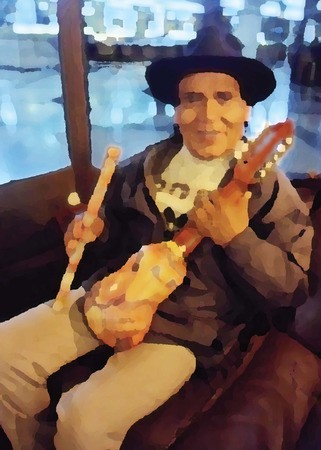 For many well-known Western musicians, success means profit and fame. A stereotypical Western pop star has a handful of number-one hits, with merchandise mounted on the walls of hormonal adolescents.

But for Leonardo Egúsquiza (a regular hit at Sol y Luna as part of the Negringo duo), commerical Yani, or American, music, says more about glamour than genuine musical talent. Moreover, he asks, why should music be defined by its commercial value? For Leonardo, a self-taught guitar maestro who could not afford the conservatoire admission fee, music should be del corazón.

Likewise, the charango movement in Bolivia defies the economical exploitation of music. Talented musicians such as Mauro Nuñez, who composed and performed new pieces all around Bolivia from 1944, and Ernesto Cavour, who founded el Primer Museo del Charango in 1962, have helped re-popularize the small instrument. Its accessibility means it can belong to everyone.

Furthermore, music is often played to celebrate nature, such as in the annual harvest celebration. The charango teachers at el Museo de Instrumentos Musicales de Bolivia claim that growing up in the countryside fosters a musical ear because children are not bombarded by urban noise pollution, such as horns, the screeching of cars and blaring pop music. Bands such as Axis of Awesome parody the repetitiveness of this music by showing that the majority of hit singles are based on the same four chords. Conversely, charango players are not limited by their ´best-selling´ formulas. Indigenous folk musicians don´t tune their instruments according to a particular scale. They simply tune by ear.

However, pastoral quaintness is only one side of a darker history to charango music. When the campesinos were employed in the mines, they brought the charango with them. The charango became an instrument of the oppressed, which spoke where words could not. Sometimes, charango music was a cry of anguish, played at funerals. But mostly, it was a form of escapism. Along with aguardiente and coca leaves, music provided release from a long, hard day at the mines, where shifts could be up to twelve hours-long (during which time the miners could not see daylight) for up to four months at a time. Charango songs were upbeat and lively. For instance, kalampeo (a Quechua word which means ‘to tap your feet’ ) originated in the mines.

The relationship between music and miners lived on long after nationalisation of the mines in 1952, when forced labour was abolished, compensation promised and the three principle mines expropriated. Although mining conditions have improved since the 15th century, when African slaves were forced to work as acémilas humanas (human mules), the life expectancy of a miner is still only forty years old. Given such tough working conditions, it is unsurprising that miners’ song lyrics ‘often evoke an idealistic future.

‘Aguas Claras’, by Kalamarca, is a song known to every Bolivian schoolchild.

Throughout Bolivian history, the charango has provided solace to the miners, soldiers and prisoners alike. Bolivian prisoners of war could exchange their poncho for the right to strum away their sorrow at the feet of their jailers. Uncaptured soldiers used it to raise morale and members of the Bolivian army would prepare for battle by slinging a gun over one shoulder and a charango over the other.

But while oppression in the mines and bitter wars have faded into Bolivian history, charango playing remains alive in annual festivals and competitions such as the Congress of Charango in Sucre (which happens in May) and the November festival of Alquile, where prizes are given to both crafstsmen and players. Young stars like Isabel Flor, the 12- year - old winner of the Charango de Oro Festival in Aquile, are preserving its magic for posterity. ‘If great people can do great things, so can we’, she smiles. Despite her talent, Isabel´s potential income as a musician is by no means guaranteed. Leonardo claims that by playing traditional music, he earns just enough to get by, whereas many other folk musicians don’t ask for money at all. After all, music is measured in beats, not bolivianos.