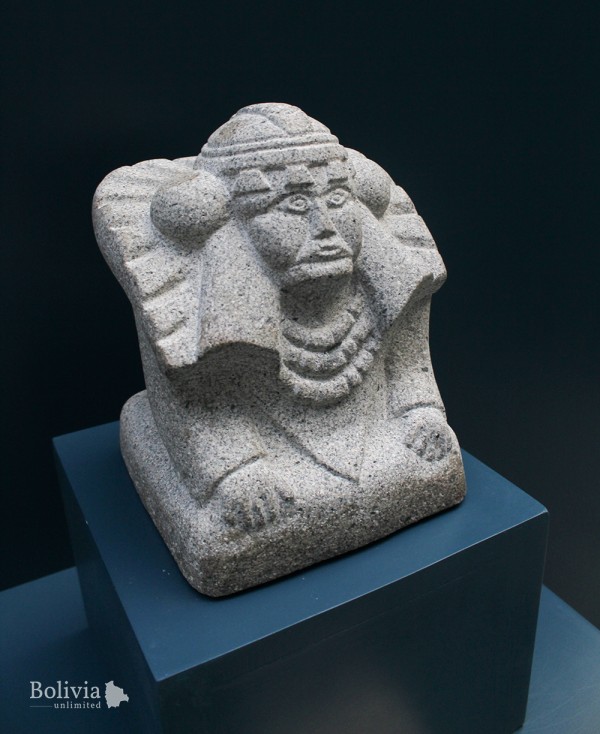 The Museo Nacional de Etnología y Folklore (MUSEF) in the centre of La Paz, is one of the most prestigious and popular museums in Bolivia. It boasts a collection of more than 30,000 cultural artefacts, with exhibitions that display a wide range of traditional vestments and craftsmanship, among other items. Its new exhibit of beautifully intricate stonework, which is part of the cycle La rebelión de los objetos, continues the museum’s mission of preserving indigenous identities and spreading the cultural heritage of the diverse ethnic groups that make up the Bolivia we see today. The future of the museum looks bright and promising, with exciting new ventures on the horizon, including the ambitious and innovative project of the Portable Museum, or Museo Portátil.

The idea of the Portable Museum was conceived in 2013 in conjunction with the cycle of exhibits entitled La Rebelión de los Objetos (The Rebellion of the Objects) that revolutionised how the museum organises its collections. The structure of the exhibitions begins with a focus on raw materials, such as textiles, ceramics, wood and metals; proceeds to displaying objects crafted from these materials, such as ceremonial masks, colourful feather headdresses and metal weapons and tools; and then illustrates the social functions of the objects.

In August, the cycle of materials and objects is moving forward with the new exhibit of stonework. From displays that detail the process of mining precious gems and regular stones, to exhibits that celebrate the vast array of sculptural and architectural achievements of indigenous civilisations in Bolivia. The objects are shown in their respective contexts, connected to the history of the peoples who used them, and thus they are brought to life as an interconnected cultural tapestry. According to Elvira Espejo Ayca, who has been the director of MUSEF since 2013, ‘The objects begin to shout, saying: I am identity, I am culture, I am science, I am technology, I am economy, I am history. In short, they constitute a complete whole.’

The MUSEF team aims to expand the museum’s activity beyond the colonial building of that houses its impressive collection.

In addition to conducting extensive anthropological and archaeological research, the MUSEF team aims to expand the museum’s activity beyond the colonial building, known as El Palacio de los Marqueses de Villaverde, that currently houses its impressive collection. The Museo Portátil programme seeks to bring the exhibitions to communities outside of La Paz that normally wouldn’t have access the museum and its resources. The programme consists in setting up tents or stalls with photos and even 3D replicas of the artefacts from the exhibits and hosting educational workshops to teach people about the history of the objects.

Milton Eyzaguirre Morales, head of the MUSEF’s Extension Unit and overall supervisor of the programme, explains the social mission of the initiative: ‘When we take the Portable Museum to these communities, the people learn about themselves, fundamentally because they see objects that their own people have made.’ According to Eyzaguirre, there is often a feeling of surprise amongst the public in rural communities when they ‘recognise themselves in the exhibit.’

The MUSEF team also works with teachers and community leaders to help explain the history of their ethnic group and its original language in Quechua or Aymara, for instance, rather than in Castilian Spanish. The Museo Portátil is a way of celebrating Bolivia’s cultural heritage with the people themselves, the very people whose ancestors created the artefacts that are now on display in the city.

The Museo Portátil brings the exhibitions to communities outside of La Paz that normally wouldn’t have access the museum and its resources.

Some museums might treat such artefacts in a way that reduces them to soulless details on a timeline or aesthetic trinkets hanging lifelessly on the wall. MUSEF’s vision, however, is interdisciplinary and in touch with the reality of the objects. With the expansion of its collection and its Museo Portátil programme it will help preserve the memory of Bolivia’s rich and diverse indigenous heritage.