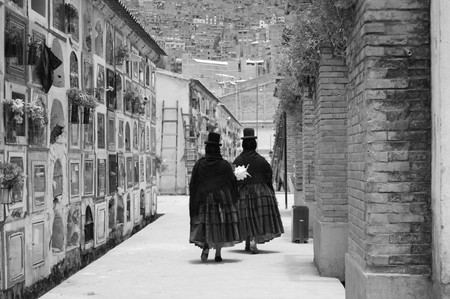 The Journey the Living Must Make for the Dead

‘Okay, so you just stay quiet because we don’t want them to find out you’re a gringo’, my friend ordered me as we walked into the main office of the cemetery. While one can learn much from the mourning rites which immediately follow the death of a loved one, I was keenly aware that this was but part of a much larger process which unfolds over weeks, even years. I set out to investigate which steps a family in La Paz has to follow after a wake. Learning about such things presents all sorts of challenges given the sensitive nature of the topic; people don't readily offer this kind of information to people who are merely curious. In order to get closer to the topic, a friend and I decided to act as if the mother of his empleada was on her deathbed and we were trying to help with the funerary arrangements. While I felt somewhat insensitive doing this—especially when I realized the couple in front of us was planning the funeral of their eight-year-old son—it showed me how Bolivians say goodbye to those they love.

Only being familiar with festivities associated with dying, I was interested in discovering what, exactly, happens when someone dies in La Paz. Having talked to some locals, including my Spanish instructor Roxana, I learnt that on the day that someone dies, a loved one washes the body, then dresses it in the deceased’s best outfit. The body remains at home in bed while friends and family pay their respects. Throughout the night, loved ones talk amongst themselves, praising and remembering the deceased. Coca leaves, alcohol, cigarettes, and flowers are placed near the body as talismans and the family begin to acullicar—chewing each coca leaf while giving the departed a compliment or speaking of a fond memory. This frequently goes late into the night; the mourners kept alert and awake by the coca leaves.

The General Cemetery is a neighbourhood all to its own. Outside its walls are flower markets, funeral homes and tombstone shops—just about everything needed for a funeral. Plaques can be personalized and tombs ordered. Prices range widely depending on quality of materials. There’s heavy marble in princess pink for those with a little extra cash and basic glass covers to decorate the graves of those less wealthy.

In the cemetery itself, there are gorgeous mausolea with ostentatious sculptures next to shoebox-sized graves with cement tombstones. The cemetery is currently divided into three sections which include cuarteles, pavillions, mausolea, sarcophagi and tombs.The variety in social class is laid bare in this anthropological library of the dead, in which innumerable bodies are stacked together. Occasional vacancies can indicate that someone’s family is no longer able to pay rent for a plot, making room for the new dead. Indeed, when one considers how ancient and packed the cemetery currently is, it’s natural to ask where the new dead bodies end up. As Jaime Saenz pondered in his seminal Imágenes Paceñas: ‘Why doesn’t the cemetery get any bigger?’. The municipality’s figures indicate that 95.6% of the cemetery is currently occupied, and that there are 15-17 daily burials. In 2008 there was room for 106,681 ‘inhabitants’, 25,330 places of which had been sold in perpetuity. 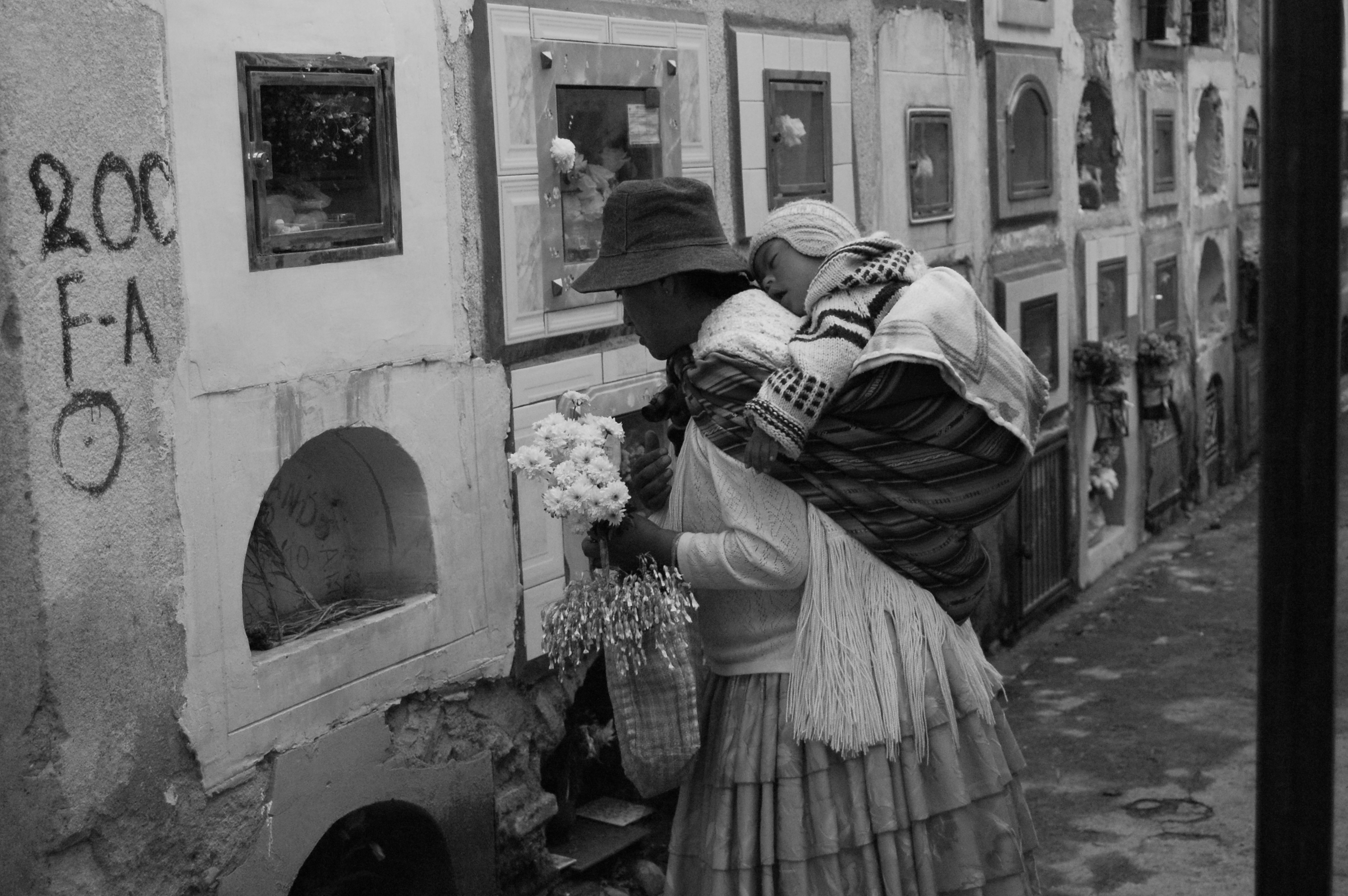 We walked into the cemetery’s administration office and asked the attendant the price of a burial plot. After giving us several brochures and price lists, the man explained how we could pay. To purchase a plot in perpetuity would cost 11,000 Bolivianos (US$1,570), or over 10 times the minimum monthly wage in the country. We were also offered the option to rent out a plot until the expected death of our empleada’s mother.

We made our way down to Avenida Busch, the Fifth Avenue of funeral homes in La Paz, the most famous of which is probably Funeraria Valdivia. As we stood outside and discussed our game plan, a man greeted us and politely asked if we needed help, so we proceeded to explain our situation. He led us into the funeral home and up a small flight of stairs to a room full of coffins. He had a distinctive used-car dealer’s hustle, a likely indication that we were dealing with a highly competitive market. The man’s routine involved walking around opening the coffins and their viewing windows built into the lids. I learnt that the purpose of these was to allow mourners to look upon the dead during the wake, as well as seconds before the coffin descends underground, or into one of the countless nichos in the cemetery. With a coffin purchase, the funeral home would pick up the body from wherever it may be (at hospital, at home), then bring it to the desired venue for a proper ceremony. Then, a bus would be provided to transport the funeral party to whichever cemetery was chosen by the family. The staff could even make the arrangements for the burial plot as part of a fully inclusive package. 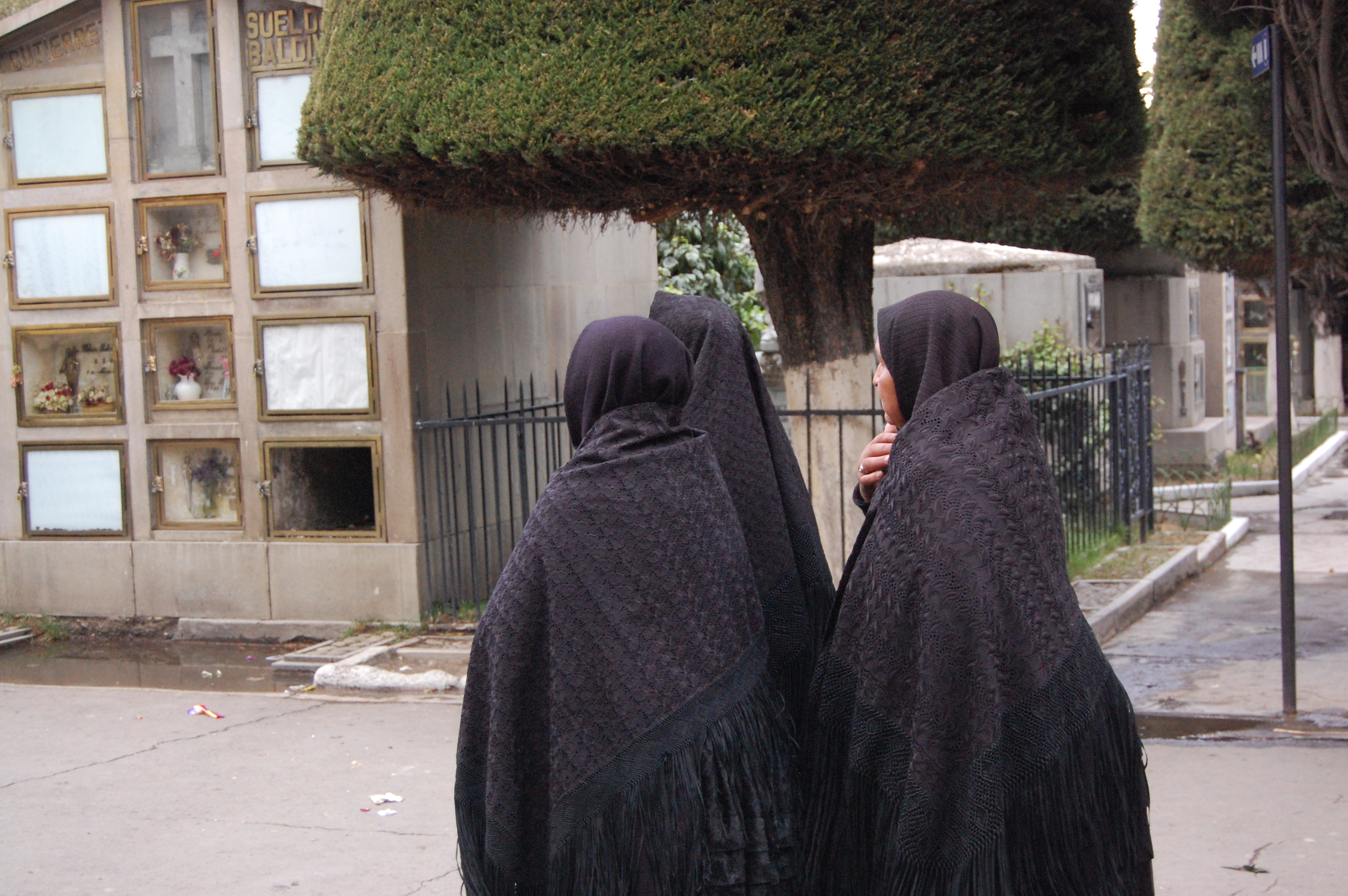 The funeraria agent spoke quickly, trying to persuade us to take the deal, as if he were narrating a commercial for some type of ‘as-seen-on-TV’ household gadget. We went downstairs to see the modern funeral parlour and he continued with his pitch. Mid-sentence, he asked us how old our empleada’s mother was. “Seventy-three,” my friend said, thinking on his feet, “she’s convalescing at home...so that’s where you can plan to pick her up.”

At the end, we were given business cards as we walked out the door and we said that we’d call later that afternoon. Whilst it felt uncomfortable at times to make up a story to understand this process, it gave me a good insight.

A walk through the cemetery shows how alive these dead people really are. Flowers decorate the graves, along with some of the deceased’s favorite objects. The graves of children are decorated with candies and the elder deceased have things like candles, miniature Coca-Cola bottles, and cigarettes. It is as if the person were only sleeping, not gone forever.