(Mis)Reading between the lines 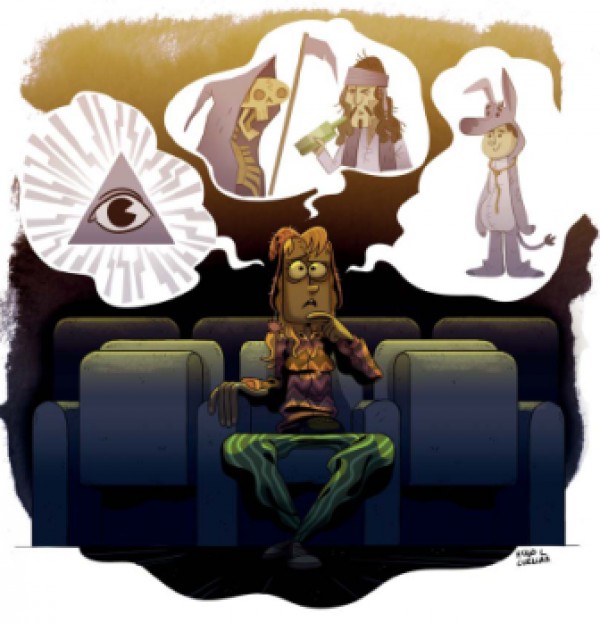 A gringo’s attempt at watching a play in Spanish

I’m as gringo as they come. The only Spanish I knew before coming to Bolivia was ‘hola’. I even bought a jumper with alpacas on it the other day. And yet, I’ve decided to see a play in La Paz entirely in Spanish. Why do I think I will understand it? Probably my white Western arrogance that everything is meant for me…

So here is my summary and review of the local play El Proceso por la Sombra de un Burro. Google translate says it means ‘The Process of the Shadow of a Donkey’ – but I have less than a shadow of a thought on what in the world that could possibly mean. Lucky for me, the play told a lot without words.

The stage set was particularly telling. There were always three gold arches in the background, that could mean anything, but everyone knows that three is the Illuminati’s number. It was obvious to me that they were sending a message to the audience: the Illuminati is everywhere. The power of the Illuminati is incredible and I, for one, pledge my undying allegiance to them because they are definitely reading this article (they know everything).

I could tell one of the main characters in the play was a peasant because he was wearing a rope belt. The other was a guy in a black suit who liked fedoras more than my ex-boyfriend. They appeared to be fighting over a human slave in a donkey onesie, which was terrifying because there were kids watching!

The two men went to court over who would get the donkey-slave. When the peasant went home to tell his wife about his plight, she had an epiphany that slave ownership is wrong. I think she complained to her friend about it, who apparently didn’t understand the issue (I guess in this alternative universe, having slaves in donkey onesies is common behaviour?). The woman decides to leave her husband, which, in my opinion, was the right call.

She then seemed to visit a witch, and gave her some gold. I’m not quite sure what the witch gave her in return, but hopefully it was something either to help her get over her broken marriage or to start a new life (maybe she wants to be an apprentice witch, that would be cool).

They were sending a message to the audience: the Illuminati is everywhere.

The witch then visits someone very rich – I know this because he was wearing the fanciest gown I’ve ever seen outside of RuPaul’s Drag Race. She performed a hypnotising dance for him, probably to put him under her spell. Now with a blue-blooded man in her power, she could control the entire town!

This is where things get kind of dark. A person in a long, black cloak covering their face bribed an alcoholic pirate (who looked like Captain Jack Sparrow) to set fire to the village. It was probably Death, history’s great equaliser, who could no longer stand the horror of slaves being forced to wear donkey suits.

So fire cleansed the village and the donkey was free! With her new-found freedom, the donkey stood in the rubble of the destroyed town and chastised everyone for their behaviour. After her dramatic oration, she left, hopefully to start a revolution against slave-keeping monsters.

Even without understanding the dialogue, I’d rate this play 4.5/5. It has the excellent message of abolishing slavery and encourages everyone to revolt against the class system. The only thing that could be improved is the advertising, because there were kids as young as four in the audience and some of the themes were way too advanced for them. Either that, or I totally misunderstood the show, in which case, they should also include subtitles.

Disclaimer: This piece is a work of satire, and not intended to be taken seriously in any way. The cast and crew of El Proceso por la Sombra de un Burro put on an impressive, enjoyable show.