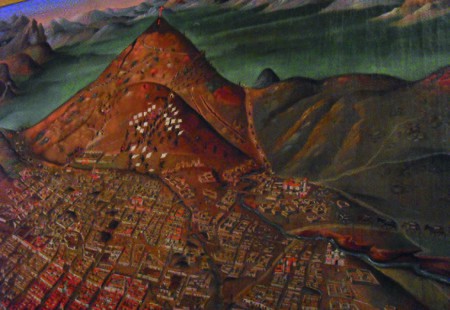 It is a well-known story. In 1492, the forty-one-year-old Christopher Columbus, a then unknown Genoan sailor, convinced King Ferdinand and Queen Isabella of Spain to fund his voyage to discover a western maritime passage to the Far East. With the rich rewards that the ‘Capitulations of Santa Fe’ promised, whereby Columbus would attain the rank of ‘Admiral of the Ocean Seas’ and Viceroy and Governor of any new lands he claimed for Spain, he embarked upon an unprecedented journey. In October, after a journey greatly facilitated by his knowledge of the Atlantic trade winds, Columbus and his crew sighted land. He landed at what is presumed to be the Bahamas - which he christened San Salvador-, and became the first European to ‘discover’ the Americas. Columbus however, maintained that he had not discovered the ‘New World.’ Rather, he had unearthed a new sea-route to an old world, that of the East Indies.

Fast-forward forty years to 1533, and the Spanish conquest of the Inca empire was nearly complete. Present-day Bolivia was known as Alto Perú and was ruled by the Viceroy of Lima. In the first one hundred years of Spanish imperial rule, 250,000 Spaniards migrated to Alto Perú, and would continue to colonize the country for the following 300 years. But who were these Spanish migrants?

The New World was a distant, daring and dangerous prospect. The passage across the Atlantic in wooden ships was harsh and exhausting, and whilst the prospective riches loomed heavy on the horizon, there was no incentive to engage in such a risky pursuit when one had relative stability in Spain. Thus, the well-to-do families tended not to colonise the New World. At the same time, society’s poorest could not afford to make the journey. The crossing was costly, and those peasants stagnating at the bottom of Spain’s social hierarchy were in no position to participate in the creation of the Spanish colonies.

It was a middling and marginalised individual that took the gamble of packing up his existence in Spain and setting out for the great unknown. Poor journeymen and the illegitimate children of impoverished gentry set sail for the New World, not artisan craftsmen and the sons of major landholders. As Herbert Klein acknowledges, ‘it was, in short, the lowest groups within the potentially upwardly mobile classes who left for America.’

Upon arrival, migrating Spaniards discovered a greatly undeveloped continent compared to their native Spain and, for the very first immigrants, a country plagued with militaristic conquest.

The challenge of migrating to the New World was inextricably linked with the promise of riches and exploitation, and the nature of the proceeding conquest was exacted with this in mind. In the absence of Spanish peasants,indigenous peasants formed the bottom tier of the social hierarchy. Without any competing institutions or classes, the migrating Spaniards received an instant elevation from their social position in Spain.

In such unusual circumstances, the establishment of a permanent Spanish society in South America became a reality from the very beginning of the emigration. Regardless of their former status in Spain, their perceived cultural and racial supremacy placed any Spaniard above an indigenous Bolivian. Where once the titles Don and Doña were restricted to the elite, by the second generation of conquistadors they were being more generally applied to all whites.

The migrating Spaniards arrived very much aware that both posterity and God would judge them by their actions in the New World. The first product of this mindset was a fervour for conquest, construction, and religious conversion.

In the early 1540s, the Spanish conquistadors felt confident enough to push south in a bid to extend their rule, and their efforts were met with the rich re- ward they had hoped to attain. Whilst the pursuit for the mythical El Dorado was entirely futile and unfruitful, silver- rich Potosí exceeded the wildest hopes and dreams the Spanish held for the inestimable treasures of the New World. Founded in 1545 as a mining town, Potosí became the most populous city in the Western Hemisphere. By 1600, its population of 150,000 likely exceeded that of London, and Spain was bankrolled throughout the sixteenth and into the seventeenth century by the silver that left the cavernous mouth of the city’s mountain.

The Spanish conviction in their New World activities established a vibrant chronicle tradition, which greatly aids our understanding of the migration. Bartolomé Arzans de Orua y Vela was born to first-generation Spanish parents in 1676 in Potosí, and his epic work chronicles life in the city and elsewhere in Alto Perú.

Despite the immense riches beneath Cerro de Potosí, life in Alto Perú, and particularly in the city of Potosí, was described by Arzans as proving very
challenging for the migrant Spanish residents. The immense altitudes in Bolivia were novel and formidable. At over 4,000m, Potosí greatly exceeds Spain’s highest point, and it made childbirth a real difficulty. Arzans chronicles how a majority of the first children born in Potosí bore the name of Nicolás, a result of desperate Spanish parents naming their firstborn sons after the San Nicolás de Tolentino (the patron saint of difficult births), in a bid to secure a safe delivery.

The wealth a man made in the New World however, and his improvement in social standing, was non-transfera- le. Settlers could not assimilate into the Spanish nobility and rub shoulders with the Iberian gentry should they decide to return to Spain, despite at taining such a standing in Alto Perú. The product of this scenario was the creation of a permanent migrant community from the very beginning.

This societal structure that was crafted in Bolivia in the sixteenth century has remained remarkably intact over half a millennia. The large indigenous population continue to exist at the bottom of the socioeconomic structure, whilst the small elite are of European descent. A 2006 paper by the Oxford Department of International Development (ODID) revealed the extent of horizontal inequality (economic disparity does not stem from any difference in intelligence and skills) in Bolivia, putting into academic writing what is immediately apparent when one spends any amount of time in Bolivia.

More than a third percent of indigenous Bolivians live in ‘extreme poverty’, compared to just 12.8 percent of non-indigenous almost three times greater. Not until the 1952 Revolution could indigenous Bolivians vote or even go near La Paz’s Presidential Palace in Plaza Murillo. Pale-skinned European descended elites continued to rule until Evo Morales was sworn in as president in 2006, which brought the first indigenous Bolivian leader to power in a country with a an indigenous majority.

The same ODID paper cites a survey of Bolivians that revealed that nearly two out of every three Bolivians believe their ethnic or racial origins affect their chance of employment in the private or public sector. Of those who identified as indigenous, 76 percent believed ethnicity had an impact on their working possibilities. The plight of indigenous Bolivians is plain to see and persistent.

Evo Morales established a new constitution in 2009. It gave indigenous peoples unprecedented rights, championing native culture like the coca leaf, making symbolic gestures such as the adoption of the wiphala and more active reforms such as the 2006 redistribution of 77,000 square miles of land to Bolivia’s poor population.

When one wanders the streets of La Paz, however, and sees the cholita stalls and the lustrabotas on every corner, or when one visits El Alto, where the population is 80 percent indigenous in sharp contrast to the European-descended residents one sees on the streets of Zona Sur, or even Sopocachi, the impact of the 500-year- old migratory wave from Spain is quite apparent. It continues to affect politics, social standing, and economic success. Perhaps no other global migration has had such a profound effect as that of Spain’s conquistadors.