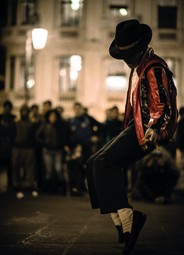 The King of Pop’s Spirit Lives On

The year 2009 was shadowed by the tragic death of Michael Jackson, but the legendary entertainer’s spirit was reborn in one of the most unlikely places: La Paz, Bolivia. Gonzalo Mamani, age 15, takes to his stage at Plaza San Francisco from Monday to Wednesday every week to re-lives MJ’s magical moves.

Gonzalo grew up listening to Jackson’s powerfully smooth tunes. ‘I like him alot—he inspires me’ is the shy young boy’s way of summing up the singer and dancer’s importance in his life. By studying Jackson’s music videos, Gonzalo learned all his signature moves—the moonwalk, the circle slide and the ‘up on the toes’. His excellent rendition of ‘Thriller’ is complemented by his black and red leather jacket, made especially for him at Mercado Illampu. He even has a sequined jacket and two stylish hats for other numbers.

Gonzalo receives some assistance from his proud mother, who helps him pack his props. His uncle has also taught him some magic tricks—’I love both magic and dancing’, Gonzalo says. Living with his mother and sister (who is not called Janet), Gonzalo examines each and every toe point and salto on the screen to perfect his next performance.

During the day, Gonzalo is just an ordinary kid, studying at school and playing football with his friends on the weekends. ‘Some friends show me new moves and we practise together’, he says of his buddies, ‘they really support me’.

Gonzalo plans to continue his studies, and then see if he wants to continue dancing. He can usually earn 80 to 100 bolivianos a day from the crowd that gathers where he dances. He can make more than this during large events and festivals. While he did not perform in the Gran Poder parade itself, he did perform nearby in Plaza San Francisco, alongside all the other sparkly and eccentric dancers of the celebration.

Even in the helter-skelter chaos of La Paz, Gonzalo has to obtain a permit to perform, which can sometimes be quite difficult. His fans, though, are grateful to see this Bolivian incarnation of Michael Jackson every Monday through Wednesday at his usual spot, dancing away to the joyful songs of the King of Pop.