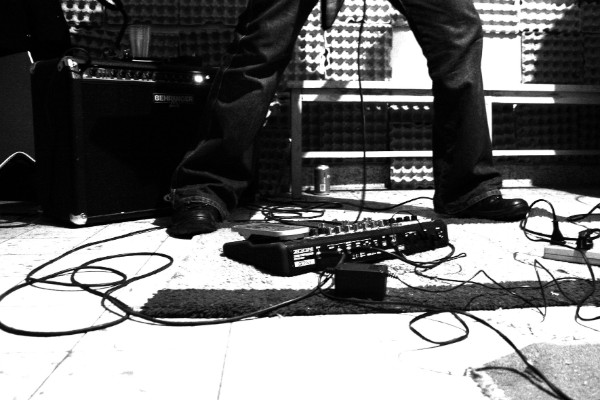 Something that may slap you in the face when you arrive in La Paz is the seemingly impossible combination of western modernity and its various local antidotes. In a society where half the people retain many of their Aymara customs, and where most people still partake in pre-Columbine rituals, there is scant room for deviance from these powerful influences - both ancestral and contemporary. Moreover, due to a strong Catholic influence in the city’s social and moral fabric, locals often exhibit a marked conservatism in their behaviour and tendencies, despite the seeming exuberance of traditional festivities (such as the entradas and carnival). One notable transgression can be found in ‘los Metaleros’.

Metal arrived to La Paz in the early 80s, a likely product of the rebelliousness brought about by the demise of oppressive military dictatorships. Paceños were likely drawn to it through the violently powerful volume of its music, as well as by the cataclysmic spirit of destruction it brought with it. Besides, back in the day when black was the new black, it was important to be seen to be doing your thing for fashion. Perhaps even a hint of Latin American tough machismo needs to be summoned to explain the rise of this movement. The most influential bands of this decade were ‘Sacrilegio’ and ‘Track’ which proved to be icons for ‘Metaleros’ in La Paz at the time.

In an attempt to get closer to metal in La Paz we wanted to go to a live concert. One dark and lugubrious Friday evening we made our way to ‘La Gri-feria’ only to find, rather disappointingly, a completely empty bar. The owner explained that the municipality made him cancel all the gigs until November due to complaints from the party- pooping neighbours. The fatality of this venue meant that ‘La Oveja Negra’ (in El Alto) is probably the only true Metal pub still open with regular performances. Disappointed not to see a live metal concert, we contacted the local metal band ‘Undead’ for an interview. Founded in 2000, they’ve recently re- leased a ten-track album ‘Beyond the Soul’, and even played a few songs for us during the interview.

BX: What kind of metal do you play?

BX: How did you decide to create the band?

Jaime: Marcelo and I met when we were young and we had the idea of forming a band. At the beginning, it was just us, and Marcelo didn’t even have a drum so he played with a key- board and assigned a different beat to each key. People kept on asking him if he played the keyboard in the band and he would say ‘No, I’m the drummer!’

After one of our first performances, at “La Kalaka”, in 2001, we disbanded for a while: we had discussed which songs to play beforehand but on the night Marcelo was so nervous he kept on playing the wrong ones. After the third ‘erroneous’ song, I lost it and we fought in front of the whole audience! After that we decided it was time to split. In 2007 we got together again and found three guys who wanted to play with us. We then played at “Sur Metal Fest” and shortly afterwards we lost our guitar player, and met Boris who’s been in the band ever since.

BX: What do you think about the status of metal in Bolivia?

UD: It’s growing. A few years ago, you always met the same people at metal gigs but nowadays, there are more and more people who like metal. How- ever, it’s still mostly an underground scene and still logistically difficult to organise. For example at the ‘Illimani Metal’ concert the organiser had to fill in loads of forms for just a 5 hour set, but if a ‘Cumbia’ or ‘Reggaetton’ group performs, it’s considered less of a problem. Bolivian society is still not open to metal but I believe that it’s the only kind of music which goes beyond time. I mean, if today people listen to Hanna Montana, tomorrow they’ll listen to if 15 years ago you listened to ‘AC/DC’ or ‘Sepultura’ in 20 years time people will still appreciate the music.

BX: So how did you each start in Metal?

Marcelo: I began playing the key- board and the bass and then I fell in love with the drums when I was 14. The first song I played on the drums was ‘Mutilación’. But as Jaime said, I began ‘drumming’ with a keyboard. I bought my first drum kit 8 years ago for $500 and I’m still playing it.

Jaime: At the age of 6 I was interested in the saxophone but then saw my first metal video and knew I wanted to be a rocker with long hair! The first song I played on the guitar was Nirvana’s ‘Come as you are’. My parents weren’t keen on me playing the guitar so, at 13, I began saving money: I used to pretend I was going out so they would give me money and I spent the whole evening sitting on a bench until it was late enough to go back home. After a few months, I’d saved $80. I asked my father to take me to the guitar shop and after he saw $80 was just enough to buy the cheapest guitar, he gave in and bought me a $280 Washburn. To begin with we played at friends’ parties, then friends’ of friends, and we progressed. In the end, my parents accepted it but I still studied because my real passion is music.

Boris: My family has always been really into music, so I began studying it when I was 8. At the beginning I was a pianist, a real one not a fake one, and I have used many keyboards in my life! My first band was ‘Nordic Wolves.’ Now I play the guitar with these guys and I feel very comfortable playing with them because they are very spontaneous and we completely understand each other.

BX: What does metal mean to you?

UD: Our lives are based on metal, of course we have to have something else beyond music, but the main thing in our everyday life is music, so sooner or later we hope to be able to make a living from it but we know that here in Bolivia it is nearly impossible so we have our professions for financial stability.

BX: One controversy surrounding metal is ‘Mosh’, can you explain it?

UD: ‘Mosh’ is the most elemental expression of ‘Metalero’ feeling, it is basically having fun listening to the music but it can get pretty aggressive and the ‘moshing’ depends on the type of band and music.

BX: You sing in English. Do you worry that people won’t understand?

UD: It’s easier to write and sing in English. In Spanish, it’s more difficult to find the right words and the lyrics are always secondary anyway, and it is more about the sound, so no!

BX: Is music a way of life in Bolivia?

UD: Music here is always just going to be a hobby. Money is the biggest problem for Bolivian artists and unforntunately musicians will always need a back up income until they go ‘inter- national’.

shahzaibsk
10 Feb, 2020 | 14:15
This is very appealing, however , it is very important that will mouse click on the connection: