MEET ME AT THE MOTEL 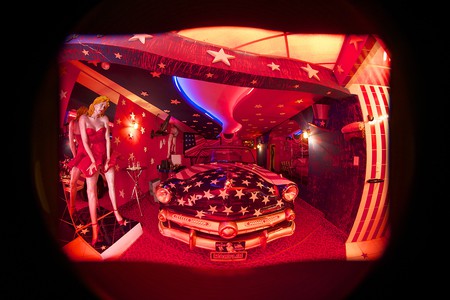 The door opens up into a hidden cave of treasures. I walk through a rounded tunnel; the ceiling, walls, floor--all a darkened gold of rocky texture--opening up into three small chambers. A shining sultry hot tub, with a sculpture of a buxom pirate suggestively leaning around it; a bed with the sides of a ship; a pirate’s flag and a chest of false jewels and gold coins that glisten in the dim lighting. The only odd element in the picture is a well-stocked mini-bar full of alcohol, sweets and condoms. This is one of the many fantasy rooms at Stop Time, a popular motel in La Paz, available to rent by the hour, 24 hours a day, 7 days a week.

In the English-speaking world, the word “motel” may conjure up seedy images of dirty rooms and somewhat illegal activities. In La Paz, however, these spaces range from luxurious fantasy rooms to small uninspiring car garages. If the latter option takes your fancy, you can drive up to Motel Garage in Sopocachi and enjoy a moment of privacy inside your own vehicle; shrouded, that is, by beige moth-eaten curtains and the faded colours of the motel’s pitiful bunting. However sordid this may seem to the foreign eye, these are spaces of freedom for paceños, young and old.

Beyond indulging far-fetched sexual fantasies, motels have become a necessary part of maintaining an active sex life in La Paz as a young adult. 'I would prefer to take a lover back to my family home, but my family is very machista,’ says a paceña in her twenties, who preferred to remain anonymous. ‘Some people’, she adds, ‘have extremely liberal parents and are able to do so,’ but this is certainly not the norm. Some parents are even afraid that their child’s one-night-stand might end up robbing the family home...

I set out to visit three different motels in La Paz to explore the draw of these varied establishments. All of them can be found in the vibrant and cultural district of Sopocachi, alongside a long list of other sleeping alternatives.

The motel Stop Time is perhaps one of the most famous in La Paz. Having opened over 15 years ago, it treats its clients to a choice of standard rooms for 78bs per hour, and other more elaborate rooms that enter the realm of fantasy. A pole (for dancing?), a sauna, jacuzzis and (of course) a fully-stocked minibar: yours for 158bs per hour.

Stop Time’s range of differently priced rooms caters to clients of all ages and backgrounds. According to my guide, younger clients tend to frequent the more economical rooms, although gossip tells of high class young paceños, or members of rich mining families, who hire out two fantasy rooms for the night and bring along several partners.

But that’s not to say that only young people visit these establishments. On leaving Stop Time, I caught a glimpse of a senior man drive up in his Mercedes and park his car in one of the spaces conveniently situated directly next to the rooms. He pulled the curtain half way across and let a younger woman climb out of his boot. It seems motel secrets exist for all generations.

The fantasy rooms at Stop Time are alternately bewildering, marvellous and shocking. They range from the sultry golden pirate cave to a disco-style Aladdin room. Past the mini moat, you enter the luxurious castle-themed King’s room. Three doors down is the “Hitler room”, featuring a portrait of Hitler covered in lipstick marks. ('This is the most feared room. Lots of people feel as if Hitler is watching them', commented our guide.) The workers at the motel do everything to ensure their clients’ enjoyment, offering discounts on staying longer than 3 hours and serving food to the rooms of those who stay the day after.

Stop Time’s biggest competitor is Motel Inn, a place that looks like a holiday resort or a European Center Parcs, with three types of rooms on offer: an economical room for 64bs an hour, a normal room for 74bs, and a Suite for 120bs. Anyone curious about the quality of the rooms will have to pay the motel a casual visit. The staff refused to give me a tour of the place and wouldn’t even answer my questions.

Motels in La Paz often prefer to stay out of the limelight. None of them advertise. The hushed-up part of the motel culture is part of what draws its clients. People seem to be aware that couples frequent these places, but not everyone is willing to talk freely about it.

Beyond the taboo, motels are also a place of young love and sexual exploration. Their social invisibility cloak seems to cover the diverse needs of La Paz’s population. Outside of the walls, life goes on in proper public fashion. Inside of the walls, is a private world with rules left open to interpretation.