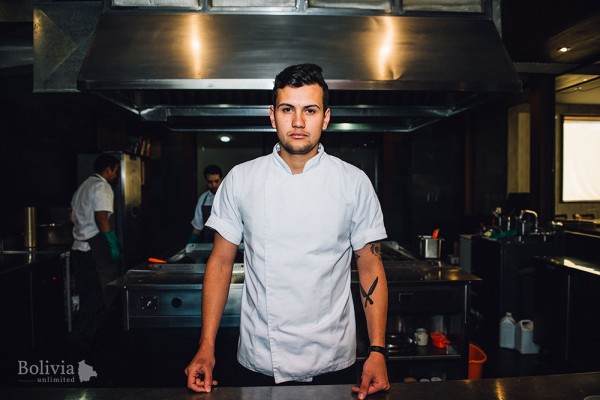 The young face of a new Bolivian cuisine

From the most succulent pork terrine and delectably crispy lamb mains, to a starter of alligator escabeche or pudding of milk whey sorbet, the food at Gustu is a world away from the city’s traditional choripanes or salteñas. I am in the Zona Sur, at restaurant Gustu, to meet head chef Mauricio López. Notably youthful for a chef de cuisine, he seemed remarkably calm and composed for a chef - though a tattoo of two crossed knives on his forearm perhaps discloses a more ruthless streak that would prove handy in the kitchen.

Mauricio tells me he did not always want to be a chef, but that he knew he loved cooking from a young age. ‘I was always cooking in my parents’ kitchen and making a mess,’ he says. But it wasn’t until he was studying administration in La Paz, still cooking whenever he had the chance, that he decided to pursue a career in his favourite hobby.

He spent a year knocking on doors at restaurants across the city. Finally, he came across a cookery programme offered by the Melting Pot Foundation, a charity established by Dane Claus Meyer. Meyer co-founded the restaurant Noma in Copenhagen, which was voted four times World’s Best Restaurant. A lofty door to knock on indeed.‘I sent my CV, went to a couple of meetings, was given a visa and was told I would be in Copenhagen in 10 days,’ Mauricio remembers.

Over the next three months, he interned in a number of European restaurants, including Noma, before returning to Bolivia and working for Gustu. He has been head chef since 2015, when he was only 25. He sees his position not just as a job, but as a true vocation. A real opportunity for him and his compatriots, using lessons in discipline, efficiency and artistry learned in Europe to reimagine Bolivian cuisine.

‘We don’t do traditional Bolivian food, that’s true, but we use the ingredients and we are all Bolivian, 99% of the kitchen is Bolivian.’ It is something of a unique ideology that Mauricio and his team follow. With stunning effect, they merge global styles and sensibilities with an incredible array of traditional Bolivian ingredients and techniques. ‘For example,’ he says, ‘right now we are working a lot with fermentation, we have made a miso soup with quinoa and it is amazing, super different to the traditional miso. Quinoa is a Bolivian ingredient, but you take it to another level.’

After more than four years of operation, the restaurant is an established player in La Paz’s culinary scene. Gustu’s craft is well renowned; it was listed No. 14 in Latin America’s 50 Best Restaurants in 2016. Yet its history has not always been a smooth one. Last year, the New Yorker reported that Gustu was not making a profit. When I ask Mauricio about the sustainability of the business, he admitted that, ‘it was hard at the beginning. We had to take care of our numbers and try to balance our social impact.’

The social impact Mauricio refers to is the Manq’a project, an initiative funded by The Melting Pot Foundation. So far, they’ve trained 3,000 students in cookery schools in El Alto and La Paz. ‘We are now in the fifth year, and we are sure the restaurant is sustainable,’ Mauricio beams. ‘To ensure that, we also have side businesses like our deli and our bakery, from which we sell bread to different restaurants, and catering services.’ Such services have included weddings, corporate events and Evo Morales’ 2014 presidential inauguration ceremony.

When I suggest that some critics argue that Gustu is too elitist to have any relevance to none but the wealthiest of La Paz’s Zona Sur, he defends the restaurant: ‘I am pretty sure that if someone actually ate at the restaurant they would change their opinion. We have the same prices as other restaurants in La Paz. The idea is to not be exclusive. We hate that word. We want to show what we are doing to most Bolivians.’ This does not quite ring true, as prices remain far beyond the reach of ordinary people, although Mauricio claims that 60% of Gustu’s customers are now locals, up from 20% at the time of opening. After looking around at other tables on a busy Thursday evening, I think he might be right.

Certainly, Mauricio’s belief in the value of what he does is captivating. I ask what he hopes for the future, and he does not answer for himself, but for the restaurant and Bolivian cuisine generally. ‘I want to see Bolivians go out to eat more. I want there to be a scene. It is happening in Santa Cruz, and growing slowly, but I want there to be a big market. Once the market is there, big changes will come, and Bolivian cuisine will really take off,’ he hopes. When I push him to say what he really wants for himself, he is similarly open-minded and generous to his colleagues. ‘As we become more of a machine that works by itself, and more chefs de partie and sous-chefs come through, I will need to look beyond Gustu and start my own venture.’ Genuinely passionate, trained across the world but proudly Bolivian, I cannot wait to see what he does next.