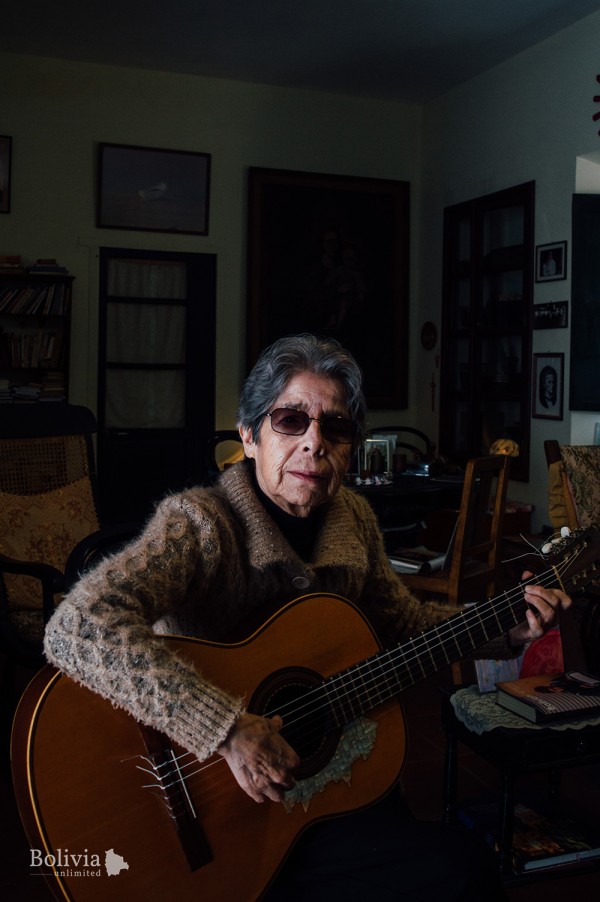 The voice of Bolivia’s poetic song

Upon opening the green gate of a house in the centre of Sucre, I was overcome by a sense of tranquillity when I saw the kind face of Matilde Casazola. Throughout my life, I’ve read her poetry and heard her songs, with their remarkable lyrics and beautiful melodies; this is a woman whom I’ve admired for a long time. She invited me to come into her living room, where even the walls and the furniture seemed to emanate an artistic charm.

Born in the city of Sucre in 1943, Matilde Casazola’s life has always seemed bound to art. Her grandfather was the writer and doctor Jaime Mendoza, who left a legacy of investigative work on mining and rubber workers in Bolivia. Matilde’s sister, Gabriela, was her playmate as a child, and they would write and recite poetic pieces together. Her mother, Tula Mendoza, was a poet and composer from Potosí and her father, Juan Casazola, was a language teacher. Matilde’s family strengthened her artistic spirit, encouraging her musical and poetic inclinations. ‘Ever since I was a little girl I’ve always loved poetry. I grew up in a very open-minded household. We all loved music and art. Poetry has always been present in my life, since the very beginning,” she notes.

Matilde started writing at the age of eight, mainly about nature and her surroundings. During her teenage years, she took music classes in the Escuela Nacional de Maestros de Sucre, where she started learning the piano. Ultimately, however, the guitar was her instrument of choice, and she had classical guitar lessons and private music classes with Spanish musician Pedro García Ripoll.

Patient and serene, she tells me about the experiences that have shaped her life. ‘In my nomadic years,’ she says, ‘I met an Argentinian artist whom I married and we travelled to different places together.’ While travelling with her husband, Matilde would put on puppet shows and it was through this that she started writing. Initially, she would only share her poems and songs with her closest friends, but she soon realised her lyrics and melodies needed to shared more publicly. ‘Composing and writing stopped being a hobby and became a passion for me. Later, it became a way of life,’ she says.

Her first poetry book was published in 1967, a time when she and her husband Alexis Antíguez were in exile. Alexis was suspected of having ties with Che Guevara’s guerrilla group, so they spent many years in Argentina. ‘During that time I was finding my voice as an artist and developing my writing,’ she says. After returning to Bolivia in 1974, Matilde began giving guitar lessons and doing recitals in La Paz, nurturing what would later become the legendary voice of Bolivian poetic song.

‘I’ve always loved simplicity. I like performing on small stages, singing songs about life and everyday themes,’ Matilde says, in a modest and sincere tone of voice. Staying true to herself, she started to play more intimate concerts and to compose songs known for their strong poetic message. Thus she gained a legion of fans who fell in love with her style of songwriting and performing. I myself found her songs to be a comfort when I was far from home, living away from Bolivia. I would sing one song in particular from the bottom of my heart, ‘De Regreso’ (‘The Return’): ‘From afar I return./ I already have you in my sight./ I’m already gazing at the silhouettes of my mountains in your infinite horizon./ From afar, from those horizons that I’m escaping,/ today I’m returning to your infinite horizon Pachamama, Pachamama…’

Countless Bolivian artists have interpreted ‘De Regreso’ as well as many other songs of Matilde’s. Singers such as: Luis Rico, Emma Junaro, Nery Gonzáles, Victoria Sur,  Mayra Gonzáles, Willy Claure, Cubayande, Sonia Pol, Gustavo Orihuela, and Gitte Palson-Juan Carlos Cordero, among others. Her lyrics and melodies carry with them the spirit and energy of a woman who creates from the heart.

‘My poetic works have often come to me in the darkness of sleepless nights, that is to say they’ve sprung from my conscious as well as my subconscious thought, and more or less in an onerous state. Melodies arise in my mind; they enchant me, and I try to memorise them. The majority of these melodies come with a poetic idea, too, so trying to decipher them and put them on paper is an interesting adventure,’ she says.

As Matilde reads from Volumes I and II of her autobiography I’m touched and struck-dumb by her subtle voice. Her readings are full of meaningful pauses and fitting rhythms. Volume I includes poems such as, ‘Siguen los caminos’, which speak of her travels in the years between 1970 and 1973. These writings are full of honesty. Although one can sense a social message in her work, Matilde clarifies that the meanings in her poetry tend to represent something more human. Beauty is an important element for her. ‘Life has a marvelous side to it,’ she says. ‘And it’s down to us to make it more heartfelt, more beautiful.’

Like many writers, Matilde has admired other authors and composers such as Federico García Lorca, César Vallejo, Jaime Mendoza, Ricardo Jaimes Freyre, Pablo Neruda, Primo Castrillo, Julia Prilutzky and Jaime Saenz. ‘Great authors influence the life of a writer,’ she explains. ‘As a writer, it’s important to familiarise yourself with the life and works of other artists.’

Volume II of her autobiography features some of Matilde’s illustrations from when the artist fought against and beat tuberculosis. During her illness, Matilde discovered that there was a poetic side to pain, and began to express this through drawing. And these simplistic yet powerful drawings complement the texts they accompany.

There were times, however, when Matilde  did not write, sometimes for as long as two years. During one of those periods, her husband bought her a typewriter and, although Matilde did not know how to use it at first, it helped her to write again. ‘After not being able to create for that long,’ she remembers, ‘I started to do it on the typewriter. Using a machine didn’t disrupt my artistic energy. I remember using it to write a poem that flowed from me as though from ink onto paper.’

Matilde Casazola’s lifelong career as an artist has made her a female icon of Bolivian culture. In 2016, she received the National Culture Award. Today, she is working on a new album of unreleased songs. ‘I’m working from the inside,’ she says. ‘I’m preparing some 12 unedited songs. I’m reworking them for the guitar to make a new album. It’s a project that takes time.’ In the meantime, however, she is already thinking of putting together a third volume of her poetic work. Thank you, Matilde, for your poetry.