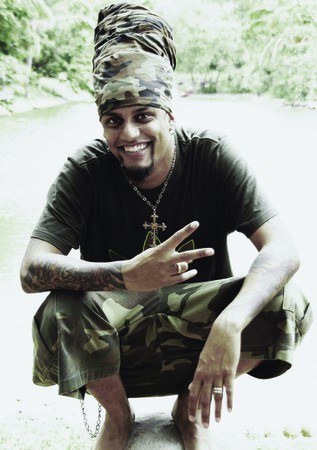 If you have been to TTKOS, Parque de las Cholas or Tercer Festival Intercultural del Amor these last two months you may have come across the reggae-hardcore fusion act that is Matamba y Zion. Although originally from Buenos Aires, Juan Carlos Chiorino Basurco (Matamba) has been living in Bolivia since the age of ten and is firmly rooted here, with musical links in both La Paz and Santa Cruz. Matamba has accompanied many established artists such as Shakira, The Black Eyed Peas and Los Pericos and on the 21st of September will kick off his international tour in Tacna, Peru.

When and why did you call yourself Matamba?

It’s a nickname I was given when I was still in school in Santa Cruz. There was a footballer there who was dark skinned like me and he had the last name Matamba. As well as this, a ‘matamba’ is a palm tree. I’m very tall and thin and had curly hair, which made me look like a palm tree.

What was the inspiration for you song ‘Favela’?

In Latin America we have a lot of ghettos; in some places they’re called ‘villas’, in Chile they’re called ‘poblas’ and in Brazil ‘favelas’. Here in Bolivia they’re called ‘villas’. These are marginalised places where people don’t give a damn, people live there because they’re drug addicts, part of a gang, bad people in society… these people get labelled slum dogs, outcasts. For example in an office if something goes missing and someone from a villa is working there, the first suspect will usually be him.

So the song is meant to eliminate stereotypes?

Exactly. This is why the lyrics say “Favela nao da para ficar triste”, ‘The Favela isn’t a reason to be unhappy’, it’s like a gift. The people of villas are born fighters because in a villa life is much more complicated.

Do you have Portuguese connections?

I have family roots in Salvador de Bahía so I can speak Portuguese.

Do you think that it is difficult to be a young artist in Bolivia?

Yes. The struggle never stops, the fight is on all sides. There are stereotypes about music, you are always perceived as having some sort of drug or alcohol problem, or are called bohemian or a ‘good for nothing’, the type who sleeps only with his guitar wherever he can. So people don’t take many musicians seriously, they treat them badly. You often smoke weed, so yes, it’s a problem. And then there’s financial support – often people support other types of artists, there are other cultural worlds too. I don’t have anything against this, I’m just saying that people support other things, fashion shows, models…what do I know…flesh sells more than one’s soul.

How does the music scene in La Paz differ from that of Santa Cruz?

I think both are growing at the moment. In La Paz, yes they’re taking risks and trying new things, supporting music, and this makes me very happy. They really support art and alternative music in La Paz, so there’s not too much cumbia or too much reggaetón, for example. However in Santa Cruz there’s also a good music scene so it’s not all that different.

Would you say there was more hardcore in Santa Cruz, or here in La Paz?

It’s in Santa Cruz where I first did hardcore. Hardcore has grown a lot but it has also declined a bit in Santa Cruz; while there are still hardcore bands, a tropical scene has developed in Santa Cruz, for instance there’s been a lot of influence from Brazilian music, pojo and reggaetón.

Apart from hardcore, which aspects of KERUX and Contracultura influence your music today?

Hardcore is a very strong influence in my life, it makes up half of who I am. Reggae and hardcore. These are always my influences as I’m a hardcore roots man, and of course, as they defined the first band that I formed, they had a lot of influence on my music. Now we are creating ‘dread style’, which means a reggae sound from this part of the world, a mix of reggae and hardcore. We want to show the musical world another sound because so many metalcore bands are similar. So creating something new is really important.

The political origins of reggae are Jamaican, do you think that Bolivians can relate to these origins?

Today we live in a time very similar to that of Marley. When Marley was around there was an internal political problem in Jamaica, problems between the two parties that meant they took up arms. This is very similar to here, where people have invented problems between people, they’ve invented a socio-cultural problem between cambas and collas. This problem has grown and people are forgetting that they are brothers in our same country, just with different accents. This accent doesn’t mean that their blood is different, that they no longer have two eyes, a nose, a mouth, fingers…so I believe that in this way Jamaica then is similar to Bolivia today. Is there hope? I believe so. There was in Jamaica then, and I see hope here today.

Does politics influence your music?

I’m not a politician, I’m social but I’m not political. Because in politics you have to be part of one political party or other. And I won’t be part of one, Rasta people can’t be.

Yes because “I and I” is no different from “yo y yo”. “Yo y yo” is a transparent mirror of me and you, however the image the I see in it is of you, it’s as if I were you…if you hurt an unknown person then you are hurting yourself. “Yo y yo” is a biblical idea, it’s to love your brother as yourself. It’s “me and father Jah”. “Yo y yo” is a concept, a way of life, it’s how people should learn to act and live, isn’t it?

Because language is formed by your way of life…

Of course. Rasta as a principle is like writing, culture, it’s applies to and is in everything. Rasta doesn’t just mean that you have dreads…So I keep fighting, and I’m only flesh and bone, I’m sad, but I’m also annoyed and everything, but I try…

In the lyrics of your songs?