MALABARISTAS We meet the street artists of La Paz 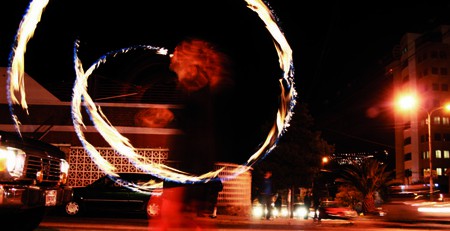 The Malabaristas are not to be found labouring discontentedly behind a substandard bar. No, they ply the traffic lights of La Paz, entertaining the motorists with all sorts of mischievous antics, from juggling knives, balls and dancing with poi (rope with light material attached to either end) to riding unicycles. The traffic light’s sudden switch to red is their ‘curtain up’, their moment to manically dash into the middle of the road like a crowd of bouncy, impudent children. In a flash they have hailed us from atop their unicycle, thrown ten thousand knives into the air (and caught them all), and before we know it are smilingly at the car window, hands outstretched for a monetary reward. An astounding routine, and completed so smoothly it seems all too easy.

We’re lucky enough to meet two of them in the Plaza Avaroa: Carlos, 34, from Columbia, and his girlfriend Michelle, 24, from Austria. Just as Carlos’ broad smile erupts through his thick beard, his curly hair permanently puffs out from beneath his hat. Michelle, meanwhile, sports elegant dreadlocks and three face piercings. As they spend most of their time outside they both wear warm and comfort- able clothes. We invite them to one of the local bars to have a beer and a chat.

Carlos and Michelle met in Venezuela, where they started performing tigether. They’ve performed their way around South America for seven months and now they’re in La Paz, moving on in a few weeks before Michelle returns to Austria in January, where she will continue her studies in agriculture. “My parents don’t know I’m doing this,” she explains, “be- cause they wouldn’t approve.” Carlos, on the other hand, worked as a craftsman before he became a travelling juggler, his profession for the last four years. The balls he uses are made of plastic and are filled with alpiste; they’re quite worn and have been repaired numerous times with duct tape.

“I was nervous the first few times I performed because I wasn’t very experienced,” he tells us. “I didn’t really connect with the audience or have fun with them, which obviously makes it more difficult. Interacting with the audience is very important when it comes to entertainment.” At the start of any performance Michelle feels a little nervous, as she explains: “I never know how people will react when I’m performing my show, which involves dancing with the poi I bought in Austria. On top of that, I’m not from South America so the cultural difference makes me feel a little bit insecure too”.

“We work every day on a different schedule to get money for food and for our accommodation in hostels,” they explain. “On average we earn about 60bs an hour, although the most Carlos has ever earned is 130 Brazilian Reales (about 530bs) in an hour and a half.” The malabaristas are also at constant work to improve their skills. By keeping close contact with other performers they learn which cities are best to perform in, and what new tricks are being tried. We’re curious about where they find the time to rehearse. They tell us that they don’t get to practice much beforehand, but as soon as the light goes red it gives them a rush, like an actor acting out a soliloquy alone on stage. “Everything depends on the red light”, they say, which can last for anything from 20 seconds to 2 minutes. “To perform in a shorter period of time is more preferable”, Carlos explains, “because then the audience doesn’t get bored.”

“The audience here in La Paz is nice,” they continue. “They applaud us and appreciate our art, so it’s easier to earn money here. The people are open-minded and smile much more compared to the audience in Brazil.” The impression these people give is not of starving beggars but wandering adventurers. The hippie-lifestyle suits them: they see the world, pay their way and meet interesting people through their art. Their only responsibility is to pay for their bread and a roof for the night, usually a hostel. “The best thing about being a malabarista?” Carlos ponders, “Meeting people that appreciate us for who we are, and not just as performers.”