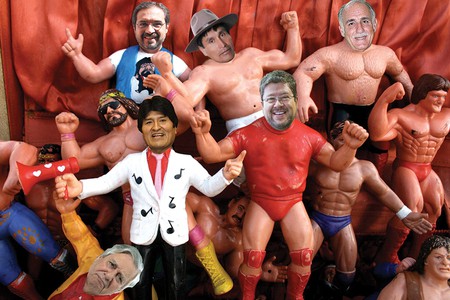 Chauvinistic acts have recently made headlines across Bolivia. This is true across all sectors of society: from insecurity on the streets running to the very highest of political spheres. From sexist rhymes and songs to threats, groping and violent crimes including rape, domestic abuse and femicide, women find themselves at the centre of these attacks, but fewer are prepared to keep quiet any longer.

Being a woman in Bolivia is a challenge. Chauvinism is so deeply ingrained in society that it can be hard for people to even recognize actions and words that imply violence, aggression and deep disdain towards women. Nonetheless, there are more and more women, men and organizations that want to draw attention to this situation.

One recent, prominent case is the murder and rape of Sophia Calvo, a young woman who was allegedly attacked by the security guard of the car park near her office. Beyond high and endemic levels of violence across society, the public has increasingly shifted its attention to the political sphere.

The campaign “Machistas fuera de las listas” - organised by a group of feminists - aims to denounce the multiple acts of sexim, misogyny and sexual violence which arise across the political spectrum. The movement’s goal is to expose and remove all candidates involved in such incidents from the official lists for the upcoming elections.

The issue of sexism and gender-based violence is certainly not new in the political sphere. Last year activists sought justice for a civil servant allegedly raped by ex-assembly member Domingo Alcibia. He was later sentenced to a mere 14 months for inappropriate use of state resources.

Machistas fuera de las listas was finally formed following comments from candidate for senator Ciro Zabala, who insinuated that women should behave themselves and dress appropriately to avoid being raped. Later, Presidential candidate Samuel Doria Medina was criticized after a recording exposed him threatening one of his employees who had been the victim of domestic violence at the hands of her former partner – now an ex-candidate for congress from Medina’s own party. The campaign also went on to protest against President Evo Morales’s sexist comments and jokes in public.

Far from isolated, these events are symptomatic of much larger and worryingly recurring trends.

Most recently a 17-year-old girl was raped and murdered. Two sergeants from the military training school stand accused of the crimes. And so these cases continue in discourse and practice.

All of these instances of violence against women are truly alarming and difficult to ignore. As a result, various demonstrations and protests have arisen in an attempt to put a stop to this pattern of injustice, violence and chauvinism.These events have also triggered a political feeding frenzy, as different parties and groups seek to use candidates’ sexist comments to further their own causes.

Jenny Ybarnegaray, a member of the “Machistas fuera de las listas” movement, states that this campaign reflects the constant, long-term struggle of women.

‘This is a systemic problem that has cultural, social, economical and political roots that aren’t going to be resolved overnight with a campaign. However, at least our initiative has stirred the waters.’

It’s worrying to think that so many sexist and violent acts are taking place in our country and, most of all, that some of those responsible are both political candidates and those who either run the country, or are running for office. However, at the same time, by being in the public eye, these events are generating a widespread feeling of indignation and disgust in society. They are making us open our eyes and be more aware of what is happening in order to take action. They are making us continue to fight for the ability to live in a democracy with respect, equality, and the freedom for citizens to exercise their fundamental rights.