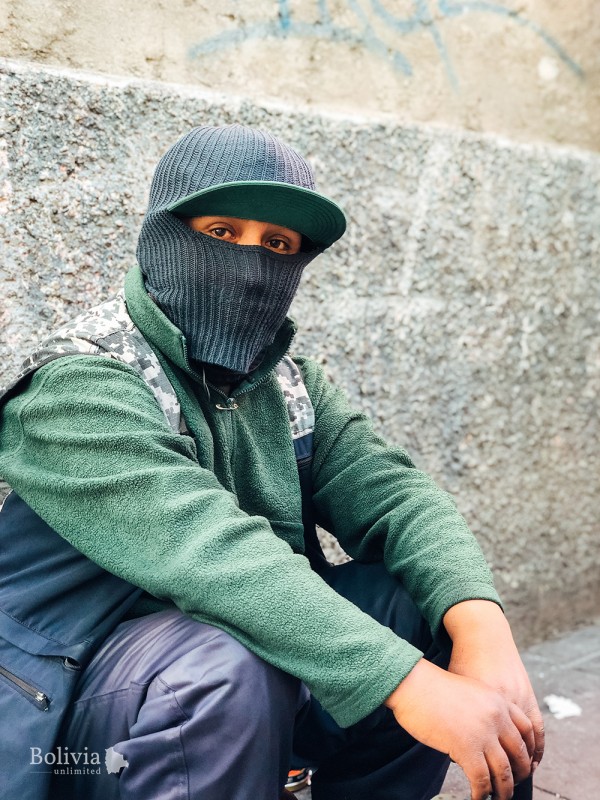 The men behind the masks

Los lustrabotas, or lustras, are a familiar sight around La Paz, offering all passers-by a shoeshine and polish, trainers and sandals included. You will find lustrabotas in every plaza and street corner of the city, but these workers, often young men, are both visible and invisible at the same time. I was swiftly corrected by one gentleman I spoke with: lustrabota is a derogatory term; the correct, dignified name is lustracalzado.

Many lustras, especially the younger ones, wear balaclavas and baseball caps to hide their identities; apart from protection from the city’s cold and the chemicals they work with, lustras wear them to avoid the social stigma and discrimination attached to their profession. Many want to remain anonymous while they work hard to support their families or pay for their studies.

But I wanted to know what the lustrabotas thought. I wanted to hear the unique history behind each pasamontaña. As expected, I was turned away by lots of lustras who didn’t want to talk, but there were many who, when they started talking, wouldn’t stop. This cemented the fact there is a huge difference between lustras and the negative stereotypes they face.

Ramirón has been working as a lustra for more than 22 years, with other jobs on the side. ‘I earn very little,’ he said, ‘only [enough] to keep me going, but it isn’t enough to survive off.’

‘The mask is for different things,’ he added. ‘One is so that people don’t recognise you, as many of us hide [being a lustra] from our families… It is because of the discrimination… If my girlfriend knew I was a lustra, she would never accept me.’ 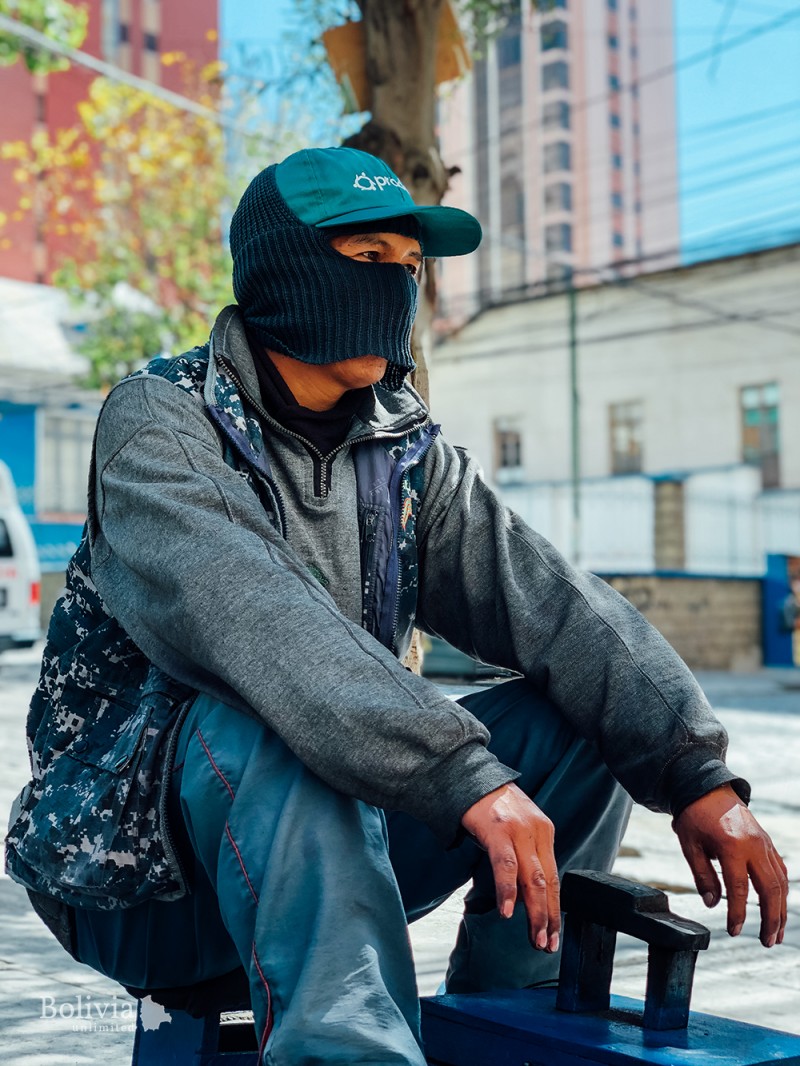 As I interviewed Ilder, he polished the shoes of five customers. Some of them made small talk, but most kept silent, not even asking for the service but simply placing their feet on the shoeshine box, headphones plugged in, staring down at the man squatting uncomfortably below.

One of the customers stated that lustras were very common in La Paz, just another part of life. One customer, smartly dressed in a business suit, added that he gets his shoes shined an average of three times a week at a minimum of two bolivianos a polish.

Ilder seemed happy with his business, offering that he earns ‘a lot – daily I earn 150 bolivianos,’ the equivalent of £17.90/US$20. Originally from the countryside, Ilder moved to La Paz for work. He now lives in El Alto and often travels to the city centre where business is more steady.

He firmly stated that he hadn’t experienced any kind of discrimination and that he wears his mask only to protect himself from the fumes of the shoe polish.

Ramiro was one of the few lustras I spoke to who wasn’t wearing a mask. This said, as soon as I pulled out my camera, a scarf appeared and he quickly covered his face.

We were joined halfway through the interview by his friend Reni, who threw fuel onto the fire. The pair were adamant, venomous even, that lustras who cover their faces are all robbers by night and gave other lustras a bad name. They even suggested that the younger hooded lustras frequently carry knives and hold up shop owners just for sweets. This was obviously a huge generalisation, but it’s easy to see how ingrained the discrimination against lustras is, even from those who are in the profession themselves.

Nevertheless, Ramiro said that discrimination should not exist, saying that ‘at the end of the day I dedicate myself to this job to survive.’

Both Ramiro and Reni said that these supposed crimes committed by lustras are fuelled by poverty. To which Reni added: ‘The police don’t do anything. There are no police around. There is no justice in Bolivia. They think we are all very poor, but we are not. We are not all the same. We are not all robbers.’

Reni ended with the remark that ‘people should work honestly and not rob. If they do, why do they need to wear a mask?’ 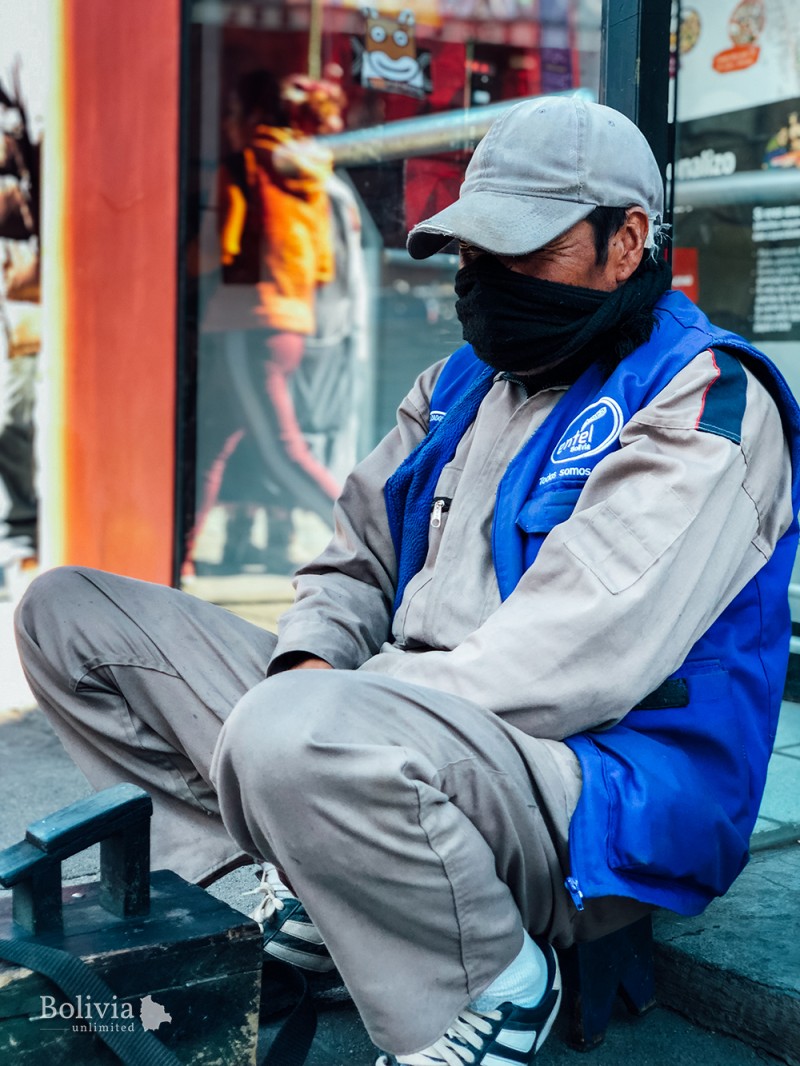 The discrimination against lustras was also evident when speaking with Ignacio, an older man who believed he was an original in the trade. Having not moved from his established spot with a permanent shoe shine chair for over 21 years, he now blames the ‘hooded, mobile lustras’ for stealing his business. He believed that these masked men give the trade a bad reputation, although people still hired them.

He said he had not had a customer for three days and that he often sleeps in his shoe shine chair, as there is no money, no jobs and nobody to help him. 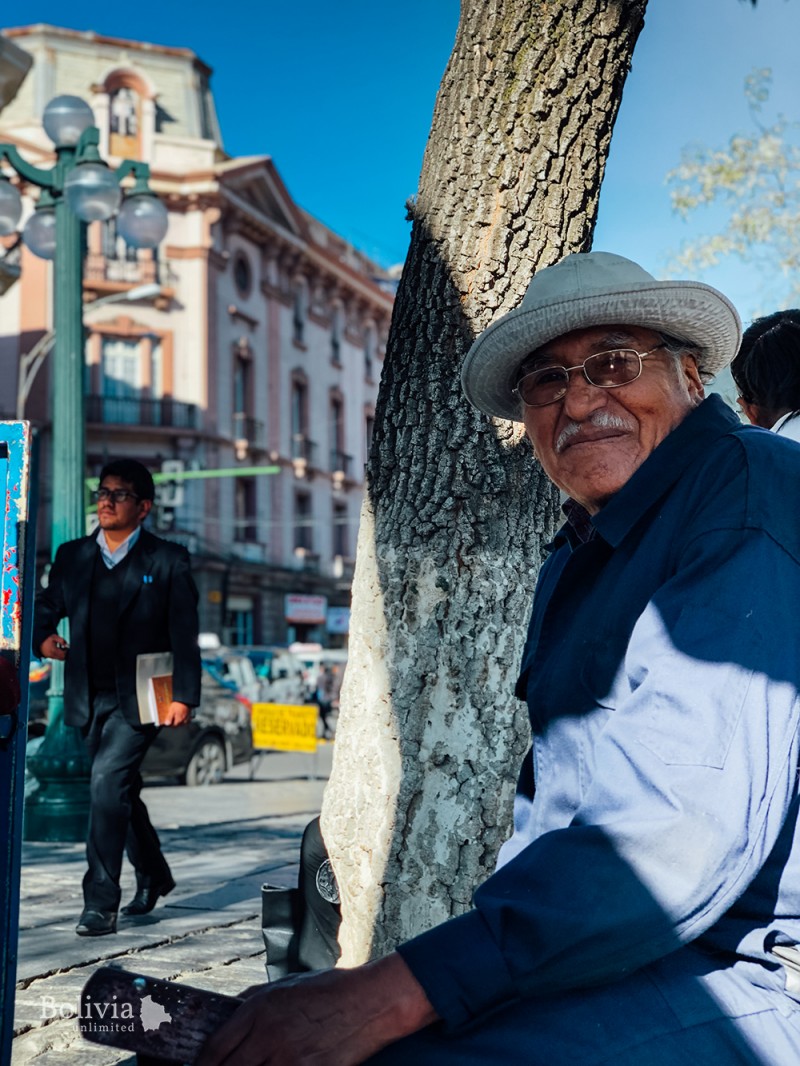 A lack of work drove Nico to this lifestyle. For him, the mask is just for protection against the cold, sun and noxious fumes from the shoe polish. ‘Lots of people don’t understand, they think that wearing a mask is something bad.’

‘A lot of people discriminate against us, as they judge us on how we look… They look down on us, they devalue our jobs…but we are all equals.’

Nico accounted for the discrimination he and other lustras face to a ‘lack of education, discipline and respect.’

He furthered his bleak outlook on humanity by stating that ‘people will do anything to eat, to survive, they don’t feel anything.’

His hopes for the future? It seemed there were very few.

‘This discrimination won’t change in the future,’ he said. ‘I always say, the whole world, humanity, the planet is not ours, it is the gods. Everything is in the hands of the gods. Only the gods can change anything.’

He continued: ‘Nothing will change. People cannot change. No one can change a country. No one. Only the gods, they know everything.’

I asked what the government could do to fight the discrimination he faced. ‘Nothing,’ he quickly responded. ‘The people can’t do anything.’ 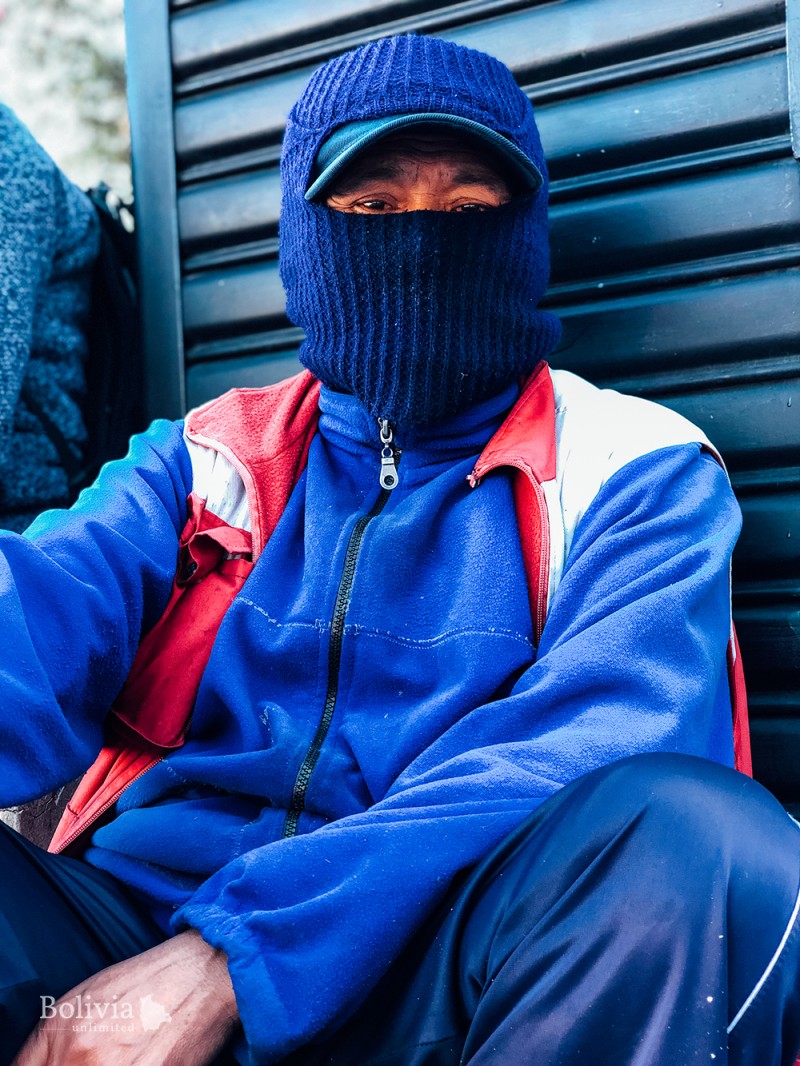 Juan started working as a lustra at age 15. Now, 20 years later, he described how the lack of work in Bolivia meant he had to continue in this profession in order to provide for his family.

For him, the mask and hat are simply protection against the elements and chemicals in the polish. But he too has encountered discrimination. ‘People think we are bad boys, from the street, robbers,’ he said. ‘We are not.’

It appeared that Juan had a loyal clientele. He chatted and laughed with them jovially as he worked. This was a very different feel to the majority of lustras I had spent time with.

Despite his cheerfulness and warmth, Juan’s tone quickly saddened on the mention of his sons. ‘I want my sons to do better than me,’ he said. ‘I do this so they don’t have to.’ 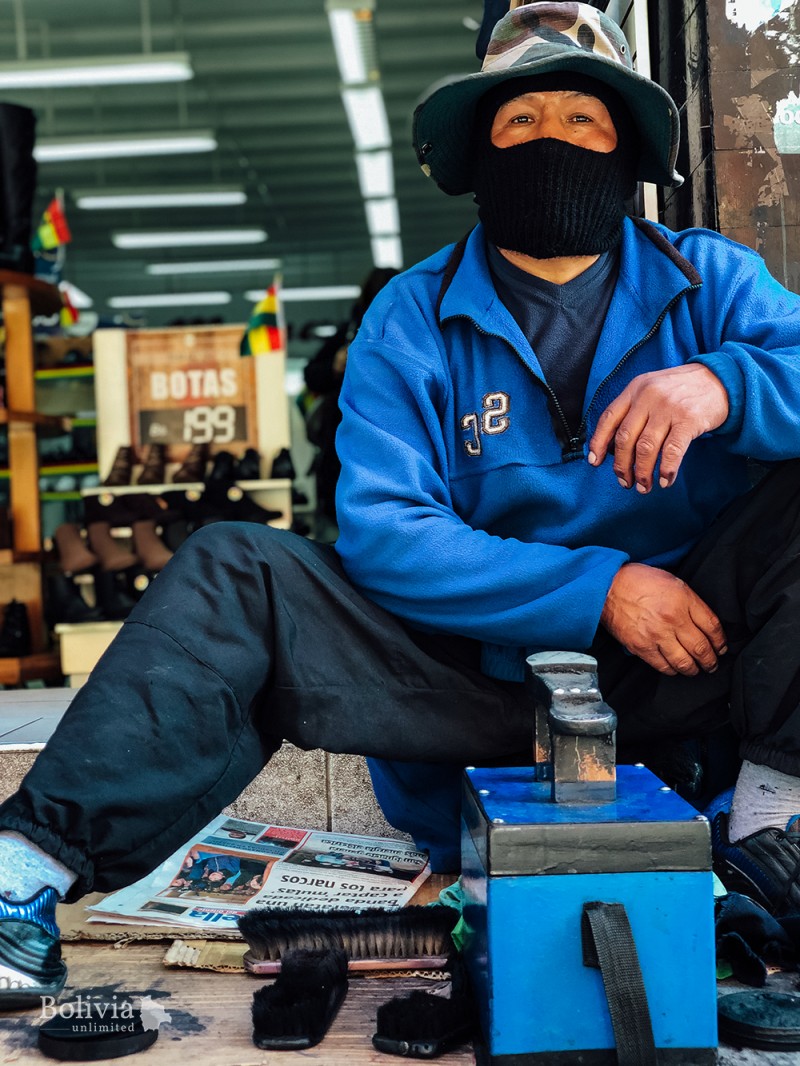 The eldest of four brothers, Ramon said, ‘I work to provide food for my family and my studies. Life is tough.’

Despite his resentment at being a Lustra, Ramon said he hadn’t experienced any discrimination and that the mask, once again, was for protection from the fumes from the polish. He didn’t want to have his photo taken.

‘My family knows what I do, but my friends don’t,’ Ronan said. ‘That’s why I wear the mask.’

Ronan saw working as a lustra only as short-term occupation, saying, ‘I use the money to pay for my studies, and for football. My dream is to be a footballer.’

There are organisations in La Paz actively fighting against the discrimination that marginalises lustras, such as El Hormigón Armado, a local newspaper which highlights the struggles that lustras face and provides career opportunities and educational funding for them. 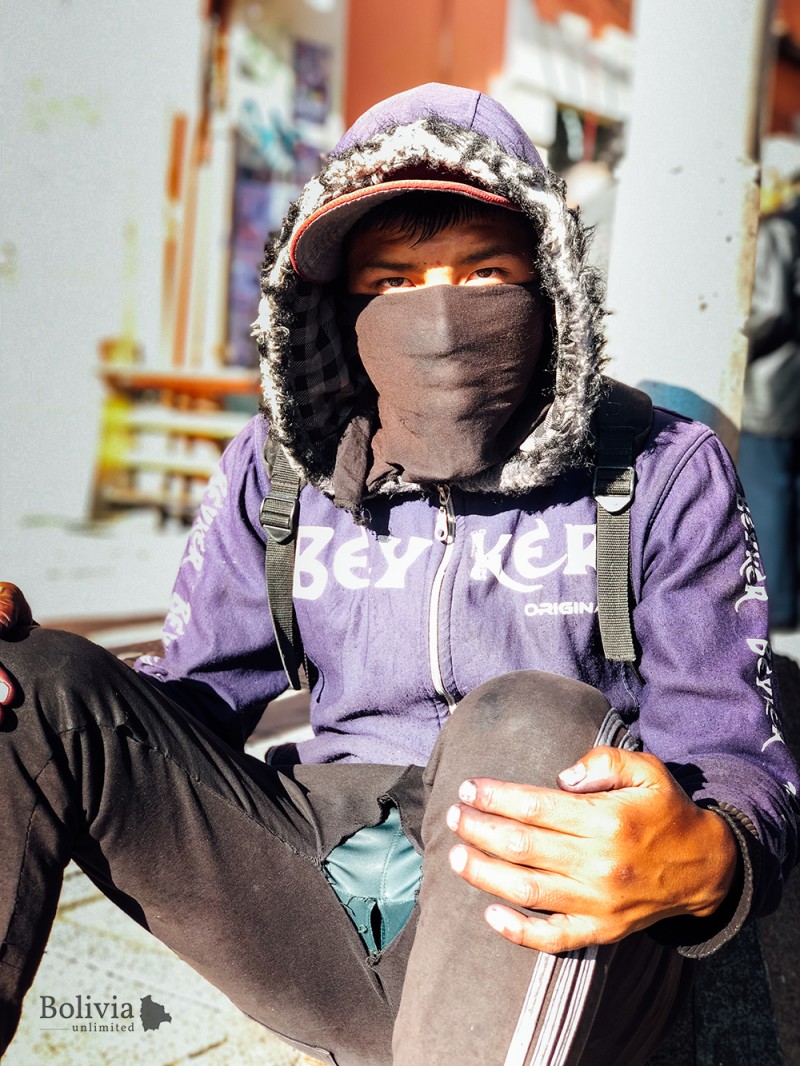 For more information about the lustrabotas of La Paz, visit El Hormigón Armado