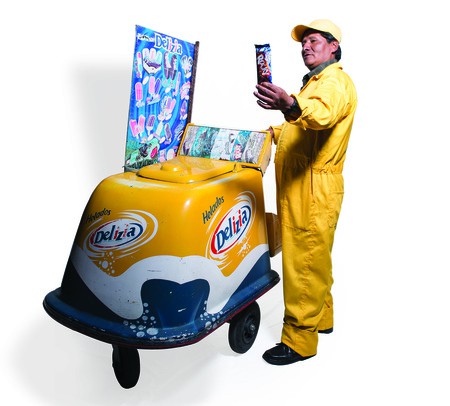 A ubiquitous sight across the plazas and pedestrian walkways of La Paz are the city’s army of ‘heladeros’ (ice-cream men). Mostly male and relatively old, they scrape a living selling ice cream, either homemade or sometimes selling branded products from companies such as Delizia, Frigo, and Panda.

As I approached Alberto, an heladero near the San Francisco Cathedral, I had to wait for several minutes before speaking to him as he had his old battered shoes meticulously polished by one of the city’s many shoe-shine boys—he wasn’t about to start work in shoes he couldn’t see his face in. This summed up the general attitude of the heladeros fairly well.

Most are fiercely proud of the way they’ve managed to eke out a living when all the odds are objectively stacked against them, 'I do this as a last resort when seasonal tourist work dries up. I barely earn enough to feed my family but I’ve never been on the streets and never had to rely on anyone, I always find a way'. If the old shoes represented their tough lives, the polish showed their pride in being always able to 'find a way' and fall on their feet regardless of what is thrown at them.

Another heladero I met outside the cemetery had closed his ice-cream boxes and had started selling umbrellas the second it had started raining. This is the level creativeness and versatility that’s needed to survive in today’s climate. Their role as ice-cream men can’t be seen in a vacuum; they can be seen as a byproduct of a series of socio-economic policies which took place in the country over the past three decades.

Understanding the rise of neoliberalism in the late 1980’s is key to understanding the birth of the heladeros and the evolution of their work. The closing down of key state-owned companies (along with the privatisation and eventual failure of several others) radically altered the situation of hundreds of thousands of Bolivians. Workers who were formerly protected by powerful and highly-organised unions were progressively left abandoned and made redundant. The period produced a situation of extreme ‘labour flexibility’ or precarious work (if we’re to move away from euphemisms) that the heladeros are the products of today. They have neither a fixed salary nor stable working hours, and only earn a percentage of what they manage to sell on the streets; if they don’t sell they don’t eat.

Despite a gradual change in socio-economic policies since Evo Morales came into power, almost all the heladeros were explicit in articulating their sense of betrayal that the current administration has left them with. One Frigo employee told me, 'this government always talks about basing itself on the poor, but nothing has changed for me, there’s still no job security, no real benefits and I still struggle to feed my family. Just like always'.

Looking at the shape of Bolivia’s labour market certainly backs up the sense of frustration shown by the Heladeros. Recent statistics relating to the labour situation of Bolivians is clearly reminiscent of the neoliberal ‘ancien regimes’. A study by Escobar de Pabón estimates that in 2008, 82.9% of workers across the country were in lines of work considered ‘precarious’ with 58.9% of these considered to be in work classed as ‘extremely precarious’. In El Alto the figures are as high as 90.1% and 71.7% respectively.

It is not possible, however, to speak of the heladeros as a uniform group. There are significant differences between them in socioeconomic composition and in relation to their products. While the ice-cream men are generally a precarious group, some, such as the women who sell ‘helados de canela’ (cinnamon slushies) near the General Cemetery in La Paz are self employed and enjoy a more stable and comfortable standard of living. Doña Gladys, a woman I spoke to, had been working fulltime with these products for decades, ever since she helped her mother set up the stall over 30 years ago. Those with a fixed stall typically represent a privileged layer. For many of these heladeros, making ice cream is a family tradition and vocation rather than precarious employment of last resort, like it is for the old men roaming the streets of the city.

Another complicating factor in the work practices of the heladeros are the rivalries that exist among them. For example the ‘independents’ and ‘raspadilleros’ look down on those selling branded lollies, such as those made by Delizia. Rodrigo, who works around the Prado area told me: 'the Delizia and Frigo ones just sell whatever packaged product is given to them. We learn how to make a real cone—and that takes skill'.

Several of the heladeros are organised under a ‘sindicato’ which sets out to act as a labour union and a mechanism of collective representation. This organisation however, hasn’t always been the bulwark needed against struggles that they face in their line of work. The union itself has little history of struggle and victory on behalf of the heladeros. An heladero who works near Perez Velasco called Juan (an ‘independent’) had recently resigned from the union saying 'They’ve never fought or won anything, they charge you a membership but then do nothing, its just a way for some to make extra money, its better to just not be involved and carry on'. This attitude was certainly reflective of a pessimism that was widespread among heladeros about their future.

Alberto, another heladero said 'maybe in the future there’ll be secure work and heladeros will be able to feed their families comfortably, but not in any of our lifetimes, most of us are old and only do this because we can’t manage hard manual work anymore, we won’t live to see these changes. We’ll still get by though'.

These men are certainly characters, they have to be to survive in a period where ‘just getting by’ isn’t an option. They themselves are not so in awe at their ‘ingenuity’ and ‘creativity’ as the readers may be. This isn’t a path they choose and most of them longed for their previous lives as tourist guides or factory workers where they at least had a fixed income and a level of stability. Most hover around the ripe old age of 65 and would prefer to not be working at all. Elsewhere they might be lucky enough to be able to retire and live off a pension.

Towards the end of my research I went to look for heladeros outside a distribution agency (where they pick up their ice cream for the day) near Puente Avaroa. We turned up at 8am —the time they were due— though none of them turned up. An hour later the owner opened up and told us ‘you are wasting your time’. He told us that ‘if it’s an overcast day the heladeros know they won’t be able to sell enough so normally don’t bother turning up, instead they’ll look for day labour jobs or sell something else'. Like the heladero selling umbrellas in the rain, it is clear that these levels of awareness and planning are necessary for these men to get by. Paradoxically, to make it as an heladero often involves not being one all the time.