Looking for a Killa Drink? 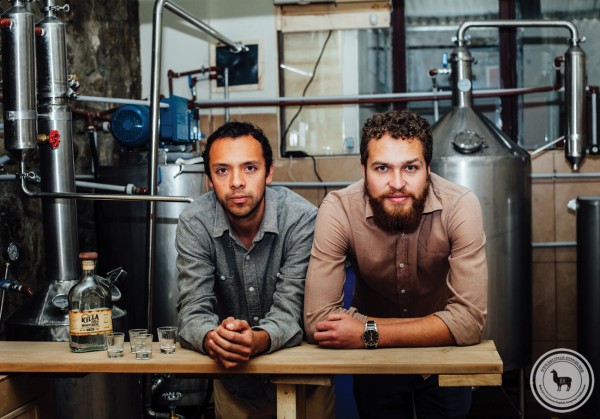 Two Partners Are Looking to Redefine the Whisky Market in Bolivia

Barely five minutes after arriving at Bolivia’s soon-to-be first-ever whisky distillery, I find a shot glass half-full of a clear liquid in my hand. I sip it, and the rich taste flows smoothly – no burn, but a warm glow fills my stomach. This is a 45-abv moonshine distilled from corn, and its name, Killa, is taken from the Quechua word for ‘moon’.

But this is no ordinary moonshine. In Bolivia and Peru, the popular drink chicha is produced by fermenting a certain variant of maize known as jora. Here at the small four-room distillery, the makers start with the traditional chicha fermentation process, but then distill it in order to make it stronger, turning it into moonshine.

This moonshine has a unique taste partly due to the combination of traditional distilling processes with parts of Bolivian and high Andean culture. In order to put a paceño spin on it, the makers have been experimenting with using local grains and processes mixed into the distillation.

According to Fernando Marin, part-owner of the company, this is not the only thing that makes this distillery so unique. Another factor in its originality is the location of the distillery, settled at 3600m in the world’s highest capital. At this altitude, water boils at a much lower temperature, so the process has to be altered slightly for best results. ‘You could take the exact ingredients, the exact equipment, and have the same distillers repeat this process at sea-level, but it would not be the same,’ Fernando says. ‘We have a very unique atmosphere here.’

At this point, the distillery is not yet up and running commercially. Small batches are being tested to refine the production before it is eventually scaled up. Fernando and his business partner, Felipe Gonzales-Quint, are eying quinoa and amaranth, both traditional Andean crops, for use as ingredients. These plants would lend the moonshine flavours distinct from those that the barley used normally in Scotch or Irish whisky gives. Although this recipe is still in development, the distillery has samples of early experiments, which, once unstopped, fill the room with the unmistakably earthy aroma of quinoa.

Located in a colonial building off Calle Sagarnaga in La Paz’s tourist district, the distillery was once a burnt-out shell, but is now coming together as an impressive micro-production plant. Fernando and Felipe reconstructed the original rooms by hand and filled them with all the equipment needed to start their business. Even the distillation tanks, big behemoths made from stainless steel, have been designed by the pair and made to their exact specifications. It has also been a family effort: much of the facility’s furniture was donated by relatives.

Their enthusiasm is apparent in their excitement when they speak about the product.

‘We started exploring the possibility of making whisky five years ago,’ Felipe says. ‘But not in a serious way. We were just curious about where the alcohol comes from. Then we started joking about it, bought some books and did some research. It just grew from there.’

The project is in its infancy, and the pair still have to get certified by the government before they can start production. But they already have ambitious plans for the future. They’re looking to hostel bars and popular tourist restaurants for distribution, and they will be offering tours to interested people, tastings included.

Upon visiting the plant, I was not prepared for the tiny scale of the operation. However, this was more than made up for by the boundless enthusiasm of the two partners. Their enthusiasm is apparent in the immaculate production rooms and their excitement when they speak about the product. But more importantly, their passion is encapsulated in the taste of their chicha-like moonshine, so carefully curated as to renew the vivacity of the drinker, raising her own spirits even as she raises the spirit in a toast to this new endeavour.