Long Road to the Interior 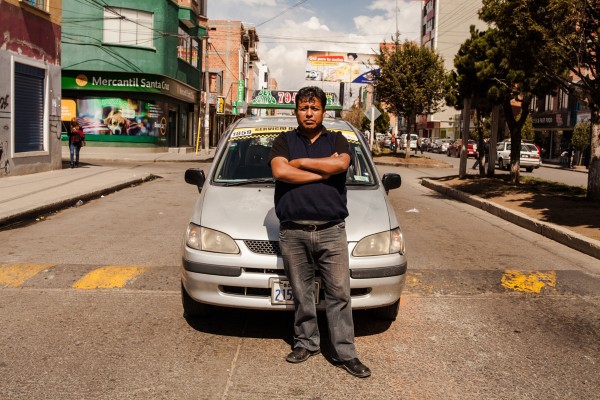 Social issues and Going Out

My Journey with a Taxista through La Paz

‘The secret to driving in Bolivia,’ Edgar says, streetlights illuminating his smile, ‘is thinking ahead.’ At that moment, his eyes catch sight of a family of tourists that foolheartedly takes the initiative to cross a three-lane road. After thirteen years of driving a taxi in La Paz and El Alto, Edgar Ramos Calderon’s steady hands keep the car perfectly straight as we lurch to a stop. Starting again, he chuckles and we crawl further into the heart of La Paz through its primary artery, El Prado, continuing our four-hour exploration of this intricate urban circulatory system.

The road system in La Paz is often without streetlights, street signs or enforced road rules; yet, the vehicles that clog its streets rarely collide with each other. Although their design might appear haphazard, the roads that connect the city's many zonas serve a necessary purpose for its bustling, expanding population: mobility. In a city with intimidating inclines, most find it taxing to get everywhere on foot.

Enter the taxista. Every day, Edgar, an eager conversationalist with tremendous patience and a laugh like home cooked dinner, drives the streets of La Paz ‘for as many hours as necessary.’ Subtly indicating the craftsmanship of professional drivers, he needs no map. He has no GPS to tell him exactly where a client's building might be, and the erratically-numbered addresses don't always help. Instead, he relies on a mental map of the city, built over his many years driving its avenidas, on a career of finding new ways to avoid traffic and get clients where they need to be as fast as possible.

The day before, I had asked Edgar to show me the city and all the ways he can navigate it. For as many hours as necessary. The sun slowly sets behind the tall buildings surrounding Plaza Avaroa as Edgar and I hustle to his taxi. He has parked it in the middle of the road to come fetch me from a café. Traffic dodged, butts in seats. I reach to buckle my seatbelt and notice that he does the same, in a rare instance of disaster-prevention that I hadn't seen a Bolivian driver exhibit until this point. We take off, cascading into the rush hour traffic like water.

First destination: El Cementerio, an epicenter of city traffic and commerce. After a slow climb uphill, we reach the first of La Paz’s many ferias, street markets that sell all manner of goods to the dense concentration of foot traffic surrounding our slow-moving taxi. Suddenly, Edgar makes an impulsive turn to the right, prompting the whistle of a traffic cop. In an instant, all the traffic is gone, and Edgar comments on the grid-like design of these streets: parallel and perpendicular avenidas that can be used to navigate El Centro in any direction. ‘Of course, if you get lost, just go downhill. Eventually you'll reach a plaza,’ he says calmly as children dart in front of the car.

We wind further upward and the air becomes noticeably fresher. More stars are visible. We pass a patch of trees on the left, and Edgar tells me about the monumentitos, gravestone-like sculptures carved slowly over decades by stonemason families. Eventually we reach Pura Pura, the tiny forest that oxygenates the air in the city. From here, La Paz is a smattering of lights and winding streets in the valley below.

After a brief and seemingly frivolous rest stop, we begin our zigzag through Villa Victoria and descend to the center of the city. Along the way, Edgar mentions the madrugada drunkards that dot the streets before dawn. He points at one street and then another, confidently declaring that he doesn't know their names. ‘But I know how to get here,’ he says, guessing he knows about 40% of all the street names in La Paz.

‘It's the clients who have taught me most about these streets,’ he explains, waving his hand toward the expanse of neon that awaits us at the bottom of the hill. In his thirteen years as a taxista, Edgar has driven through the many villas and barrios of La Paz, and has just as many tales to accompany them, including that of a phantom customer who disappeared from his cab one sleepy summer night. ‘Poof! Gone,’ he laughs, snapping his fingers. ‘It was then I knew that I needed a break from seven-day workweeks.’

We hit traffic. The glowing, honking lights we saw from above now surround us as we roll along El Prado, the main artery of transit in the city. When we reach Plaza San Francisco on our way to Zona Sur, Edgar tells me a story about pigeons dirtying his customers' heads. Entering Obrajes, he laments the existence of condominiums and luxury car dealerships. Climbing up to the aptly-named Alto Obrajes, he points out an Olympic-sized swimming pool in the shape of a giant Pringle. From the window of the Edgar’s taxi, I behold the city from a peak opposite of where we began in Sopocachi, as we continue what seems an infinitely wide circle around La Paz.

We hit cobblestone as the music hits my ears. In a small alley, a group of youths dances in unison to folkloric Andean music in front of an ice cream shop. As they practice their performance, a pack of shaggy, tongue-flapping wild dogs scurries around the car. Edgar muses on the respect he has for the city's many feral dogs, who, as he points out, ‘have an instinct to cross at just the right time. They don't hesitate,’ he tells me. And neither does he.

Edgar hangs a left, then a right, then another left, and suddenly we’re back at the neon-lighted bridge we crossed some time before. I try, for a while, to figure out how he managed to avoid the bumper-to-bumper traffic of El Prado that we had squeezed through earlier to humor my curiosity. I attempt my own map of the streets from memory, but I fail before he calmly turns a corner and delivers the cab unto Plaza Avaroa, where our journey began. Dumbfounded, I stare at Edgar’s face, which curls into a cheeky grin. He asks, ‘Where next?’ 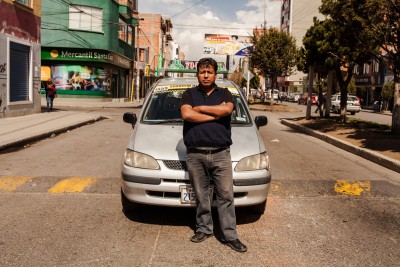 Edgar Ramos Calderon is available for hire for pickups and day trips in and around La Paz and El Alto. To request his services, call 65662889.