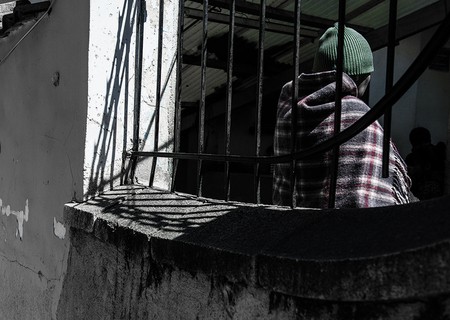 Life Continues Inside the Women’s Prison of Obrajes

Her name in English means ‘hope’—ironic and perhaps understandable, then, that her eyes betray her as lacking in her namesake.

On first impression, it feels more like a village than a jail, save for a watchtower and burnt-orange walls that surround the courtyard. But la cárcel houses 360 women serving up to 30-year sentences for crimes including murder. Petty thieves and drug addicts mingle with violent criminals. Amongst them roam 62 children.

The prison is essentially a functioning community, albeit an atypical one. Inmates here have jobs from cleaning toilets to packing snack boxes with sandwiches for Bolivia’s state-owned airline. There’s a lavandería where garments drip over women kneading soapy piles with bare hands, and a chapel, a kindergarten and several tiendas.

A view from the bleak room we’re ushered into to conduct interviews reveals a ramshackle mélange of metal roofs brightened by sodden clothing in every colour drying in the late-morning sun. One woman dyes the tresses of another a disconcerting lilac hue, wringing excess slosh into a washing-up bowl. Sandals and lopsided toys lie discarded on the walkways separating toldos (small, slum-like spaces where prisoners sleep and spend time), which are the metre-square ‘rooms’ where time is passed when the women aren’t working or studying. This isn’t the type of establishment where inmates are enclosed within four walls every day. Instead, hours are filled in a variety of ways.

‘We have four roll calls per day’, explains grandmother of 10 Patricia Arduz, who has been incarcerated for 13 years for a crime she’d prefer not to tell us about. The 59-year-old has a petite frame and a warm personality, with smile-wrinkled eyes and crucifix jewellery in abundance.
‘I arrived at Obrajes last year, and it’s far better than where I’ve been before’, she explains. ‘Besides the roll call, we choose what to do. You can watch TV, play sports, work or take classes.’

The women in la cárcel have the opportunity to study courses, from English and social etiquette to therapeutic dance and reusing aluminium. ‘I don’t work here, but I make clothes which sell well on the outside’, Patricia says. ‘One item goes for up to 250 bolivianos.’ She smiles proudly as she holds up knitted mittens for us to admire.

Another prisoner, 24-year-old Esperanza Chambi, says that she’ll spend her afternoon partaking in a hairdressing class. ‘I’ve learnt a lot here: sewing, knitting, making clothes. I’m also vice president of the [inmate] population. I look after the other women and they respect me’, she says, with little tangible enthusiasm. Esperanza is six years into a 30-year sentence for murder—the maximum allowed under Bolivian law. Her name in English means ‘hope’—ironic and perhaps understandable, then, that her eyes betray her as lacking in her namesake.

‘It was accidental murder’, Esperanza says, hesitating before describing her crime. ‘I worked in a Chinese restaurant and started fighting with another employee. I pushed her, shouting, “Go away!” But she fell and hit her head. I ran away, but the police found me.’ Esperanza has reluctantly become accustomed to life in jail. ‘I’ve changed since being here’, she admits. ‘I’ve changed the way I think. Maybe outside will be worse. Maybe there is a good reason I’m here now.’ She speaks chillingly, tone hollow and eyes expressionless.

She’s not the only one who is unsure of what life in el mundo exterior might hold.

‘I’m leaving the jail in a couple of weeks’, explains Patricia, fear permeating her voice. ‘It’s not going to be easy after 13 years—there’s everything you need here. I’m afraid because I don’t know what people’s reaction will be. They might hate me. I’m afraid. I’ve been here for a long time.’

Twenty-six-year-old Helen Pereyra, who has two Bolivian parents but a misleadingly fair complexion, served one and a half years in la cárcel. ‘Settling into Obrajes was difficult. The women were unkind, calling me “la leche”, she remembers. ‘I tried to keep a low profile—they threatened to cut my face like they did another fair-skinned woman. In the first week I cried because I was scared and missed my daughter. Then I took sleeping pills that I got from a guard to try and forget.’

Readapting to the real world even after a relatively short sentence was just as challenging, Helen says. ‘It was strange being in the city again—working, traffic, mobile phones. It was like being reborn.’ Since leaving la cárcel, Helen has returned to living with her daughter. She was four when her mother was imprisoned for falsifying government documents with her father, who is now serving three years at San Pedro. ‘I didn’t want my daughter to live with me’, Helen tells us. ‘I decided to be strong for myself, but in prison children learn bad things.’

Sgt. Nancy Villegas, a guard of seven years, agrees, and her concerns are confirmed by the general director of the Obrajes jail. We sit in a high-ceilinged office with an ornate light fixture and a wooden desk. The two women face us, attired in khaki-coloured uniforms and polished boots.
‘My good experiences here are mostly with the children’, Villegas says. ‘I’m always there to protect them. But children suffer. They don’t belong here.’ She is straight faced as she elaborates. ‘Mothers are under pressure, and they take it out on their children. It’s not [physical] violence but psychological; they lose their patience.’

Bolivian law allows infants to live with their parents until the age of six. La cárcel is home to 51 children that fit the criteria, but 11 others, the oldest aged 12, live here too. Sometimes three share a single bed with their mother in a dormitory sleeping up to 40 inmates. ‘We have a team whose obligation it is to provide health care, social work and work in conjunction with other institutions’, prison director Luz Alaja Arequipa explains. ‘But children shouldn’t be here. They have nowhere to play, and when they’re old enough to attend school they face bullying and discrimination.’
Walking around la cárcel, however, I can see that the children here are happy. Rosy-cheeked toddlers sip juice and run around the courtyard. One young girl sits cross-legged on the concrete, feeding spoonfuls of pasta shells to a baby sibling in a cardboard box cot. She giggles and says ‘buenas tardes’. Another plays hide and seek, weaving between toldos draped in flowery sheets and women shielding their faces from the sun with Tupperware lids.

Some argue that the children are better off living with their mothers, no matter how unnatural the environment, given the alternative of being cared for by potentially untrustworthy or distant family members. Esperanza is perhaps proof of this. For the first two years of her time in la cárcel, Esperanza’s daughter, now six, lived with her.

‘When my daughter was here she went to the kindergarten’, Esperanza says. Now, however, she and her eight-year-old brother live with their father in the countryside 12 hours away. ‘They don’t visit often anymore, just once a year in December. I’m here for 30 years, but the worst punishment is that I can’t see my children growing up’, she says, letting her steely-eyed defence down as she sobs, speaking at an increasingly inaudible volume. It’s moving, a true indicator that the women here are more than the criminals that they’re labelled as.

‘When I left Obrajes, employers couldn’t see past my criminal record and old friends didn’t want to know me’, former prisoner Helen tells me over a coffee. ‘People can’t see past the fact that I’ve been in prison. It makes me so angry. But the experience formed a part of my life and that won’t ever change.’

It’s hard to leave Obrajes with an attitude void of positivity. Before the visit comes to an end, grandmother Patricia, who is set to leave within the next few weeks, shows us around her toldo. It’s small, cosy and brightened by slightly wilting yellow flowers in a coffee jar vase. It’s wallpapered with a collage of faces of beautiful women, cut from glossy magazines. Why? ‘I chose this because I like to see the happy, open smiles of women’, Patricia says, beaming and becoming one of them. And that’s the thing that surprises most about la cárcel : whilst there are faults in the system and gaps are fallen through all too often, at the same time, there are happy people here.

‘Sometimes the women are playing and chatting and forget that they’re in prison’, says guard Nancy. ‘That’s the most rewarding thing about my job. I feel more human working here.’