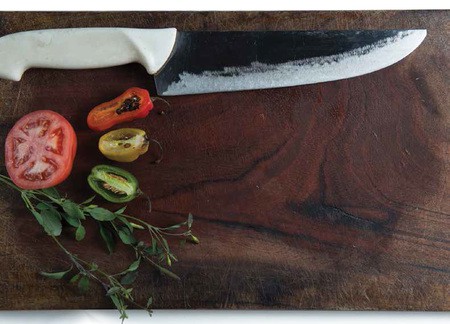 Llajua, the Bolivian hot sauce, is not just popular, but also an essential part of Bolivia’s social fabric. It’s eaten in every corner of Bolivia, transcending cultural and regional divides, from the one-man burger vans of Plaza España and the polished floors of Burger King, to the houses of Bolivian haute cuisine. It originated on the altiplano, although different regions often have slightly different recipes. The addition of a traditional herb called wacataya comes from Sucre, and in Cochabamba some add perejil to the concoction. Its even eaten outside Bolivia, above all in the north of Argentina and parts of Chile, where it’s called pebre instead. In 2009, the Bolivian government went as far as to patent the idea!

For those wanting to make it spicier, use less tomato and increase the proportion of quirquiña and locoto. When done, the llajua is likely to turn out green or a darker red. (The redness is a sign of the proportion of tomato used; generally the redder it is, the less spicy.)