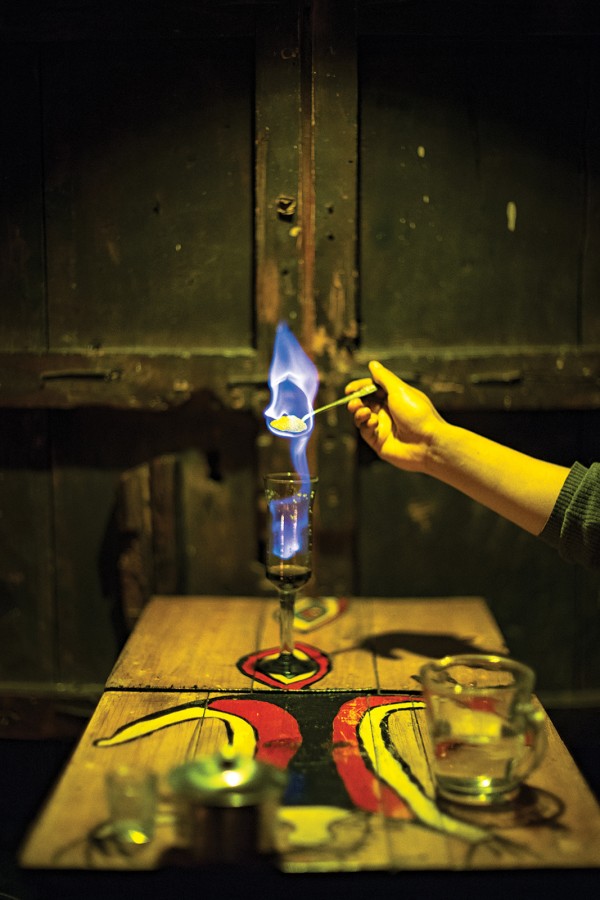 Nestled between museums and artists’ workshops on Calle Jaen, Café ETNO is home to what is arguably the best ajenjo you can drink in La Paz. Customers have been sampling the mysterious green beverage from within ETNO’s dimly lit walls for over 10 years, and some have even recounted strange hallucinations they’ve had around the cafe after drinking. I spoke to ETNO’s co-owner, Yumi Tapia Higa, to separate fact from fiction and learn more about ajenjo’s unique qualities.

Can you tell me a bit about Café ETNO, what you do there, and about your cultural program?
We were the first ajenjo bar in the city, first opening in 2005. We involve numerous artists in the café: Café ETNO has a very strong artistic movement. We ran ‘los Lunes de la Literatura’ [Literature Mondays] for many years. Nowadays, there are various writers from La Paz.

I’ve heard stories about people who’ve drunk ajenjo and then seen ghosts on Calle Jaén. What do you know about this?Concerning ajenjo and stories of certain people who’ve seen things after drinking it, many people have told me that they felt much more lucid. What absinthe does is, more or less, wake up the senses a little bit. Like any other type of alcohol, it makes you drunk, but it also makes you a little more lucid, and awake. This is what various people have told me. Above all, there’s a gnome that plays with the little glasses of ajenjo, moving them around and throwing them onto the floor. We always leave a glass of ajenjo to the duende, so that things go well for us and the café.

Many famous writers and artists have been inspired by this drink. Have there been any famous Bolivians?

I know that Jaime Sáenz, Arturo Borda, and the circle of writers of that era all met up together, and some of them also drank ajenjo.

How do you produce the drink?

At first, we imported ajenjo from Sucre, but then we started experimenting with making the liquor ourselves, and now we make our own. It’s an artisan liquor, with no additives or preservatives. It’s just like the plant.

Does absinthe have medicinal properties?

Traditionally here in Bolivia, it was used medicinally to alleviate stomach aches, and it’s drunk as an infusion of tea to deworm intestines. It’s also really good for digestion.