LIFE LESSONS FOR THE BOYS OF BOLIVIA 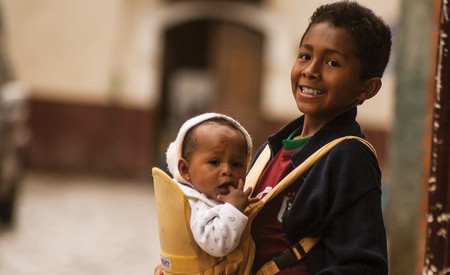 Rethinking How to Be a Man

An hour or so southwest of La Paz lies the town of Viacha, bustling but comfortably so, its maze of brown-faced buildings baking in the midday heat. Corner shops spill onto the pavement; a solitary cow hesitates, then hobbles across the road; a lorry driver abandons his vehicle in search of a cold soda. Yet underlying this flurry of Friday activity, greater, more pressing changes are taking place, specifically across masculine ideologies.

As violence against women continues to be a priority problem across Bolivia, the United Nations Population Fund (UNFPA) has seen its two-year campaign against gender discrimination take off, governed by its guiding principle that ‘All human beings are born free and equal in dignity and rights’. A catalogue of statistics underlines the necessity for a rigorous revaluation of these derechos humanos across Bolivia: Seven out of ten women have suffered a type of violence; out of every ten people physically assaulted, nine are women; and twelve cases of sexual violence are recorded every day, according to information distributed by the UNFPA. Whilst casting this issue as a comparative game of numbers, these statistics go a long way toward assessing the severity of Bolivia’s crisis amongst other South American countries and the necessity for radical change.

Angarita Noguera is director of the Fondo de Población in Bolivia. Running a workshop series aimed at boys, Noguera and her team have encouraged a widespread understanding of violence against women and of the roles we can all play in its prevention. The program has targeted twelve municipalities, each with varying degrees of success. ‘It is a long process that has been different across all municipalities, but we have seen advances in all of them’, says Noguera. Working with central municipal governments is key to this initiative, she explains: ‘Workshops have been tailored to specific communities, and the UNFPA have worked hard to institutionalise the agenda in each as to make a wider impact’. And whilst the ‘adults’ financially run the show, the boys involved play the actors. ‘It is the young people themselves who are in charge’, says Noguera. ‘They are in the position to reevaluate ideas of gender and inspire local governments to make financial compromises to maintain the scheme’. Word of mouth, in it loosest sense, will secure a future for this program, with or without UNFPA support.

Recent acknowledgement of the scope of this problem on the part of the government and international organizations is clear in the municipality of Viacha. Shelters now support victims of violence, and comprehensive legal services have expanded to offer survivor counselling and psychological services here, as well as in many remote municipalities. But the UNFPA’s wider approach is to prevent violence before its onset. Navigating through its centre, I reach the municipal office of government official Shirley Davalos, who speaks of the success of her six-month workshop series in Viacha and the educational methods used; ‘It is interactive, but mainly it has a youth-to-youth transmission policy’. Once schoolboys themselves, twenty-five young men now make up the Youth and Adolescence Municipal Council in Viacha, a committee that runs workshops focused on exchanging ideas and rethinking identity and, in doing so, creating a dynamic learning experience for the 3,000 young attendees.

Davalos insists that whilst the scheme’s focus is the prevention of violence, the program approaches the issue through the lense of universal human rights. ‘We do not believe in focusing on violence directly; rather, it is better from the other side, in the rescue and reevaluation of our rights’. In striving towards prevention rather than enforcement, rights over rule, Davalos and her extensive team work to a much wider audience willing to understand their own rights as men and those of the women around them. As Davalos herself believes, ‘When you know your rights, you can prevent violence’.

Whilst success in this instance is hard to gage, Davalos has confidence in the scheme’s transformative effects on the local community. Schools, especially those in rural Viacha, have seen both a greater enrolment of young girls and considerably fewer dropouts, and male attendance at the workshops has been impressive. There is a buoyancy amongst the young here, Davalos explains—the girls take pride in their education and the boys facilitate this new confidence. Noguera too has been impressed by the workshops’ uptake in Viacha. ‘You talk to those participating in the program and they tell you about changes in behaviour’, Noguera says, ‘the importance of having an informed idea about violence against women’. If, as the mayor of Camargo, Marco Antonio Barco, suggests, the municipalities must ‘invest to protect’, it is the boys of Bolivia, their ambitions and social understanding, that ultimately will inspire incremental change for female victims of violence.

Yet whilst attendance of the boy’s program has been strong, gaining funds for a similar series for girls has put a halt on proceedings. ‘As an organization of the UN, it’s not in our interest to support the program forever’, says Noguera. ‘Securing new initiative for girls is certainly a priority, but we don’t as yet know what the plan is going to be’. Waning financial support from the Fondo de Población alongside a tight municipal budget have rattled plans for a new anti-violence scheme for girls that was to have been launched this year. Davalos, however, is undeterred. A new strategy will train 600 parents of former participants to lead workshops themselves and subsequently keep this valuable program alive, even on a limited budget. ‘It’s a much more sustainable method,’ Davalos explains, describing ambitious plans to reach beyond schools to universities and youth groups. Sustainability of the scheme throughout these municipalities is precisely what the UNFPA hope to achieve.’By 2016’, says Noguera, ‘the local governments will have been able to implement these workshops on a permanent basis, supported by participants, parents, schools and communities alike’.