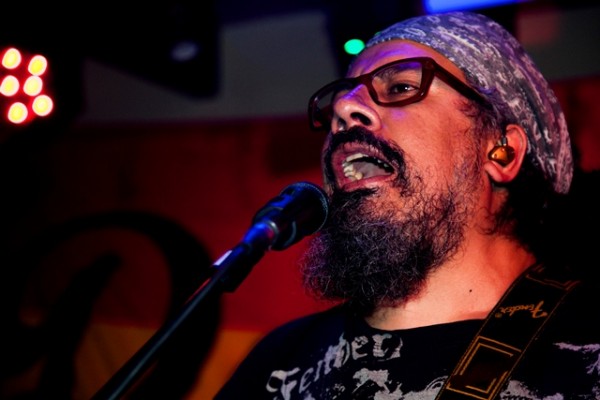 New beginnings after the break-up

The adage, ‘It’s never too late to try new things’ is often one reserved for parkour pensioners or grandmothers getting to grips with what they call ‘The Facebook’. When I meet Panchi Maldonado, however, whose iconic band Atajo is embarking on what seems to me a sort of trial separation from the end of April, I find a man who defines the philosophy. Over a lukewarm Paceña, I sit down with Panchi, a couple of hours before the band’s gig at Roots Reggae House, to talk past, present, and future. Smuggling sporadic sips between his long, poetic soliloquies, Panchi tells me how his relentless quest for self-improvement and revolution will, he hopes, take his next chapter to new, ‘more radical’, fresh pastures.

Fittingly for a man who tells me, ‘I learnt that rock has never been a style of music; rock is a way of life’, Panchi’s image is iconic. Stocky, with long dreadlocks, a shaggy grey-tinged beard and that trademark bandana, his sharp eyes pierce through a pair of magenta-rimmed glasses that look like they’ve been pinched from the crown of an optometrist’s secretary. It seems to me that there is a certain sense of irony in the name ‘Atajo’. In English, it means ‘shortcut’, but Panchi does not strike me as a man for the path of least resistance.

His father was a frustrated musician, he tells me. Music was his childhood, music was his home, music is in his blood. He formed Atajo back in 1996 with the intention of ‘exchanging experiences, interests, and ideals’, after a foray into blues had proved unsatisfactorily one-dimensional. In the past 20 years, the band has released nine albums, found success abroad as well as in their own country, and has even succeeded in paving its own genre in Bolivia – ‘urban rock’ – through a central desire to ‘reflect social reality’.

One thing that marks Atajo out from its contemporaries is that, in essence, it comprises a fusion of individuals from distinct musical backgrounds who come together to innovate, combine knowledge and abilities, and create new sounds. They cite as their influences, amongst others, ‘reggae, blues, saya afroboliviana, folk, ska, huayno, morenada, festejo, and rock’. Panchi posits, ‘Why not have a band where you can play all types of music, without limiting yourself to a genre?’ This is a challenging feat, no doubt, but Atajo’s reluctance to be pigeon-holed has created a unique and eclectic archive of songs.

When I ask Panchi whether he has any regrets from his time at Atajo’s helm, he cites just one: ‘I only wish that we had been a little more radical in experimenting with more types of music. It is for this reason that we are separating. I want to link up with people from other countries, other cultures; to have perhaps a drummer from Senegal, a violinist from Russia, a singer from Syria. Those elements are going to change my music. So, I leave to experiment.’

While striving to embrace and incorporate such a range of sounds and genres is a trait that defines Atajo, the band maintains a strong sense of ‘Bolivianness’. They struggled at first to enter the mainstream consciousness because tastes had emigrated to Europe and the USA, and listening to English-language songs and Western covers was the ‘96 modus operandi for rock fans in Bolivia.

The stories, the struggle, the subjects of Atajo’s songs are grounded in Bolivian reality. ‘Nobody listened at first,’ Panchi explains. ‘Many people criticised us because we had very controversial and critical lyrics at the time – we emerged at a difficult political time in Bolivia.’ 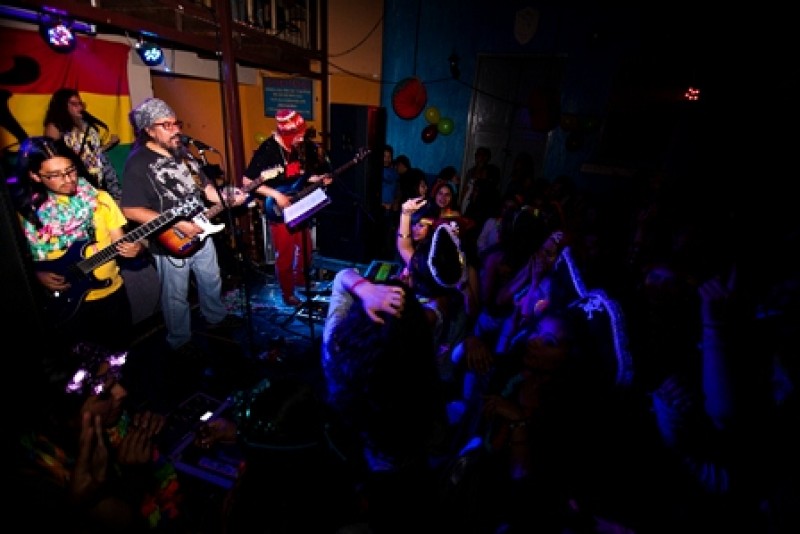 Atajo’s first album, Personajes Paceños (1998), or ‘Characters of La Paz’, is indicative of Panchi’s philosophy. ‘For me it is important to speak to the hearts of the people, to touch their souls, and fire up their minds,’ he says, with a fluency suggesting that this is a well-rehearsed tagline. Throughout Atajo’s career, the band has achieved this by telling real, relatable stories.

For Panchi, one song in particular stands out from this, his favourite, album. ‘I wrote a song that talks about the journey from El Alto to La Paz by minibus,’ he recalls. ‘Once I was doing this journey myself, and that same song came on the radio. The driver said, “Jefe, are you listening to these lyrics?” This was the greatest gift of the album: I realised that the people were identifying with our music, which is all I wanted, that people were listening because they understood it.’

It strikes me in my YouTube wanderings that politics are central to Atajo. At Roots, when the band starts banging out hits like ‘Pulga Presidente’, ‘Nunca Más’, and ‘Que la DEA no me vea’, the crowd seems to enter some sort of trance, breaking out from their dancing circles to join the battle cry in unerring unison. The notorious line ‘Gringo, go home!’ speaks to me on a personal level as I check my watch and realise that the time has raced to 4 am.

I ask Panchi whether, as an artist, he feels responsible for speaking out when he sees something he disagrees with. ‘I don’t want to fall into the cliché of the artist being “the voice of the people,”’ he explains speculatively. ‘I think that all human beings are responsible for telling their stories and as a musician I am lucky that I can do it through song so that message can reach more people. But it’s important to note that you cannot stay quiet if you see destruction and devastation in the streets, if people are killing each other, if there is injustice around you. You cannot stay silent.’ With each strand of thought, the passion behind those spectacles intensifies.

We can, suggests Panchi, safely assume that this is not the end for Atajo. The split, he stresses, is not a disharmonious one – far from it. It seems as though Panchi is sending out each of his knights to search for their musical Holy Grail. ‘I want each member of the band to experiment in their own lives to see what each of them finds,’ he says. Atajo will be back, he hints, stronger, better and more radical than ever. When I ask Panchi whether he personally has any long-term plans to retire, he swats me away out of hand: ‘I could never retire. Music is my life. Without it, I would die.’

As we come to the end of our shared Paceña, Panchi leans forward in his seat as if to deliver a closing statement to his mourning fans: ‘I only want to say, “Listen to Atajo”. I know that lots of people have listened to the hits, but listen to the albums from first song to last, and find out what it is that we have wanted to be for the last 20 years. You are going to find many surprises. We may have decided to split for now, but the music is still there. It is never going to die.’