Life As A Trout 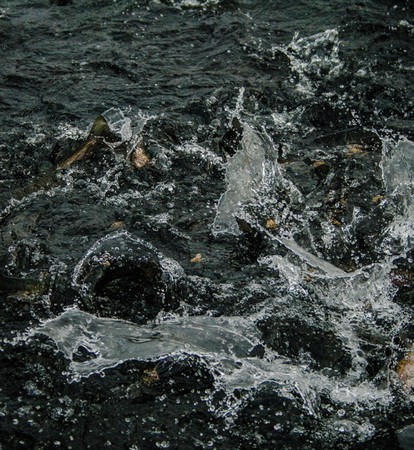 My late Grandfather, George Howe, was a keen fisherman. He dedicated his weekends to sitting in whatever English weather came his way to provide my family and I with Saturday-night trout. He kept a small pond in his garden to make his retired life pleasurable, despite the hungry heron prowling the skies of Northumberland. I looked forward to his secret recipe, trout paté, every Christmas, which was kept in a navy blue marble pot, and is something my family now misses at the dinner table.

Whenever he wasn’t fishing, he spent his time tending to his vegetable crops. As a little girl, he reminded me of Mr McGregor (the gardener from the Peter Rabbit stories), with his watchful eye and the help of a scarecrow, we were always too scared to slip into the soil. I vividly remember the giant goldfish he kept in the pond, and how we used to feed them over the bridge and watch them disappear under us.

Some years later, I find myself on a bicycle in the dizzying heights of Lake Titicaca, with a standard journalist's notepad in my pocket. I hate bikes, especially when they don't have competent brakes and a cushioned seat. But it was a cheap way of seeing the shoreline and accessing the lake's islas flotantes , not to mention a great opportunity for getting a forearm tan.

I meet my first fisherman on the floating island of Kalakota, who welcomes me donning a hat and a thick woolly jumper, an attire seemingly impossible to wear for the radiant heat of the Andean sun. His name is Germaín Kengua Quispe, and he guides me along a wobbly walkway to show me his trout stock and explain how they cater for tourists. Drifting alongside the island is a plush lancha , used to bring tourists from Copacabana, to try the freshest trout money can buy.

Tourism is the island's main source of income, but it is the trout that gets the 'gringos' hooked. At a price of $10,000, keeping the island afloat is no cheap business. The polyester blocks that hold up the wooden floorboards, draped in totora reeds, need cutting and replacing regularly. Adding to that is the constant attendance to the trout’s every need. ‘We need a project’, Quispe says, ‘to help fund the floating islands, it is a huge sacrifice for us’. 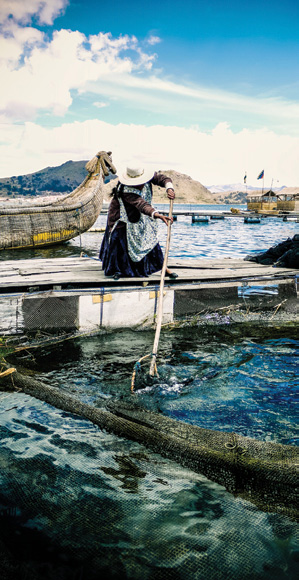 In the wild, trouts get their pink colouring from prey, such as shrimp and crayfish. But in trout farms, however, they need to use colouring in the fish feed to imitate this natural effect, which they must import from Peru.

Over the next hill, lies the village of Chañi, hidden in a secret cove. As I descended from my bike at this new location, I meet a young couple: Oscar Condori Mamani and his lovely wife, who are very knowledgeable on the topic and quickly begin to explain what life as a trout truly means.

‘The trouts here are for national and international tourism, we don't sell to export, only for consumption’. Here the trout is sold for 30 Bolivianos per kilo and it comes as fresh as it gets; you get the chance to watch your food be caught, gutted and fried, straight onto the plate within five minutes. Bolivia's fast food at its finest.

Chañi has three types of trout, creating colourful circles as they parade in the nets. There are arcoiris, dorada and amarilla, split into their appropriately sized nets of small (2 months old), medium (7-8 months old) and large (up to 3 years old). The biggest fish boast patterned flesh and are around 3 years old, weighing up to 5 kilos each. ‘Más grande, más rico’ Oscar tells me. But these larger fish are mainly used as productores to create other juicy trout that will be eaten by hungry tourists, when they are between 2-8 months.

The productores get together once a year between the months of May to July to spawn their eggs, which are then taken straight to a river one to two hours away from the Lake. The prime waters for these huevitos are aguas vertientes , where these babies are born, only to return after a few weeks to the closed nets, or criaderos of Lake Titicaca. After 2 months, they are upgraded to the open nets of the islas flotantes , where they swim in the open air, waiting to be scooped up and fried in a pool of hot oil.

It’s not hard to spot the abundance of wooden square nets bobbing on the waters of Lake Titicaca. These are criaderos, where copious amounts of trout are kept. To my disappointment, the only fishing to be done here involves rowing to the nets and collecting the trapped trout.

My initial expectations involved putting on my yellow overalls and wellies to join these fishermen out in the depths, battling the storm and chaotic waves. But, being in Titicaca, one of the highest lakes in the world, sitting at 3,811 metres above sea level, the calm water reaches the horizon and the only waves in sight appear when a motor boat glides past. Maybe I’ve been watching too many ‘Deadliest Catch’ TV shows...

At first I imagined that I would be able to join the Titicaca fishermen out on an early catch and encounter the excitement of reeling in a monstrous fish, as my Grandfather once did. When talking to the trout farmers of the Lake, I soon realised I had confused sport fishing with the practicalities of running a fish business.

Grandpa Howe was a traditional trout man, who searched for Rainbow Trout and Wild Brown Trout with a fly, rod and line. He wore a checked shirt with a sweater vest, always in a shade of green, and drenched in an outdoor odour. For my Grandfather, he loved the thrill of casting the line and pulling in that record 2 kilogram fish. He would always have a story about the ‘one that got away’ but for the fishermen at Lake Titicaca, survival is the biggest accomplishment.