Lessons from the caves 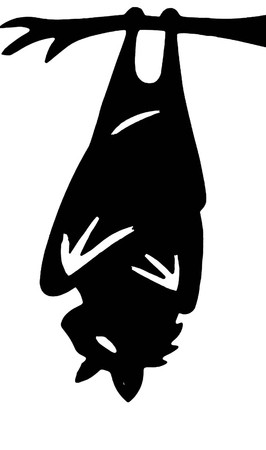 Yoko Corzon gets close to our winged mammalian relatives to discover they are not as dangerous, evil, or ugly as some make them out to be.

It’s 4:00 am, I’m sitting on a cold rock outside of the San Pedro cave huddled against 3 other sleepy and shivering volunteers of the PCMB (Program for the Conservation of Bolivian Bats). Our radio transmitter suddenly goes—beep, long pause, beep, long pause, and then the beeps start occurring at shorter intervals. We shake off the cold and sleepiness, get up and search for the signal until we hear—beep beepbeepbeep. A bat soars above our heads, we turn off the radio transmitter and head toward our bat trap. Raquel Galeón, checks the trap, she smiles; the bat with the radio collar is inside. She carefully removes it out of the bag and it shows us its long and slender tongue. It’s a nectarivorous bat, Anoura geoffroyi, and its snout is covered with yellow pollen.

Neither Ugly nor Blind
Generally people perceive bats as evil, blind, ugly, dangerous, blood-drinking flying mice (thanks, Dracula). Blood-drinking bat species do exist, but most people don’t know that nectar-drinking bat species outnumber them, that they are pollinators like bees, and are important to keep the forests alive and healthy. As for the ugly part, most bats are actually really cute, tiny with soft fur and beautiful black beady eyes. Down the evolutionary line, bats are closer to humans than to mice. However they have gone through an amazing adaptation process which enables them to fly (the only mammals to do so) and use an ultrasonic echolocation system to get around, even though their eyesight isn’t that terrible.

Bats make up the second most diverse group of mammals. In Bolivia, there are currently 133
recorded species, all of them of great importance to the ecosystem, and many of them extremely beneficial to humans. A medium-sized colony of insect-eating bats can do away with 25 tons of insects in one year. That’s 25 fewer tons of bugs such as mosquitoes (dengue, malaria) and moths (crop pests), with no need of pesticides. And if Tequila is a favorite of yours, thank the lesser long nosed bat, who for thousands of years has pollinated Agave plants, helping it thrive in Mexico’s deserts. Bats are also known to pollinate wild varieties of mango, banana, cocoa, balsa wood and guava (as part of their repertoire of more than 500 plant species). Fruit-eating bats are essential for the seed dispersion of many forest plants, dropping tiny (yet potent) seed and guano bombs as they fly away from their food source. These seed bombs have been found to be of great importance for the recovery of fragmented forests. Carnivorous bats help keep fish, toad, and other small animal populations in check. Similarly vampire bats, although not lethal, can be seen as a population control mechanism. Two of the three species drink bird blood, and the third, Desmodus rotundus, drinks mammal blood.

Back in San Pedro, it’s now noon. From inside our cabin we can hear kids shouting, people laughing, cars passing by, music thumping, and dogs barking. The tourists have arrived to visit the famous San Pedro Cave. We head out, there’s a line of people going up the trail to the entrance. As we walk past them, we see candy wrappers, soda bottles, leftover food, plastic plates and cups strewn on the floor. Outside the entrance, painted on a small wall, some simple rules: no littering, no shouting, no getting into the water (there is a small lake inside the cave). We duck at the mouth of the cave and walk inside, we don’t need lanterns as the sun’s light still reaches us. Before it dies out, lights from the inside guide our path.

In the past few years, this cave, known for the bats that inhabit it, has been improved with lights, steps, a wider entrance, and small boats. The several colonies of bats living here have had to adapt to this ‘progress’ and the influx of tourists. This adaptation process has resulted in their numbers dwindling. The improved access to the cave also brings with it an increase in ‘bat hunters’. When a woman learned we worked with bats she asked if we could grab one for her, offering to pay us. She wasn’t the only person we met hoping to catch a bat. Bat blood is sought for its ‘curative’ powers in the treatment of epilepsy. Dead bats are also used in traditional black magic or for school projects, and live bats are forced to smoke as a lucky ritual, causing their lungs to explode. On the other hand, we also met people hoping never to come across a bat, ‘they say bats get tangled in your hair and then bite you’, a girl told us in a squeaky, scared voice.

Why so scared?
The threats bats face are often a consequence of fear and the widespread perception of them being ‘evil’. A few months ago, while asking around for bat roosts as part of an ongoing project to survey the species in the Valley of La Paz, a Mecapaca local explained to bat researchers Oswaldo Palabral and Adalid Alfaro how his community decided to burn a cave where bats were known to roost. To the locals who own cattle, donkeys and other livestock, such a move is seen as a way of protecting their animals so they can continue supplying the cities with milk, vegetables, and meat. But the reality is that they displaced several different species of bats, not only the targeted vampire bat. Setting caves on fire, blocking the entrances, spraying different types of chemicals, and poisoning, are some of the different methods used by people to get rid of them. With other animals, they are also vulnerable to the threats posed by urbanisation and deforestation.

The extent to which vampire bats threaten livestock (or the corresponding economic damage they are responsible for) is undetermined. Even so, most farmers and cattle owners don’t hesitate in killing any bat they find. The widespread idea that bats transmit rabies is probably the biggest reason for this intolerance. Studies show that the percentage of bats infected with rabies is actually low (an unpublished study by PCMB’s Isabel Moya in a Potosí community that complained about vampire bats found 0 rabid specimens), and researchers have found that rabies and other diseases are much more likely to show up in a stressed colony (i.e. a colony displaced by fire or urbanisation). So it would seem that the intolerance towards bats is actually a consequence of how little people know about them.

However frightened people are, through my experience in the PCMB I have witnessed how their attitudes can change. After learning about bats, kids end up fascinated by them, adults want more information, and farmers and cattle owners open up to different possibilities of dealing with bats. Some other people were never frightened to begin with, and others like the Tsimane hold them with appreciation in their tradition.

They say long ago, the men went out to hunt at night and women stayed in their village. The hunters came back at dawn amazed to find plentiful baskets of fruit. In their absence they learned that young flying men brought these baskets for the women, and stayed with them all night.

There are more than 1200 bat species living across the world, in such unimaginable places as Alaska or the Bolivian altiplano—in caves, roofs, under bridges or leaf tents they build themselves. Be it a physicist trying to understand echolocation, a biologist researching communication, or a family bothered by mosquitoes, bats still have much to teach us.