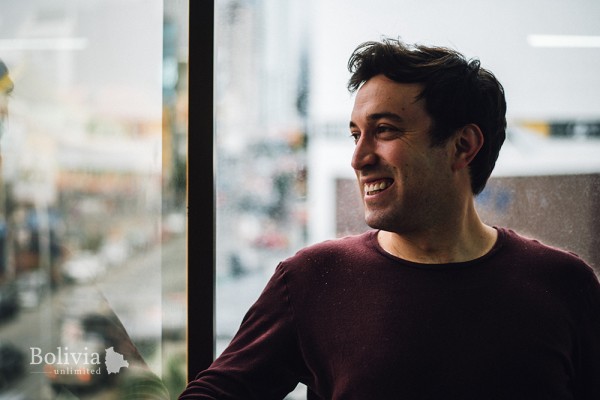 If you live in La Paz, chances are you’ve walked past a picture of Leonel Fransezze on a billboard advertising mentisan or sunglasses, or maybe you’ve seen him on TV as a presenter on ATB, or in the newspapers’ society section. His ubiquitous presence is hardly surprising once you’ve met the man. His energy, charisma and insatiable ambition make him one of the most notable people of his generation.

Born in Buenos Aires in 1985, he grew up in La Paz before leaving to study theatre in Argentina at 18, coming back to Bolivia in 2013. His last five years have been prolific, to say the least. His first vocation is in the theatre. His roles have included Dracula and Javert from Les Misérables, but his ambition extends much further. His goal is to ‘make Bolivia and Bolivia’s talents known in the world.’

To do this he started the company Macondo Art with Claudia Gaensel in 2014. It’s a multidisciplinary enterprise that dabbles in theatre, audiovisual arts and event organising. The company’s goal is to promote Bolivian arts, producing quality shows and raising the standards of the creative arts in Bolivia. In the last four years, Fransezze says, ‘We have more than tripled the public of the municipal theatre in La Paz…We have increased the level of quality of national shows.’

Fransezze is now working on another project: a Bolivian TV miniseries, La Entrega. According to him, it took 16 weeks of filming, one of the longest shooting projects in Bolivia, and will comprise 10 episodes. La Entrega tells the story of human trafficking in Bolivia, and, says Fransezze, ‘It doesn’t have anything to envy from foreign productions.’ Fransezze is aiming to sell it to international networks like Fox and HBO, but, in any case, he says, ‘I can assure you it will come out internationally.’ He also has a movie in works for later this year, about which he can’t say much.

When talking to Fransezze and seeing the determination in his eyes, it’s clear that he’s achieved all of this through raw effort and perseverance. His motto, he reveals, is that ‘When people tell me I can’t do it, it means that I will be able to do it.’ ‘You have to go ahead without expecting someone to push you,’ he says. Making mistakes and failing aren’t to be feared, as ‘failing is the only way to grow.’

I ask how Fransezze overcomes all the challenges on his way to achieve his many artistic visions. The answer is simple: ‘With perseverance. With failures and perseverance. You have to remove these mental paradigms: There are walls, barriers against success – we put them up ourselves.’ One of the main obstacles he aims to overcome is changing the default setting for Bolivian mentalities. ‘One thing is to change the mind-set, remove the chip that says that because we are Bolivians and it’s a small country we can’t do great things. We’ve all said something like “This is good…for Bolivia.” We’ve all said it, and there’s nothing more mediocre than saying this. When we ourselves put up this barrier – “Bolivia low-quality” – we’re lowering our ceiling so we can’t stand up. We have to stop talking like mediocrities, and we have to start talking like winners.’

And there’s also been personal fights that Fransezze has had to overcome. Because he wasn’t born in Bolivia, people who want to attack him use this as an excuse to deride him. This was hurtful at first but not anymore, as it’s pretty clear for Fransezze who he is and where he belongs: ‘I am en mi tierra. I lived in Bolivia since I was six years old. I am Bolivian according to the law and in my heart. In Argentina they called me bolita, I’ve always been the stranger. I can’t go to any place without being the stranger. I am never in my country, according to people. Gaucho [in Bolivia], bolita [in Argentina].’

Ultimately, Fransezze concludes, ‘The hardest is to start something…because then it’s like a snowball effect. At the beginning it was difficult to show sponsors that we had quality products.’ Now Macondo Art is a well-established company which was involved in projects amounting to US$700,000 last year. Fransezze’s hard work and perseverance has been paying off, but he doesn’t take all the credit. He says that the most important secret to success is to have ‘a good team to succeed. And to surround yourself with people more capable than you.’ Today, for Fransezze, ‘the future looks beautiful, very promising…I am anxious, I want to see results already, but it’s a process that takes years. What you need is patience, and to have a very focused objective.’