My first cultural outing after arriving in La Paz in December was to sneak into the premier of Inal Mama at the Cinemateca Boliviano, followed by a live performance of the documentary's powerful soundtrack from La Paz favourites Atajo and friends in the cinema's basement carpark.

It was only after seeing the film again with English subtitles at the studio of director Eduardo Lopez Zavala - and interviewing the man - that I was able to appreciate what an apt introduc­tion to Bolivia Inal Mama is. As a 'po­litical, musical and visual essay about coca and cocaine in the cultures of Bolivia', it interweaves various social, historical, cultural and political facets of this country, and presents them in an audiovisual journey that takes us from the isolated Andean homes of the Kallawayas to the coca pro­ducing lands of the Yungas, down into the mines of Chapare and inside the overcrowded walls of La Paz's San Pedro prison.

"For me coca is an excuse to talk about Bolivia", Lopez explains, "and to talk about the country, placing it in a regional context and within a globalised conflict." That excuse was made possible in 2006 when Lopez secured Bolivia's first ever DOCTV-IB America award to develop the project. At the time he was in Brazil preparing for the restoration of the rediscovered silent cinema gem Wara Wara, but he raced back to La Paz and "wrote the project in one weekend or some­thing."

"Inal Mama has a continuity with other, older works", Lopez tells me. His "clearly interventionist" Camino de las almas focussed on the weaving community of Coroma, whose "strong connection with their heritage is contained in their textiles." It became apparent that these textiles were subject to widespread smuggling - "A business much more fertile and lucra­tive than cocaine," says Lopez. "This trafficking of heritage bothered me greatly...and this documentary an­nounces in various ways what would later be seen in Inal Mama, in the theme of the heritage of coca, the heritage of cultures."

Lopez mentions more than once that various people questioned why Inal Mama doesn't "make the theme of narcotrafficking more prominent? Or why not the new culture of coca, that of the cocaleros, which is Evo [Mo­rales]?...Why isn't it more concerned with crack, with the youth...? " And his response is that "the intention of the script of Inal Mama was for coca to be placed within the social fabric... which is where they have a clearer sense of it. Because coca produces an economic value and it produces a symbolic value, an abstract value."

Within the film this economic dimen­sion is particularly located in the figure of Nacipio, an inmate of San Pedro prison who was incarcerated for smuggling cocaine between Bolivia and his native Brazil. Inside and outside the walls of San Pedro (where it is known that backpackers can enter and buy cocaine), we also see protes­tors with stitched lips demanding the modification of Law 1008, imposed as part of the USA's goal of total elimina­tion of coca and cocaine produc­tion. 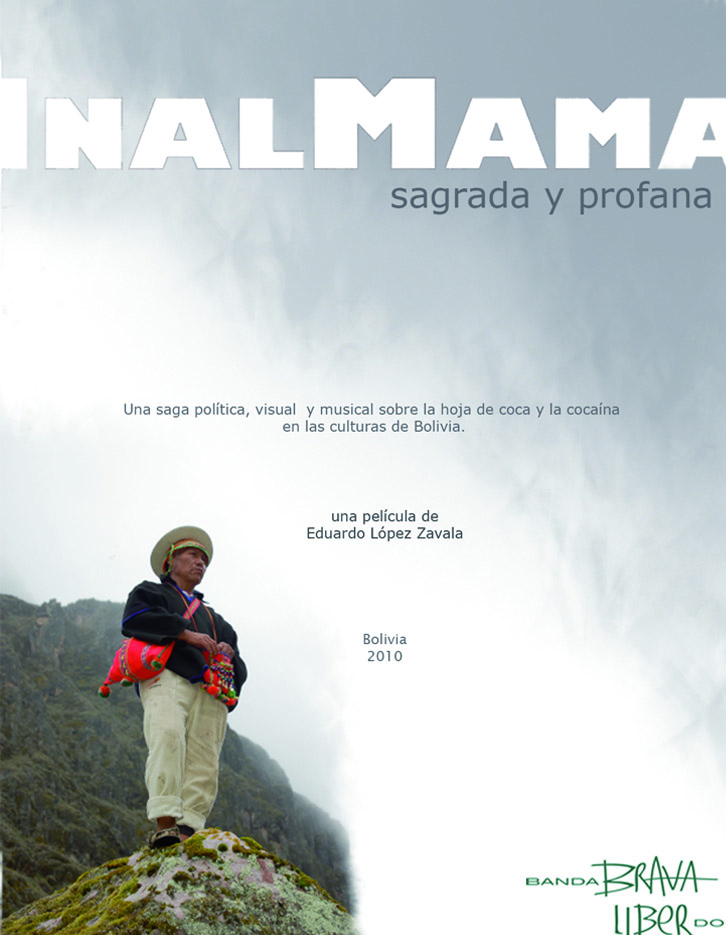 The symbolic aspects of coca culture are captured by two Kallawayas, members of traditional pre-lnca healing communities, whose journeys help create Inal Mama's narrative framework. The meeting point of these value systems is demonstrated in the bringing together of the coca producers of the Yungas and the Huarani community representatives who travel to meet them:

"The world today is one economy", says Lopez, "with many territories. And for me coca is an economic territory... that I wanted to survey, that I wanted to show. Hence this articulation between peoples so distant from one another, and who can't easily meet, such as the Huaranis and the Afrobolivians of the Yungas, or the Kallawa­yas and the miners. Various things went to tying them together which re­ally had as it were a symbolic, cultural and economic force in coca."

"I use documentary as a provocative process," he continues. "The Huara­nis have come to Chicaloma in the Yungas, have travelled three days to meet with the producers of coca there...The idea was that these bor­ders that impede coca arriving clean and arriving at a good price could be erased." In the film we see these negotiations taking place directly between these community representa­tives, carving out an 'economic territory' that defies the normal patterns of global capitalism.

Woven into the social fabric of these communities in which the film is placed is the "profoundly materialist" Aymara theology which divides the world into 'Alaj Pacha' (the world above), 'Aka Pacha' (the world we inhabit), and 'Uku Pacha' (the world below). There is no moral criteria between them, as Lopez explains: "they are comple­mentary, they are simultaneous or else they don't exist. And the sacred and the profane - and coca - it is within this order of things."

"There are two Kallawayas," he goes on. "At first they are together in their community, they are saying 'with this [coca] leaf and with this other leaf...', they are beginning to set up a world that is in the skies, that is Alaj Pacha. But I choose two of them to go on a journey. One goes to the inferno, the other to the sky. This one travels to Apolo, he sees the little girls in the coca plantations, gathers medicinal plants, reflects on the stupidity of a world that takes everything we have and sends us plastic. He's a sage. And the other one is too, but it is his lot to go to the miners, to go to rural areas... Uku Pacha is the Kallawaya that goes to the miners...It's the imprisoned Bra­zilian, the women in jail etc. And the descent into the mine is the descent to Uku Pacha as well. Symbolically."

This Kallawaya finds the miners, a key political and economic force in Bo­livia, chewing coca undergroud and proclaiming that without coca there can be no mining, and without min­ing, no Bolivia. "It is impossible to con­sider the history of the mines without coca", says Lopez. "And there had just occurred, when I started to shoot Inal Mama, a huge conflict in Huanuni [moving footage of which we also see during the film], where there was this massacre, between the unionised and the non-unionised miners. A fight between brothers; there were many deaths. "And it interested me that this conflict could reach such a level, and in a place that was that was marked out as coca territory, because it's mining territory."

He goes on to relate how in 1983-4 the MNR (Movimiento Nacionalista Revolucionario) "took the mining heart out of the economy, came out with Decree 21060, and sacked all the miners. And those miners were the ones who went to Chapare. And their children are the cocaleros. It's a very dense history. And in a country that's very...intricate in these respects. The past acts in the present in a very particular way."

Lopez has chosen to create this intri­cate picture (of "a society that is so complicated, so jumbled, so interwo­ven, so contradictory, so ungovernable... ") through "an urban opera, of the street...very much related to the groups and gangs that I already knew in El Alto and the Laderas." As such, much of the narrative is told or enhanced by the film's original soundtrack, mixing angry rock with traditional instruments and rhythms, plus a gorgeous chorus.

Lopez hopes that Inal Mama can reach a much wider audience "in Eu­rope and North America, where you say "coca" and the only perception is of a packet, a mirror, lines, a hundred dollars to sniff: this is coca. The plant doesn't exist, the cultures of coca don't exist."

He thinks that the critics in the Bolivian press who wrote about Inal Mama were "quite accurate" when they said that "it's not a documentary that registers a reality, with an off-screen narrator who explains this reality to you - no, it's loaded, it's woven together. Okay. This is exactly what the coca leaf does. The coca leaf sets things up, relates, conflicts, posits simultaneously the most prominent aspects of indigenous culture. And at the same time it posits the con­text of penalisation, of prohibition, of disqualification, of degradation, of humiliation..."