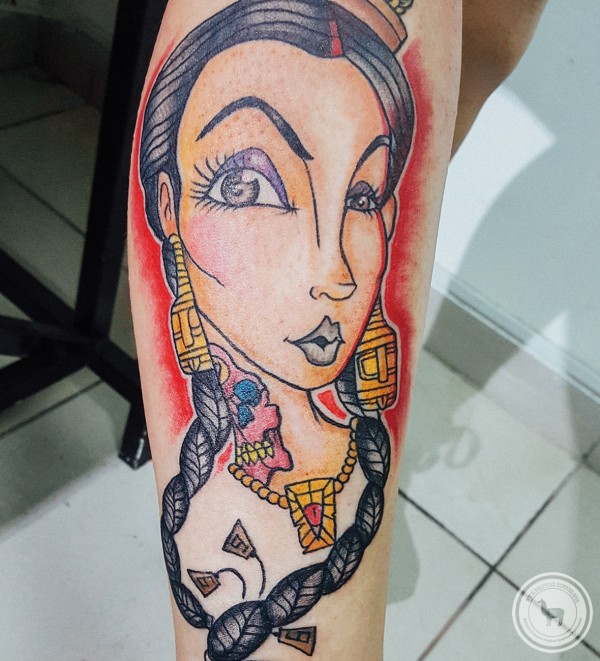 Let yourself be seduced by this sexy urban style

Since 2010, the tattoo scene in La Paz has experienced a revolution of sorts, as the Bolivian New School style has become increasingly popular within the community. The New School of tattoo design mixes the styles of graffiti and graphic novels, popular amongst a global movement of New School tattoo artists, with traditions and typical characters of Bolivia. The result: a new tattoo aesthetic that leaves the marks of the Bolivian national identity.

Juan Diego Alvarado, 28, was born in La Paz and is one of the pioneering artists that started creating these new designs. He believes that inking these images is important because, as he emphasizes, the relevance of cultural content and ‘identity factors’ are the central points of the Bolivian New School style. ‘The idea is to create designs to show part of the Bolivian identity,’ he says. ‘In this way, Bolivians can valorized our culture and spread it to other countries.’

Diego, known amongst his friends and peers as Jodido Diego, has also created a series of these designs, which have drawn accolades because of their originality and innovation. He calls them las primas – cholitas, but with a modern look that includes a rebel spirit. Juan Diego created his first prima in 2014, for a design book. His intention was to achieve a fusion between traditional Bolivian culture and contemporary elements. He incorporated elements of graffiti and comic-book styles in order to design a cholita that fit in with New School trends in tattooing.

Las primas always look like beautiful young girls, and all of them share similar facial features. They seem to be part of the same family, as if they are indeed primas.

The modern Andean graphics created by Diego consistently show a traditional symbol of La Paz – the cholita – from an innovative point of view, as the artist takes the risk of re-creating these typically traditionally dressed women as sensual pinup girls. Las primas are attractive and doe-eyed; their intense gaze shows their sex appeal. Some of las primas are naked; others exhibit less flesh, and a few are simply portraits. No matter the pose, however, there is an essential cholita-ness in each depiction, a concept from the collective social imaginary of the people of La Paz. For example, las primas wear Borsalino bowler hats and gold jewelry as indispensable accessories, and, of course, they have long dark braids – oftentimes drawn as coca leaves.

These primas also modernize the traditional cholita character. They are tattooed themselves. On their skin, Diego inks designs laden with symbols of La Paz’s identity: the city’s initials, the letters “LP”; tantawawa masks, a ritual element used in Todos Santos celebrations; coca leaves; Mt. Illimani; ñatitas, or Andean skulls that protect the home and promise miracles; chakanas, or Andean crosses; and other cultural symbols. Bolivian identity survives, even thrives, using these tattoos as a strategy.

The family of las primas is big, and it grows each year. Today this inked household has approximately 20 members, and it’s even going international. Elvis García is a Chilean tattooist who has a sexy prima tattooed on his left arm. ‘When I looked at her, I fell in love,’ Elvis says, laughing as he remembers the day he met la prima that captured his heart while he was visiting La Paz. He describes this event as ‘love at first sight’, and he confesses that the sensuality of the image was a factor in deciding to have it inked into his skin. Perhaps this flirty cholita wanted to know the sea, and used her most powerful seduction techniques to captivate Elvis with the objective to move to Chile with him. Nowadays, this prima lives in Santa Cruz, and each day she accompanies Elvis to his tattoo studio.

This creative metamorphosis – from the traditional presentation of a cholita paceña to a new, modern, sexy depiction is exciting. A little ink and a lot of imagination has turned an icon of La Paz into a sensual urban phenomenon.

If you’re looking for an iconic Bolivian twist to a tattoo, you may not be able to resist the seduction of las primas from the Bolivian New School. Give them a chance – they are really quite sexy!

If you are interested in a prima tattoo from La Paz, contact Juan Diego Alvarado at his Instragram: @jodidodiego. For more information about this artist, visit jodidodiego.com.