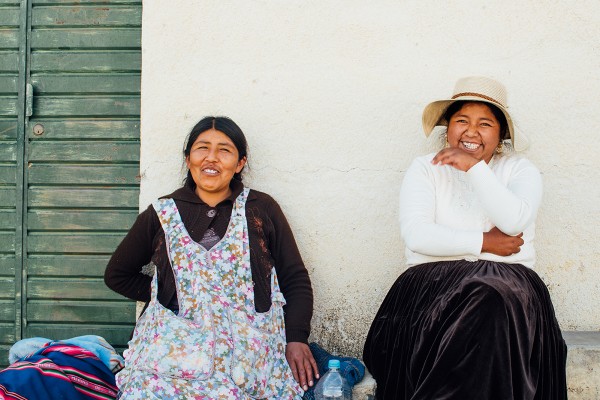 Code-switching between Aymara and Spanish

In the blazing sun, about 150 inhabitants of Wichi Wichi, a village on the banks of Lake Titicaca, gather at the local plaza. Every Saturday the townsfolk come here to discuss local issues. ‘¡Pido la palabra, pido la palabra!’ (I want to speak, I want to speak!) calls a resident. He raises his voice, demanding attention to express his opinion on the topics discussed in this week's meeting. When it is finally his turn, he stands up and starts his dialogue in Spanish: ‘Compañeros y compañeras de nuestra comunidad, es tan importante que…’ (Ladies and gentlemen of our community, it is important that…). I miss the rest, because he continues in Aymara, an indigenous language spoken by over two million people in Bolivia.

This phenomena is called code-switching, and it occurs when a speaker alternates between two or more languages. Some of the attendees of the municipality are bilingual speakers, and they sometimes use elements of both Spanish and Aymara when talking. Rosalia Mamani, 51 years old, is fluent in both languages, and splits her time between Wichi Wichi and El Alto. She mainly resides in the city, but has a passion for the countryside and its people because of her campo roots. As a result, she alternates between the two places every weekend and, consequently, between Aymara and Spanish. ‘In El Alto I speak Spanish more often, because not everyone speaks Aymara, and in the countryside it is the other way around – there the majority speaks Aymara,’ Rosalia explains. ‘But sometimes I unconsciously mix between the two languages when conversing.’

I observe the people at the plaza in Wichi Wichi and listen to the conversations of Rosalia and her friends. I try to detect when she switches between Aymara and Spanish. With older people, she mainly speaks in Aymara. I don’t understand much of their conversations, but occasionally she drops some Spanish – mostly numbers and linking words. ‘I don’t know exactly why, even though we also have these types of words in Aymara. It is just easier to express them in Spanish,’ she says. Rosalia turns to her younger cousin and suddenly switches to Spanish. I ask myself, Is this a matter of age?

Juan de Dios Yapita, a professor in Andean linguistics, studies the language patterns of Rosalia and her neighbours. ‘In Bolivia, multilingualism is well-represented. There are a lot of people who speak another indigenous language besides Spanish,’ Yapita says. In general, the Bolivian society is ‘Spanishised’, but in rural places such as Wichi Wichi, indigenous languages are still widely spoken, especially among the older generation.

Maruja Mamani was born and raised in Wichi Wichi. Her generation is much more accustomed to speaking Spanish. ‘Initially I only spoke Aymara, because of my parents,’ Maruja says. ‘When I was of age to go to school, I learned how to speak and write in Spanish.’ When she texts her friends, she always writes in Spanish, ‘simply because I never learned how to write in Aymara,’ she explains. Still, Maruja often uses Aymara because her grandparents never went to school and only know basic Spanish. In order to communicate with her family members, she must speak Aymara. Occasionally, however, her knowledge of the language is inadequate; instead she uses a Spanish word.

A pure language doesn't exist, and every language has adopted words from other languages. Yapita explains this as the metamorphosis of language. ‘Words have a lifecycle; they are born, live, and die,’ he says. ‘Languages are in contact with each other, which influences their vocabularies.’ This also applies to the following example given by Yapita; words like cable car and cell phone didn’t exist in some indigenous languages. Therefore the Spanish words teleférico and celular are transformed into their Aymaran counterparts: teleferico – without accent – and celulara.

This is an example of differences in phonology. ‘Aymara doesn’t have accents, therefore the movement of the tongue is different; in Aymara it goes down, while it in Spanish goes up,’ Yapita explains. As a result, sounds in Aymara are more monotone because there is no stress on any particular syllable. In Spanish, accents are essential; words can lose the definition when not pronouncing them properly. ‘For example, when demanding someone to sit down, one would say siéntate!’ Yapita says. ‘Speakers of Aymara often don’t pronounce the accents when speaking Spanish, because they are not accustomed to its added value.’

‘Sometimes I unconsciously mix between the two languages when conversing, this goes spontaneously.’
- Rosalia Mamani

Another common mistake made by Aymara speakers in Spanish is the use of the wrong article. ‘They can’t help it, because Aymara doesn’t distinguish between masculine and feminine words,’ Yapita says. Additionally, word order is different; Aymara sentences start with the subject, followed by complements, and finishing with verbs. ‘These differences in grammar often cause confusion, especially for bilingual children in primary school,’ Yapita says. ‘They are just learning how to read and write, and don’t identify the differences in grammar between the two languages.’

Yapita also encountered cases in which speakers of Aymara literally translated their words into Spanish. ‘They say: estoy en aqui (I’m in here), which is incorrect Spanish, it should be: estoy aqui (I’m here). But it makes sense in Aymara, because the Aymaran equivalent could be translated this way,’ he explains.

In Wichi Wichi, I try to recognize the examples given by Yapita. My knowledge of Aymara doesn’t reach beyond the basics I picked up during my stay in Bolivia, so I find it hard to tell when the languages are in contact. I’m not a linguist, but I detect some language borrowing. An older cholita stares at me, and chuckles to her neighbor. They speak in Aymara, but one word I do understand: gringuita. Their curiosity cannot withhold them from talking to me. While having apthapi, one of them says: ‘Amiga, tomate estito!’ (Friend, take this!) I take a chuño from the mound of potatoes laid out on an aguayo, and analyse the words she uses to invite me in the sharing of food. Shouldn’t it be Amiga, toma esto? Almost unrecognizably, she transformed one short sentence into an Aymara-inflected Spanish one. This linguistic metamorphosis, although far from orthodox Spanish, was easily understood to my ears.