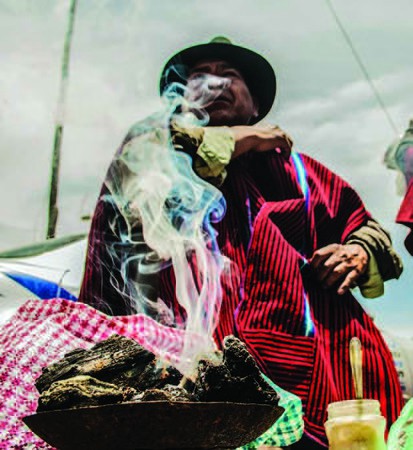 Felicia Lloyd Speaks to Grover Quispe, a Local Kallawaya, to Understand the Past, Present and Future of Traditional Medicine

Llamas, lakes, less-than-safe public transport, cholitas, coca tea, and medicinal healers are all images we learn to associate with Bolivia, sometimes stereotypically. In the latter case, Kallawayas—traditional doctors of the Andes—are practitioners of a discipline popular and powerful enough to rival a Westerner's blind faith in modern drugs and science.

Here in Bolivia, a visit to a local Kallawaya (which comes from the Quechua ‘kolla’, for healer, and ‘waya’, for wanderer) for a herbal remedy or a spiritual ritual to clear up a cold, is as commonplace as it is for a Westerner to make a quick trip to the local chemists for some Lemsip. Kallawayas, doctors of traditional medicine, whose origins date from the early Tiahuanaco period, are today considered ‘naturalists’ as a result of their extensive knowledge of plants and their uses.

The Kallawaya are a subgroup of an Andean Aymara group; while there are thirty-one different indigenous groups who consider themselves 'healers', the Kallawayas are by far the most famous and highly regarded. According to Ronald Watson and Victor Preedy (authors of ‘Botanical Medicine in Clinical Practice’), traditional methods of healing are so popular that 80% of Bolivians will visit a Kallawaya at some point during their lifetimes, and 30% receive no Western medicine at all.

Whilst this could be attributed to a lack of cultural trust in modern science combined with financial obstacles, historically speaking, the Kallawayas have an extensive history of knowledge and exploration. It is said that these healers were performing brain surgery as early as 700 AD, and that their knowledge of plant concoctions and the simplest ingredients can produce remedies for some of the most complex illnesses. The Kallawayas were the first, for example, to use the dried bark of the Cinchona tree as an antimalarial substance, and coca derivatives as anaesthetics. As Kallawaya Victor Quina assured us, as hard as some plants may be to get hold of 'there is a herb for everything'.

Many Bolivians consider themselves to be their own 'healers', resorting to treatments ranging from lime juice (for mosquito bites), to coca leaves (to treat anything from altitude sickness to allergies). The Kallawaya practice is influenced by the Andean perception that illness occurs as a result of the disturbed interrelation between a person, the land and those around them—in other words, if both living and inanimate beings do not treat each other with respect, then the cosmic flow between all beings and things leads to imbalances, and with them illnesses.

To correct this imbalance it is important to understand that all beings are not isolated but interrelated. Thus, to rectify a physical or psychological ailment you must rectify the relation among natural beings.

To find out more about Kallawayas and traditional healing, I spoke to Grover Quispe Tejerina, a Kallawaya who works in an office among the higgledy piggledy shacks and corrugated iron roofs that compose the backdrop of the Witches’ Market of La Paz. Contrary to what I expected (a withering Dumbledore-esque man dressed in nothing but a poncho, perhaps riding on a floating llama), we were greeted by, forgive the irony, a rather Westernised-looking Doctor dressed in a simple shirt and a leather jacket.

The only thing that possibly gave him away to his affiliation with Andean tradition was the gold-rimmed rows of teeth that glinted as he smiled. Tucked away in his shadowy office, adorned with golden frogs and bejewelled snakes, colourful flags and calendars following an unrecognizable chronology, Dr. Grover Quispe began to inform us of how he became a Kallawaya, and what it meant to be one in Bolivian society today.

When asked about his patients and treatments, Dr. Quispe was fiercely proud of his trade. 'It has never failed me’, he said. He claims there has been no malady so grave that Dr. Quispe hasn't been able to cure it. This is not to say that he doesn't believe in the strength of Western medicine, but he often finds that many people come to him having visited a modern medicine doctor beforehand, and bring faith that traditional medicine goes further and deeper in fixing the problem.

'Many people come to me out of fear’, he tells me. 'We believe the 'ajayu' (soul) can leave the body when you're scared, and that leaves you vulnerable to illness. As a Kallawaya, people come to me to call their soul back, so that they regain their strength and fight the illness off'.

One thing I was particularly curious about was to the extent to which his practice is supported by tourism; you need only walk a few steps through the Witches’ Market to notice that it is, for many of the vendors, the 'gringos' that are the desired demographic.

Prior to my investigation I was convinced that most tourists who visit these healers did so as an easy way to 'get high (man)'. However, Dr. Quispe assured me that the majority of his patients are genuine, and he does not attend those that aren't.

Tourists who come with a 'fake illness' are easily detectable, and go home untreated. Since Kallawayas are highly regarded in the community, it is also possible to find those who fake their healing powers. With a disapproving look, Dr. Quispe mentioned how it is possible to find 'fake Kallawayas', who treat the practice as a means to earn money and achieve authority in society. You can tell if a Kallawaya is 'fake' because he won't be able to speak the secret, ancient language 'Machaj Juyai'.

The Kallawaya power is something that resides in a family through an indefinite number of generations, and it is a knowledge or practice that Dr. Quispe learned from his father (although some Kallawayas are said to have been chosen by a strike of lightning bolt). It is possible for a woman to be a Kallawaya, since in many rural communities they are the ones to collect, dry and preserve the herbs for remedies. While the Kallawaya practice can be learnt, it is a power that is predominantly maintained and passed down the male lineage, from father to son; if a female Kallawaya were to die, then the power dies with her, and does not pass along a generation.

Dr. Quispe is optimistic about the future of traditional medicine, assuring me that it would continue to thrive, since the knowledge and practices were a well-preserved secret. ‘If you are blessed with the power’, he explained, ‘there is little that can be done to avoid assuming the role of a Kallawaya’. If a child were to deny the Kallawaya heritage, then he or she would encounter many problems in life. As Dr. Quispe said 'it is like a destiny'.