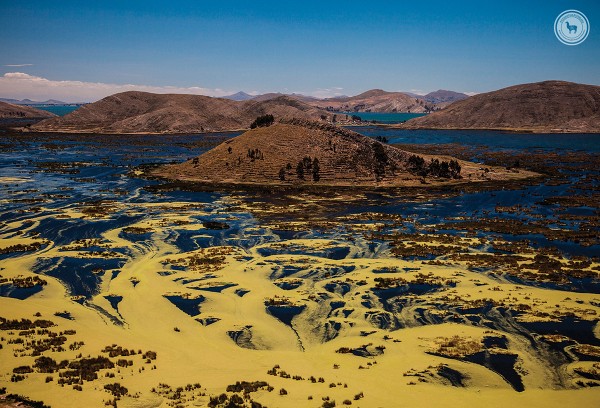 Making my way down to Copacabana by bus, leaving behind the crowded streets of La Paz, I see the landscape changing. From an urban jungle of diesel-spewing minivans, dust, and rubbish, to a place where natural beauty and fresh air is the norm. As I wander along the shores of Lake Titicaca I am struck by an intriguing and serene feeling, but my excitement over the lake’s many allures is disrupted by the amount of rubbish I walk by. Further along in my stroll, I find more junk that pollutes the lake. No one seems to pay attention to this sad and worrying situation. Children are playing carelessly in the water while their parents enjoy truchas criollas on the lakeside.

This dichotomy is representative of the future of the country’s flora and fauna. The lake is a great example of Bolivia’s extraordinary beauty and is home to a phenomenal and colourful biodiversity. Its future, however, is at risk. Climate change and pollution are some of the culprits devastating the Bolivian environment, but how do we, as a society, connect with these issues?

This is the question behind Planeta Bolivia, a collection of short films that shows the country’s beauty in contrast with shocking images of the damage that has been done to ecosystems in Bolivia. The series was made by former president Carlos D. Mesa, anthropologist Ramiro Molina, environmentalist Juan Carlos Enríquez and film producer Marcos Loayza. It warns of climate change and denounces environmental contamination. It creates a feeling of confrontation and shame in regard to our personal environmental footprint.

The protagonists of this complex environmental reality are water, land, climate change, and population density in Bolivian cities. The images of Lago Titicaca are telling. ‘People throw all kinds of human trash into the rivers that drain into the lake,’ Loayza points out. ‘The problem starts in El Alto, where most people pay little attention to the degradation of water resources.’ As a result, the image of the world’s largest high-altitude freshwater lake is characterized by dirty shorelines full of soda-cans, rubbish, and animal waste.

The first film in the series shows discarded bottles floating in the lake, causing plastic pollution and disturbing the fish population. It captures green algae extending towards the shores of the peaceful agricultural islands that are home to indigenous communities. It displays rust-coloured rivers fed by wastewater from mineral processing. On top of pollution, its water level is decreasing. The lake suffers from severe drought and the glaciers that fill it are retreating. ‘It is a process that has developed much faster than we expected, and it is likely to become the most important effect of climate change,’ says former president Mesa. The polluted water that flows downstream from El Alto has reduced the availability of clean water for irrigation and domestic use in the area.

The filmmakers adopt a bold and unusual approach in their filmmaking. The documentaries don’t rely on traditional techniques, such as a voice-overs or testimonials of people explaining a wrongdoing. ‘We present the problem,’ Mesa says, ‘and insist that people think about how they can face these big issues. We are not pointing at the guilty, we are not proposing solutions, we want to change the people’s perception of environmental problems.’

‘To be realistic, we are not going to transform the world or Bolivia with our films, but we think we can contribute to a new environmental awareness,’ Mesa says, optimistically.

‘At this moment, Bolivians have a tendency to think that environmental issues are problems of the other,’ says Loayza. ‘Not only the United States, Europe, or even big industries are facing and causing these dilemmas. We also have a fragile ecosystem.’ According to Loayza, resilience is key to a changing environmental perception. He believes that if one person changes his or her mind-set, it can inspire other people to follow.

As important as personal responsibility is, Mesa doesn’t rescind the importance of collective accountability: globally, nationally, and locally. ‘For example,’ he explains, ‘the government of Bolivia has to adopt a much more committed position in this environmental dialogue. The current government is favourable to this discourse because it claims to defend and to be a brother of the environment,’ he says, in reference to the Ley de Derechos de la Madre Tierra, which defines Pachamama as a collective subject of public interest.

Mesa critiques the government for its lack of rigorous policies that protect Bolivian nature. ‘The state is in a very preliminary position when it comes to collaboration with other stakeholders,’ he says. Although, one should take into account its position; natural resources are crucial for the country, and demanding that they are not extracted deprives the country from economic development other nations have enjoyed from doings in the past. And the private sector also has a share in pushing the environmental systems towards their limits. As an answer, Mesa argues that countries, companies, and communities should share responsibility and have better relations in order to work collectively on environmental protection.

In the case of the lake, which borders Peru and is home to several communities, cooperation is crucial for its future. By using different media platforms, including social networks, the filmmakers developed a mechanism that allows anyone to participate interactively in this debate and exchange their opinions. In order to reach a younger audience, the films are shown at schools. ‘If they change their lifestyle now, it will give hope to the future,’ Loayza says firmly, referring to the next generation.

I think about my experience on the lake and its polluted waters and recall the people I saw there. They seem unaware that Copacabana’s unique territory is exposed to contamination. Two images come to mind, that of a dirty shoreline and people enjoying comfort.

Sometimes people seem to go on without thinking about the future. I can see a lack of environmental consciousness in some people, and understand why it is necessary to promote this conversation. The lake allowed me to see the face of environmental degradation. Mesa and his team have been able to capture this bitter development, and the pictures presented in the films are almost frightening. The country’s physical beauty and its impurities are impressive and have the same effect on the viewer as the lake had on me. This contrast will hopefully make people aware of their role in the environment and inspire them to contribute to a healthier lake.