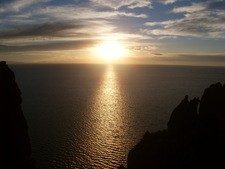 We spent this weekend in Copacobana by Lake Titicaca. Those of us without dehabilitating hangovers left on Friday morning to arrive in time for lunch. Worryingly, when we asked about our hostel in the tourist offices (the immediate impression of Copacobana is that it is far more touristy than La Paz), no one seemed to have heard of it. After an hour’s searching, we finally found our hostel about 1km out of town down the beach. We were led through a building site to the only room ready for visitors. Apart from the occasional electric shock while adjusting the cold showers and the pack of dogs barking incessantly through the night, we were relatively comfortable.

We climbed the hill on the edge of the beach to watch the sunset with a couple of bottles of Bolivian wine. The view was stunning, and the wine… interesting. After an equally interesting descent down the mountain in deteriorating light, we bought more wine, and several bottles later, found ourselves stumbling down a jetty on the lake.

Despite splashing out for the 24 Bs (£2.40) bottles as opposed to the 17 Bs ones, roles were reversed on Saturday morning on the boat ride to Isla del Sol, as those who were hung-over on Friday offered as little sympathy to us as we had to them. Isla del Sol was also beautiful. The Incas believed it was the origin of civilisation, and without meaning to sound too gap yar, it did feel like a pretty special place. Dumped on the north side of the island, we had to trek 12kms to the other side to be picked up by the boat three hours later. In spite of hangovers and food-poisoning, it was a very enjoyable trip.