Ladies of the Fight 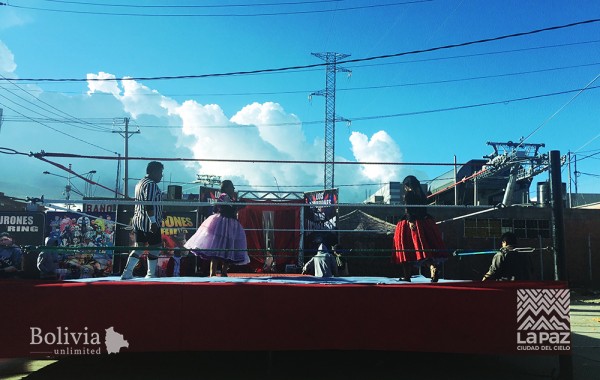 A Sunday afternoon in the wrestling ring

As we navigated the bustling Sunday market in El Alto around stalls selling everything from shoe laces to car parts, we were approached by two women dressed in traditional cholita garb. They asked if we would like tickets to watch the cholita wrestling match which would be taking place later that afternoon. It was perfect timing, as we were in El Alto for that very reason. I had been fascinated by the concept of cholita wrestling, having read about its empowering message – something often noted by the women involved – but I was also curious about how it might be exploitative to those same women, as a potentially voyeuristic way for tourists to witness the exotic indigenous ‘other.’

The women offered us a special tourist rate that would give us the opportunity to have our photos taken with the wrestlers, but we opted for the less expensive 40-boliviano tickets – just general-viewing seats, as we didn’t want to draw too much attention to ourselves.

But when we took our seats in the open-air ‘arena’, cordoned off by a wire fence and consisting of a number of plastic chairs all facing towards a central wrestling ring, it was apparent how entirely out of place we were. We thought this event would be overrun with tourists, but it was dominated by locals, particularly families – including, naturally in El Alto, many other cholitas. Halfway through the event, the action stopped and there was an announcement that us extranjeros needed to take photos. Even though we had opted out of it, we found ourselves being photographed by the event staff as we stood alongside the fighting cholitas whilst the rest of the audience watched in amusement.

The event was dominated by locals, particularly families – including, naturally in El Alto, many other cholitas.

There are several locations across El Alto where cholita wrestling takes place. The larger venues, like the Coliseo de 12 de Octubre, feature events that are geared more towards tourists – with some review websites even calling them ‘tourists traps.’ Attendees can book through their hostel or hotel.

But our experience at the wrestling ring was different from what we had imagined it would be. The event started almost an hour late, in classic Bolivian fashion, but there was plenty to observe as we waited in the sun. Vendors passed through the audience selling various snacks whilst young children giggled and played in the open spaces. A rousing soundtrack boomed out from the overhead speakers between regular announcements that the action would start soon.

When it finally started, the action consisted of wrestling between men, wrestling between cholitas and then wrestling between cholitas and men. Notably, there was a complete level of equality between the wrestlers. At no point in this violent, traditionally masculine activity was the femininity of the cholitas mocked or even really considered – though the cholitas maintained it throughout. They fought ferociously, landing punches and throwing each other around. However, they were also victims of the violence too – none of the men exercised any caution as they grabbed the cholitas by their signature braids and pushed them to the ground. Interestingly, the only other tourists – two women who sat behind us – made more comments about the rarity of cholitas wrestling than any of the locals. ‘Oh no, not her pretty dress!’ one of them exclaimed at one point as the wrestler was beaten over the head with a wooden crate.

One local we spoke with emphasised the positive social impact of cholita wrestling. He said that the wrestlers involved demonstrated the strength of women, as many would fight a male wrestler, or even several, proving that women can excel in a violent, forceful sport too.

Though the wrestling was evidently staged, the violence was often genuine-looking enough to cause me to flinch on numerous occasions. But the other audience members were not so easily fazed; they shouted and laughed enthusiastically as the underdog in each match – oftentimes a victim of the referee’s overtly emphasised bias – always managed to fight back.

This wasn’t a typical Sunday-afternoon event; nevertheless, it was clear that the families in attendance were loving the spectacle. As we watched the fighting play out, two small Bolivian boys next to us began fighting in a similar fashion.

By their overt show of strength, the cholita wrestlers embody the increasingly prominent Bolivian idea that women are as equal to men to perform any task.

Recent coverage of cholita wrestling has tended to focus on the reclamation of traditional female power through an overt show of strength, which embodies the increasingly prominent Bolivian idea that women are as equal to men to perform any task. It’s important, however, to remember that cholita wrestling, like most professional wrestling, is a spectacle designed to entertain and generate money. Although they might not be considered ‘real’ athletes, within the makeshift wrestling stadium the cholitas were as powerful as any of the men, and they were admired, supported and heckled by the audience in exactly the same way that the men were.