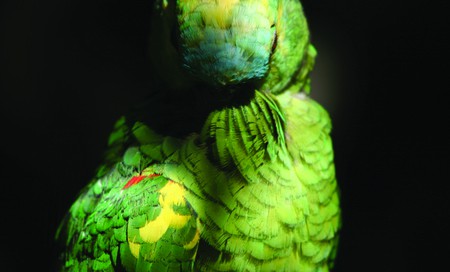 La Senda Verde animal refuge, located below the town of Coroico in the heart of the Amazon basin, is a safe haven for a range of wildlife. More than simply housing and feeding the monkeys, tortoises, wild cats and bears, the sanctuary gives animals who have suffered mistreated and unsettled lives another chance at happiness, where they are safeguarded with love and care by Vicky Ossio and Marcelo Levy, the sanctuary’s owners.

The animals are the primary focus of La Senda Verde, and parallel to this the refuge supports social awareness and education about the natural world. The sanctuary also operates as a privately run eco-tourism resort; a natural retreat offering relief from the stresses of modern day life. In this tranquil environment it is easy to forget that the prior hardships endured by the animals often stem from heartless human behaviour. This tough back story conceals itself behind the sanctuary's Utopian façade of harmonious cohabitation between man and beast.

Vicki and Marcelo began the project that was to become La Senda Verde in 2003 and the refuge has since developed into one of the leading gateways to explore the wilderness and wild animals of Bolivia. Vicki fell in love with the area of Yolosa and the idea of founding an eco- tourism centre that could educate citizens of La Paz and develop relations between the city and the natural world. They also planned to provide facilities and hot food for mountain biking tours on the infamous 'Death Road'. On a day that would change their lives Marcelo brought back a male Capuchin monkey to their new home after he had stopped an animal trafficker on the track which runs through the valley. The Capuchin was to be sold in a market until Marcelo convinced the man to hand over the monkey in order to take care of it in a responsible manner.

Following the arrival of Ciruelo, which means plum in English, LSV has become the new home for over 350 animals including approximately 70 monkeys of various species including Squirrel, Spider and Howler monkeys and capuchins. The monkeys in particular have suffered appallingly in the past Chaska, Anachi and Tuego - three female Capuchins, were rescued from a house in Potosi, where their owner had dressed them up in clothes and made them dance in the street for money. Another capuchin, a male named Martin, was fed copious sugary treats, causing him to lose his front incisors. As well as 40 turtles and 50 tortoises LSV also houses a margay, an ocelot, and a caiman. There are a vast number of birds including numerous parrots, guinea fowl and a toucan. Many of the animals are brought in by Animals SOS, an organization which finds animals in inappropriate and often inexcusable circumstances. The ambiance turns dejected as Vicki explains how humans frequently forget that animals have feelings and how 'awful it is that the animals have to come here'. Yet her face lights up when she describes how the animals are 'given back the opportunity to find a family and live happy lives'. The couple's consideration for the animals is also evident in the rehabilitation system they have developed. They provide appropriate living conditions for the creatures, in accordance both with their corresponding natural environments and their individual needs. LSV works by means of semi-captivity; the animals are given a certain degree of freedom with suitable nutrition - analogous to what they would obtain in their natural habitat. Semi-cap- tivity also means that for their own protection some animals, notably the monkeys, are required to bear tethers. New and naughty animals are often quarantined before being allowed to enter or re-enter designated areas.

Laws in Bolivia forbid the reinsertion of certain endangered animals back into the wild, but by living comfortably in semi-captivity these creatures can fulfill a pedagogic role. Los Monos in particular possess abundant primitive spirit, and observation of their instinctive behavior is fun and educational, a key component of the LSV experience. The refuge plays host to both school and university groups, as Vicki believes there exists a 'responsibility to educate' future generations. As human beings, she explains, it is imperative to appreciate the responsibility we owe to the Pachamama to take care of the natural world. Vicki also devised a scheme to develop awareness of wild creatures, asking that school notebooks display photos and information of an animal on their covers as opposed to depicting contemporary pop stars and TV personalities. Unfortunately her proposition was unsuccessful. Further to their personal educational aims at LSV Vicki and Marcelo are adamant that commercial zoos should be required to focus on educating visitors rather than solely concentrating on generating prof-its. Nevertheless, LSV must also ensure its financial survival. There are scarce state resources for wildlife projects in Bolivia, and in addition, the sanctuary's remote location means that founding and developing communications with potential investors is a problematic affair. The refuge must rely heavily on its eco-tourism resort for economic support.

Fortunately eco-tourism also brings dedicated volunteers, without which the inspirational work carried out at La Senda Verde could not occur. Working together to complete tasks, volunteers either rotate around the various areas of the refuge or are designated to special projects. Volunteer Joe Rodgers for example, who has returned to LSV for the third time, is tending to a baby ocelot that has recently arrived at the site. Although not normally a 'cat person', he loves spending time with the animal which shares his room, is keen to play fight, scrabbles at his shoelaces and sucks on his thumb! Another volunteer, Surya Schimana-Chillel, is taking part in a surrogacy project with a baby howler monkey named Barbus who requires 24 hour care. The volunteers love their work at the sanctuary: volunteers Adi Einav, Michelle Taylor and Ben Manning, as well as Joe, have all returned to the centre. I heard that some volunteers' parents have even visited the site and stayed to help out with the work. Volunteer Rosalie Miller, whose connection with and love for the monkeys is especially captivating (despite the fact that a male spider monkey left an unwanted surprise in her shoe!) explains how 'time disappears in this place'. Her words exemplify the serenity that LSV propagates upon its volunteers, visitors and permanent staff. La Senda Verde is a 1rue refuge, and Vicki and Marcelo's mission is to enable animals and humans to learn from each other, rediscovering the meaning of love and the value of nature.