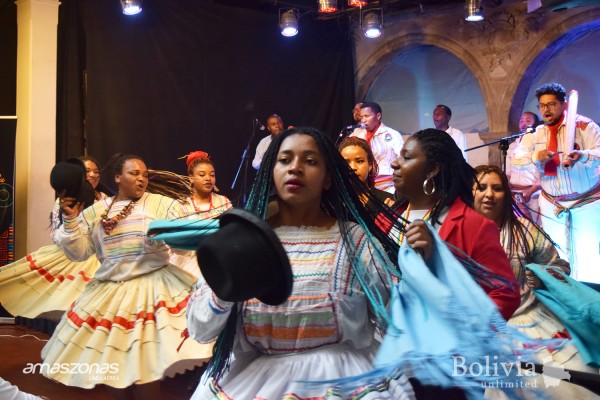 Afro-Bolivians struggle for recognition of their place in Bolivian history

This year marks the 10th anniversary of the passing of Law 200 of the Bolivian Constitution, which officially declared September the month of afrobolivianidad and 23 September as the day of afrobolivianidad. As Bolivia’s black population lived in obscurity and exclusion for centuries – its existence not recognised officially until 2009 – what is meant by afrobolivianidad, or being Afro-Bolivian, is still taking shape. If the televised celebrations on September 23 of last year are anything to go by, it is defined by saya – Afro-Bolivian dance and music – and an eternal struggle and need to reiterate that people of African descent have contributed to Bolivian culture and society, and not just in the realms of entertainment or sports. Saya forms a large part of the celebrations of afrobolivianidad; in Bolivia, it is an important way of passing on oral history as well as embracing African roots. On the surface seeing people of all races and ages moving in and out of sync with the dancers gives the impression of joy in diversity. But as Irene Torrez, the president of the Movimiento Cultural Saya Afroboliviano (MOCUSABOL), points out, ‘Saya is not everything.’ The drums of saya seem to drown out other African contributions to Bolivian society, culture and history, as well as a centuries-long struggle of Bolivians of African descent for basic rights and recognition.

Until 1980, saya was confined to small communities in the Yungas region of the eastern foothills of the Andes, most famously in the village of Tocaña, just north of Coroico. The spread of saya to Bolivia’s metropolitan centres has given much-needed visibility to Bolivia’s African-descended population, and it often provides Afro-Bolivians opportunities to earn their living as performers. But as saya has become more commercial, as is often the case with art forms which have roots in minority communities, its significance and function have largely been lost on the audience, and it’s thereby been compromised. At its root, saya is not just about the movements involved or its rhythm; it also evokes important historical events and notable figures. For example, ‘Si yo fuera presidente’ (If I were president) is a well-known saya that honours Manuel Isidoro Belzu, the Bolivian president who abolished slavery in 1851.

Torrez, of MOCUSABOL, has built her life on the rhythms of the Yungas and has deep love and appreciation for her craft, proudly showing off the trophies and plaques that adorn her small office near the Miraflores neighbourhood of La Paz. But she allows that the Bolivian people’s admiration for the art form can be at best superficial. ‘Saya is important – it connects us to our African ancestors and gives us a sense of pride,’ she says. ‘But a lot of people think all we can do is dance, and they don’t have respect for what we do. Sometimes people pass comments like, “Look how sexy black women are when they dance.” They don’t pay attention to the lyrics of the songs or understand their true weight. We are just objects for their entertainment.’

Whilst people might be open to their music and dance, Afro-Bolivians have had to struggle to be accepted as a people by the rest of Bolivian society for centuries. In spite of legislative and historical changes, they are still victims of discrimination on various levels. They live in relative poverty, face social exclusion and are subject to frequent racist behaviour. Part of the problem with Afro-Bolivian representation stems from the fact that they make up less than 1 percent of the Bolivian population. Their cries are easily muffled, particularly in a country where over half of the population identifies as indigenous and were victims themselves of similar abuses for centuries. Afro-Bolivians’ role in Bolivian history is too easily erased, and their historical experience is very often summarised into a sentence or two – if mentioned at all. Paola Inofuentes, an activist and the executive director of the Afro-Bolivian Centre for Integral and Community Development, puts it succinctly: ‘To the average person, our history goes like this: We arrived as slaves, moved to Los Yungas and then we were liberated. The end.’ But the history of Afro-Bolivians is much more complicated and of much more consequence, for Bolivia and the Spanish empire itself.

The first Africans arrived in Bolivia in the 16th century, as slaves to strip out the rich mines of Cerro Rico, near Portosí, where countless perished due to the inhospitable conditions they were subjected to (the exact number of deaths is impossible to know, but there are estimates that five to six million forced laborers – indigenous and African alike – died in the mines of Cerro Rico). And, like elsewhere in the Americas, both North and South, Africans were forced to perform agricultural labor – oftentimes in appalling conditions. ‘African slaves were transferred to the Yungas partly because the region was in need of manpower, says La Paz–based historian Roger Leonardo Mamani Siñani, ‘and it is said that they arrived knowing how to grow sugar, cotton, and tobacco – all of which grow well in Los Yungas.’ Even after the official abolition of slavery in the mid-19th century, Afro-Bolivians continued to be oppressed by the mestizo elite until the 1952 National Revolution, after which extensive land-reform laws were passed. Even then, though, Afro-Bolivians have faced discrimination and systemic economic hardship up to and including the present day.

Juan Angola Maconde is an Afro-Bolivian economist and one of the foremost experts and researchers in the realm of black history. Originally from Dorado Chico, Yungas his first book, ‘Raíces de un pueblo: cultura afroboliviana’, was published in 2000, and received attention elsewhere in Latin America and even the United States. He emphasises repeatedly that his works have received more attention outside of Bolivia, though he was presented with an award for his research in September of last year – one of the few Afro-Bolivians to be commemorated outside of the area of saya. ‘There has not been much research into the role of Afro-Bolivians in the War of Independence,’ he says. ‘There were black battalions that participated. They were known as Los Batallones de Terror, and many of them perished in the conflict. Their names are unknown because they were slaves who participated in the promise of eventual freedom. We do know that people of African descent participated in the Chaco War, and this is well documented. The likes of Pablo Murga, Pedro Andaverez Peralta and Demetrio Barra emerged as heroes. But once the black and indigenous soldiers returned from the war, they were still subjected to servitude under the hacienda system, and this did not change until the revolution of 1952.’

Pedro Peralta is the most prominent Afro-Bolivian to emerge from the Chaco War, even being recognised by the Bolivian Parliament in 2018 as ‘an exemplary son of the Afro-Bolivian community and culture’. Recognition of heroes like Peralta is a victory and shows some signs of progress for Afro-Bolivians after centuries of being ignored, but there is still a long way to go. ‘The legacy of colonialism and slavery and how it affected us and continues to affect us are not considered,’ Inofuentes explains. ‘I think that some people feel like the fact that we are being acknowledged is enough, and we should feel grateful. But we are not acknowledged for the role we played in liberating this country, and the current issues we face are ignored by everyone.’

Perhaps as a new generation with better access to opportunities, with the added advantage of being better connected and with new notions of afrobolivianidad will begin to emerge. ‘Now with the Internet, it’s easier to find out about people like Malcolm X, and find role models,’ says Inofuentes. Acknowledging the role of Bolivians of African descent in the independence struggle would involve a lot more research, but it could go a long way in shaping blackness in Bolivia, and it would reinforce the idea that they have played roles other than entertaining or serving. In the past 10 years, black Bolivians have gone on to occupy positions of power – people like Jorge Medina, former chief of police Abel de la Barra and the deputy minister of culture Juan Carlos Ballivián. Hopefully, the coming generations will produce more examples of black Bolivian excellence, carrying the knowledge that their ancestors played a role in their freedom.