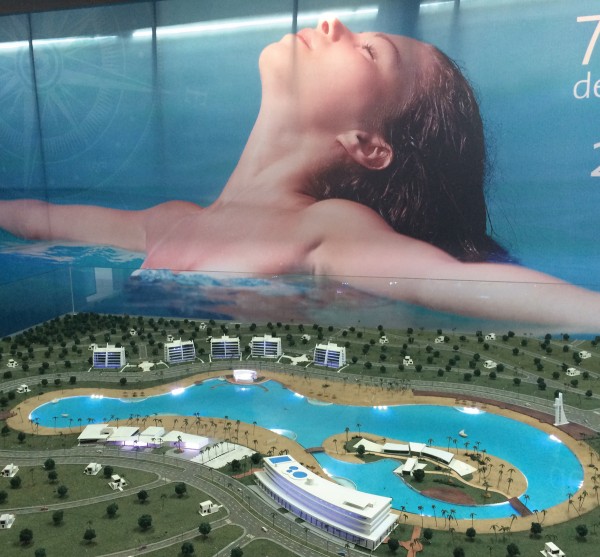 The Playa Turquesa website shows a slim, bikini-clad blonde lady, reclining on white sand with clear water and sailingboats in the background—what looks like a fancy Mediterranean package holiday. This, however, is an advert for one of the three beach resorts under development in the Santa Cruz department of eastern Bolivia, thanks to its low-lying geography and tropical climate. Francisco Cirbián, the general manager of Puerto Esmeralda, one of the other two resorts in development, explained that the project is to be completed by 2016.

These resorts are home to man-made lagoons, the biggest of which will encompass 120,000 square metres, and apartments of varying prices that are available for purchase or to rent for a holiday. Cirbián explains that in the near future there are plans to build a hospital and a school in the vicinity of Puerto Esmeralda. Somewhat ironic, however, is the fact that the company constructing the other two resorts—Playa Turquesa and Mar Adentro—is Chilean, given that the only reason Bolivia has a need to construct an artificial, landlocked beach is due to its loss of the sea to Chile during the War of the Pacific in 1879–83. Yet people are seemingly on board with this project, which has so far been a huge success, despite not being officially open yet.

At the start of 2014, 30 percent of Puerto Esmeralda and an astounding 70 percent of Playa Turquesa had been pre-sold—an essential investment to even begin the construction of such large-scale projects. But in a country with the lowest GDP per capita in South America, in which the average yearly salary is less than $5,000, these pre-sale figures are even more surprising, given that the cheapest lots start at $30,000 and apartments at $60,000. So where are these buyers coming from? It would seem that a small percentage of the Bolivian upper-middle class are managing to sustain such developments. This Dubai-esque utopia seems to be a trend that, after completion in the next year, looks set to take the country by storm. Whether it will continue to grow or not, only time will tell.