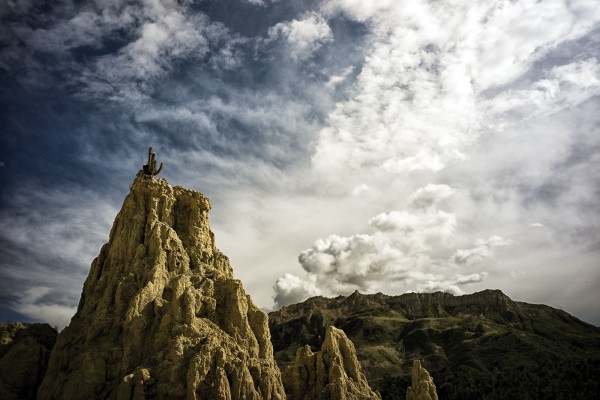 Picture this: it is 1969 and you are American astronaut Neil Armstrong. You have recently gotten back from the moon. Whilst in space you caught a glimpse of the Salar de Uyuni, one of the only natural phenomena visible from outside the earth’s atmosphere, and you decided that you had to visit Bolivia. You have just attended a football match in La Paz between The Strongest and Bolívar. You fancy a game of golf afterwards and come across a bizarre rocky valley close to the golf course. To you, the spires of weathered stone and the numerous gaps, holes and craters remind you of walking on the moon. Naturally, you suggest that this surreal landscape should be named ‘Valley of the Moon’, and its name has remained the Valle de la Luna ever since.
Are you convinced? Perhaps not. It’s one of the most common stories passed on by local guides recounting the tale of how Valle de la Luna got its name. Perhaps there is a shred of truth to the story after all, but if not, upon visiting the valley, it is not hard to see why someone thought the name appropriate. The crumbly earth creates a pockmarked effect on the ground throughout the area and the entire length of the valley is peppered with cosmic craters, eerie chasms and ominous-looking pits.
The twisting spires of the valley have occurred naturally. They are the by-product of thousands of years of powerful erosion caused by strong winds and heavy rains. The mountain that originally stood where the modern-day valley is situated was composed mostly of clay and gradually melted away to reveal the harder rock formations underneath. As the wind and rain continued to sculpt the crumbly sedimentary rock into ever-more interesting shapes, the weirdest and wackiest formations were given specific names by local guides. Walking along the treacherously narrow paths in the valley today, you come across wild shapes christened ‘the viscacha’s jump’, ‘the turtle shell’ and ‘the cholita’s hat’.

However, the potent erosion that sculpted this remarkable landscape acts as a double-edged sword. Having shaped and moulded the dramatic formations of the valley for thousands of years, the same processes of erosion could eventually destroy them. The valley’s high-altitude location subjects it to high-force winds and an annual average of 22 inches of rainfall. Moreover, the combination of heavy rainfall with La Paz’s harmful levels of air pollution presents a serious problem for the soft, sedimentary rock that makes up the valley. Being battered by acidic downpours during the rainy season is causing change at an alarming rate. These environmental factors, intensified by increasing contamination and the effects of climate change, pose a very real threat to the longevity of the site.

In the meantime, the beauty of this peculiar landscape lies in this very same process of constant transformation. The vibrant colours of the valley rock and the surrounding mountains create potent optical illusions. Everything seems both near and far. It is dazzling, as if you had just opened your eyes into direct sunlight, or peeked into a kaleidoscope. The spattering of red, blue, violet, gold and deep brown throughout the rock serves as a chronicle of the area’s fascinating geological history. The diversity of the mineral content in the stone, causing the variation in colour, is a common feature of sedimentary rock, usually located on the seabed.

According to local guides, this sedimentary rock found in the valley indicates that the whole area once formed part of an ancient and enormous inland sea, of which Lake Titicaca, to the north of La Paz, is the only remaining part. Thousands of years of climate change and subterranean geological shifts may have caused the sea itself to recede, but the sediment it left behind has been credited with lending the Valle de la Luna region a surprising biodiversity. Viscacha and various species of small birds and lizards are a common sight lurking in between the stony steeples. In addition to the fauna, the valley is also known to house more than 32 different species of cacti, including an abundance of the well-known local hallucinogenic, the San Pedro cactus.

"The legendary lost city of Atlantis could be buried somewhere in the region."

Lake Titicaca, 50 kilometers away, plays a part in the valley’s mythology. The bottom of the lake, from which the first Incas were supposed to have emerged, is widely viewed as sacred by many local indigenous communities. By extension, the Valle de la Luna, which some believe was originally formed from same lakebed, is also a deeply spiritual location. The majesty of the towering spears of stone and the natural forces that have shaped them have led to the valley being used for numerous indigenous festivals celebrating Pachamama.

There have been numerous colourful myths and legends accorded to the Valle de la Luna, including ones featuring evil spirits that dwell in the dark, rocky crags at the bottom of the valley, tricking people into falling into the abyss and another popular story amongst local enthusiasts that asserts that the legendary lost city of Atlantis could be buried somewhere in the region that made up the ancient inland seabed.

Adding to the mystery of La Paz’s Valle de la Luna is the fact that some experts estimate that at the current rates of erosion, it may disappear altogether in between 100 to 500 years’ time. It is strange to think that this bizarre landscape, a testament to the power of nature that supposedly caught Neil Armstrong’s eye in the ’60s, could, in all too short a time, disappear without a trace. Perhaps a sudden disappearance would consolidate the legend of the place—a valley of ghosts that in time vanished into thin air and dissolved back into the mountains whence it came. Yet, it’s a sad notion that after thousands of years of being chiseled out of the stone by mother nature, the stony spires crawling up into the sky, the Valle de la Luna could eventually be lost forever.