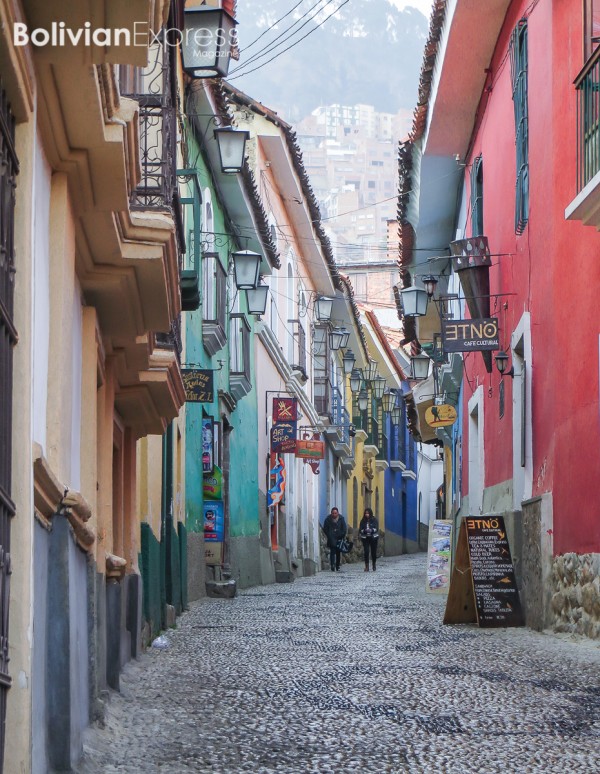 A Passageway Back Into Colonial Times

The buildings are what bring tourists here, and after that they come into our shop.

A hidden alleyway tucked up in the maze of streets that lie above the cathedral on Plaza Murillo, Calle Jaén is lined with myriad museums, stores and cafés. These are mainly aimed at the touristic crowd, but although this street is one of the most visited in La Paz by guidebook followers, it is not that trade that draws many in. Rather, it is the impressive architecture with which the street is filled. In a city full of ramshackle buildings, newly built towers and bare-brick blocks, this small street stands out for the quality of the preservation of its colonial façades.

The day I visited was, like the majority of those in the capital’s dry winter, a bright one. The sun reflected off the gleaming white walls lining the street and made the colours of the vibrant shops glow. The carved wooden railings of the balconies stood proud and straight, and immaculate lanterns hung silently in rows to light the narrow thoroughfare. This is remarkable in a city which is constantly moving forward, that has rejected the majority of the structures of its colonial age.

The top of the street is dedicated to different small museums, from the Museo de Instrumentos Musicales, which in addition to displaying native instruments dating from before the Spanish conquest also offers music classes and various concerts using the display pieces, to the incredibly beautiful Casa de Murillo. This museum offers an in-depth exploration of the history of Pedro Domingo Murillo, a champion of the Bolivian independence movement who is often credited with lighting the spark – el primer grito – which ultimately led to the secession of Latin America from the Spanish crown. Set in a low, cool building around a pretty courtyard, this museum also displays collections of colonial-era furniture and art to fill in the life behind the figure of the hero.

Appreciation for those first rebels against the Spanish authority is clear in this little alleyway. Previously a market street called Cabra Cancha, in the early 19th century it was a hotbed of radical sympathisers, as its position in the old town near the governmental square placed it in the area of the rich, land-owning classes who first incited revolt against the Spanish Empire. Its full current name – Calle Apolinar Jaén – refers back to another of the leading criollos who raised an army in 1809 to try and defeat the rulers. He and Murillo both lived on this street and they were both ultimately hung for their treason, but the renaming of this street shows the gratitude that paceños still feel for their first champion.

Some workers were busy sweeping outside the Casa de Murillo when I visited, and they told me about how the city works to ensure that all the municipal buildings here are kept in their original condition. All of the museums along the street are maintained by the Direccion Patrimonial, a body of workers controlled by La Casa de Cultura. This, ultimately, is controlled by the alcaldia. The team is constantly kept busy, not only inspecting the exteriors of the buildings but also ensuring the upkeep of the courtyards and the interiors of the rooms. One man told me, proudly, that ‘each museum gets a complete renovation every two to three years.’

A worker in a tour-guide shop told me that ‘The buildings are what bring tourists here, and after that they come into our shop.’ However, the preservation of the street is not maintained only because of the money and trade it promotes. The pride of the residents is obvious when they talk about why they like the atmosphere, why they have their studios and workshops there as well as their shops despite it being a busy tourist attraction. It is a street unlike any other in La Paz and it merits the attention it receives, not just for the buildings, but also for its history and for the various institutions that have been established inside its narrow walls.