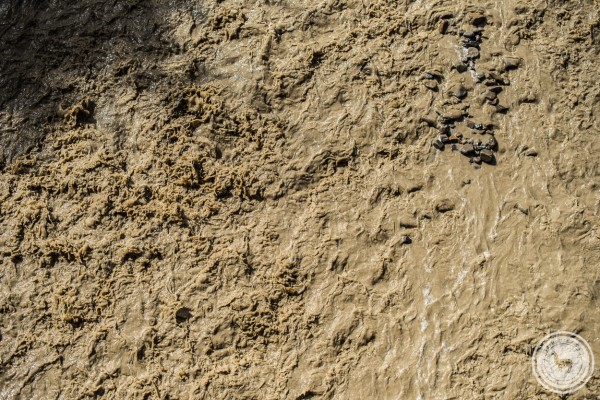 The Río Choqueyapu’s journey from mighty Amazon tributary to the sewers of La Paz.

Toxic foamy water and muddy brown slush are rotting with a variety of discarded rubbish. The pungent aromas emanating from the Río Choqueyapu, which runs directly through La Paz, have been plaguing paceños for as long as memory can attest. South of the city, the foul fumes are even worse.

Wastewater from households, hospitals, and factories flows from the sewer system and into the river untreated. The water is then used to irrigate fruit and vegetable crops, which, in a virtuous but icky cycle of life, are then sold throughout the city. Unfortunately, commercial wastewater contains high levels of heavy metals. Other wastewater, the kind that could be reused effectively, is being wasted and even contaminated. Now, with the recent water crisis in La Paz, it’s urgent that alternative ways to find and care for water are instituted.

The Choqueyapu and other innumerable smaller rivers and tributaries still run under and across the city, but they are not immediately visible; they’ve either been rerouted or buried below ground, only to be seen – and smelled – down south. This is where, particularly when the temperature is warm, the smell of trash and faeces can overwhelm a person.

Choqueyapu in Aymara means ‘river of gold’. On 20 October 1548, the Spanish explorer Alonso de Mendoza chose this site that was shimmering with gold nuggets and founded next to it the city of La Paz. Born at the top of the Chacaltaya mountain, at 4,700 meters, the river crosses La Paz from north to south, supplying some drinkable water in the north of the city, and then meets with other rivers – the Orkojawira, Achumani and Irpavi – to form an open sewer that continues its journey to the Amazon basin.

-What used to be the pride and glory of the city is now a basin of pestilential emanations running through the city.

José Díaz, a researcher at the Instituto de Ingeniería Sanitaria y Ambiental at the Universidad Mayor de San Andrés, says that rivers have an autopurification capacity: naturally occurring radiation and water currents cleanse the water. According to Díaz, in the 1970s the Choqueyapu needed 30 kilometers to clean itself; now it requires 150 kilometers. Additionally, heavy metals from industrial runoff do not evaporate and accumulate in the riverbed.

Díaz blames industry as the major culprit to the pollution. Despite a 2014 law that mandates factories to treat their water, it is hardly enforced. In 2013, the Contraloría General del Estado conducted an environmental audit and published an alarming report revealing the state of contamination. Nonetheless, La Paz still doesn't have a main water-treatment plant. As Díaz explains, ‘There is just no space for a plant in La Paz.’

Today, some of La Paz’s wastewater is treated by small plants spread throughout the city, but only in the most basic and superficial way. Since the 1980s, government proposals have been drafted to build a large plants capable of treating the city’s water. But supporters have encountered resistance and a lack of political will. Municipalities have shown reticence to raising needed taxes. One project, from 1980, conceptualised a plant in the Irpavi neighbourhood, but it was rejected to allow space for the military school and the Megacenter shopping mall. In 1993, the Japanese agency JICA helped plan a facility but work stalled due to a lack of funding. Since then, ten small plants have been built, but the need for a major water-treatment system remains.

This seems like a no-brainer, as the estimated cost of such a project has been calculated to be about US$70 million (the teléferico has cost about US$800 million so far). And indeed, on World Water Day this past March, the national government announced the investment of US$500 million for water-treatment plants across the country.

Díaz remains doubtful as to the immediate reality of the creation of a water-treatment plant. ‘There is an idea to build a plant even further south, in Patacamaya, but it’s a different municipality than La Paz,’ he says, noting it would involve a whole new web of political and administrative complications.

-It’s urgent that alternative ways to find and care for water are instituted.

In the Andean cosmovision, water from the rivers doesn’t have quite the same sacred significance as rain water. Rivers are seen as entities that clean sin and take away the dead. How fitting, then, that the Choqueyapu has been buried away, hidden from sight. But there is a sense of resignation and shame when one mentions the Choqueyapu to paceños, as what used to be the pride and glory of the city is now a basin of pestilential emanations running through the city.