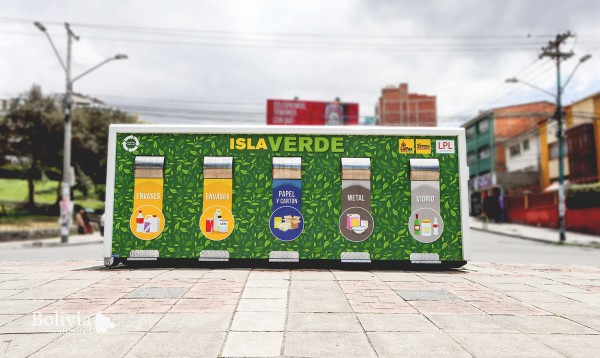 Bolivia Grapples With Its Trash

According to Bolivian newspaper Pagina Siete, there are 5,400 tonnes of waste generated every day in Bolivia; of that only, 4% is recycled. 80% of the waste that every paceño generates in a year could be recycled, yet is not. These are the statistics that the La Paz City Council’s pilot programme for waste separation aims to change.

Implemented on the first of September this year, the initiative marks a big step forward for the city’s environmental efforts, encouraging people to differentiate between basura and residuo which can be reused in some way. For this purpose, four Islas Verdes recycling centres have been installed, two in Miraflores and two in Achumani, whilst 28 blue-and-yellow recycling containers have been placed in each neighbourhood. It is hoped that making recycling easy and accessible in this way will help it become an everyday habit and promote a widespread environmental consciousness and understanding of personal responsibility. Additionally, the resultant sales of recycled goods brings economic benefits via the reincorporation of the goods into the market and the creation of a circular economy. La Paz Recicla is an effort soon to be spread throughout the city with the aim of keeping both the streets and the consciences of paceños clean.

Bottle Caps for Children With Cancer

This programme, raising money for children in Bolivia suffering from cancer, was launched by the Fundación Oncofeliz with the support of the Empacar packaging company and the Asociación de Voluntarios Contra el Cáncer Infantil. It organises the collection of plastic bottle tops, which are then sold with the profits used to buy medical supplies. A kilogramme of bottle caps is worth only Bs2, but over 1,000 kilogrammes a month are already being collected in the early stages of the programme. Many organisations support this programme, the most high-profile being Mi Teleférico, which has collection points in its many stations. Other institutions and schools are also involved, and it is hoped that more will follow suit in the coming months and that the tapitas collection points will become a common sight citywide.

Whilst some recycling initiatives in La Paz are relatively new, some have been around for years. There are shops that both buy recyclable waste and sell the end product. Paper is the most common recycled good. The owners of these shops will buy at a set price, depending on the type of paper, and then later sell it as toilet paper. Other materials can be sold or bought in these shops, including plastic (which is used to make new plastic bottles), clothes, cardboard, batteries and metals such as aluminium, copper and bronze. These shops offer the public a financial motive for going green and are also emblematic of Bolivia’s longstanding no-waste attitude.

Fast fashion is increasingly under fire as people become aware of consumerism’s damaging environmental impact. The most recognisable and increasingly popular alternative to this are second-hand clothing, sustainable clothes made in the country and the phenomenon known as ‘upcycling.’ The latter promotes a more conscious form of fashion, giving new life to both bought and donated second-hand clothing. Through deconstructing, recuperating and transforming these items, upcycling creates new, unique pieces in a way that, unlike the work of most big fashion brands, doesn’t harm the planet. Brands such as ZEF are pioneers in upcycling, working to ensure that fashion and environmentalism need no longer be incompatible.