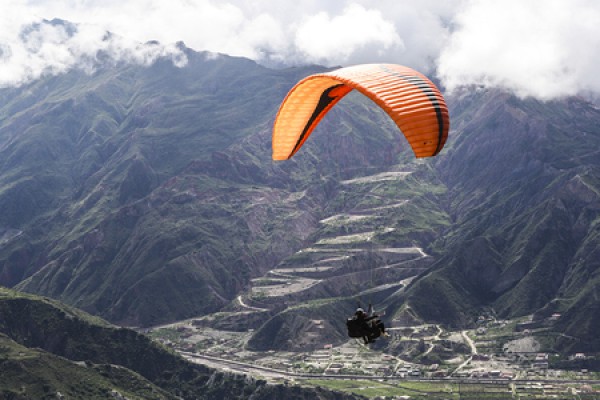 Nature and Going Out

From paragliding to bicycling the Death Road, the city has much to offer the thrill-seeking adventurer

On a recent morning, I found myself at the top of a cliff strapped on to a reassuring tour guide, about to run off the edge. Once we got up in the air, the wind caught the parachute and carried us along indescribable rock formations unlike anything I had ever seen before. I was soaring above the mesmerising and striking Andes, here in the southern part of La Paz, close to the Moon Valley. The experience was all-consuming. It was impossible not to be caught up in the moment.

According to Miguel Alem, one of the partners of the Andes Xtremo tour agency, the most popular months for paragliding in La Paz are between May and September. On average, Andes Xtremo organizes about thirty-five tandem flights a month, but during the high season this number nearly doubles.

Activities such as paragliding the skies, mountain-biking the infamous Death Road, or rappelling down the side of a building attract a growing number of thrill-seeking tourists every year to Bolivia. These adrenaline junkies generate money for the tourism industry. According to the World Travel and Tourism Council, tourism accounted for 6.3 percent of Bolivia’s GDP in 2013—with a projected 4 percent growth rate per annum. At present the industry supports almost 100,000 jobs in the country.

To be honest, I didn’t think of myself as an adrenaline junkie before I came to La Paz. But ever since I arrived in the city, I have grown interested in these adventure sports mainly because they are so readily available. I tried to avoid them, but that was nearly impossible. Three weeks into my trip to Bolivia, I was riding down the Death Road.

According to Derren Patterson, general manager of Gravity Assisted Mountain Biking, ‘Ninety percent of the people who ride the Death Road are tourists.’ The day I went on the road, it was more like 100 percent. The riders came from the United States, Canada, Germany, and the UK.

Why they want to do it varies from seeking an extreme mountain biking experience to being able to say that they have survived Death Road.

Gravity’s bikes are very robust, and the riders were keen to express that they were ‘the best bikes they had ever rode’. Moving along the road, it is clear that some sections are riskier than others. In my group, only one rider bore the brunt of the road, falling at speed and grazing his arm. This was quickly taped up and sterilised by our guide, Marcus, who was at the ready with a toolbox full of medical equipment. However, I think the rider secretly enjoyed the war wounds. He later said that ‘It was genuinely the most amazing thing I’ve done—the journey back up as well, seeing things I missed, just the whole thing.’

Another extreme sport available, the Urban Rush consists of rappelling down a fifty-metre-tall building in central La Paz. The inspiration was in ‘helping people confront their fears and push themselves beyond what they thought was possible’, according to Patterson.

The demand for the Urban Rush experience has increased since its inception. Priced at 150 bolivianos per jump, it remains fairly busy during its five-hour window of daily operation, with approximately twenty people a day taking the plunge. The suggested dress code is a superhero outfit or, if one desires, a bacon costume provided by the company. It must be a thrill to descend a skyscraper in a Spidermanesque way, particularly dressed as a slice of fried meat. As to why one would do it? Just for the kicks! Definitely my next adventure.