La Paz Aims to Be a Super Host 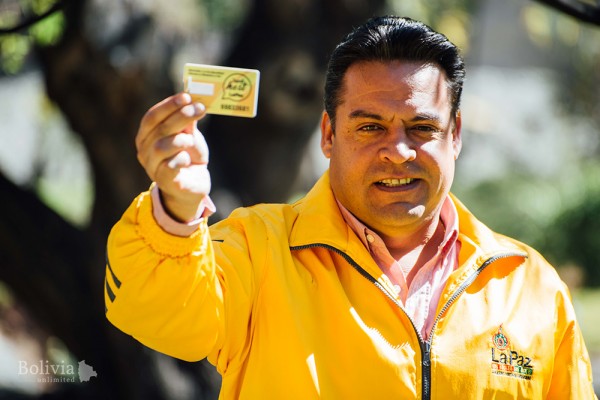 The changing face of tourism in La Paz

In 2014, after a successful Internet campaign, La Paz was included on the New7Wonders Cities list. As a result of this, the municipal agency La Paz Maravillosa was founded, and was tasked with developing tourism in La Paz. They are now launching a new initiative: Super Host. The Super Host programme aims to tackle the issue of providing a safer, more authentic and more accessible experience of La Paz and Bolivia to tourists.

Raúl Pérez, the adviser for La Paz Maravillosa, says that Bolivia has quite a contradictory relationship with tourists. Even as its popularity increases with tourists, there is still a perception of the foreigner as the enemy, the coloniser. ‘In 2014, New7Wonders declared us a “wonder city”. But, paradoxically, in 2015 the World Tourism Organisation carried out a survey, and the least hospitable country to foreigners was Bolivia. So it’s like two sides of the same coin,’ Pérez says. He continues, ‘Why? Because in terms of touristic competitiveness we are always behind. One of the most obvious reasons for this is the problem of hospitality. So we developed the concept of Super Host.’

Patricia Grossman, Director of La Paz Maravillosa explains: ‘We are not from the Caribbean, or Central America – we are Andeans, and Andean people are like this: they are serious, dry, they don’t try to make you smile. And I respect the culture, I don’t want to change it. I want paceños to realise the touristic potential of La Paz. It’s about recognising the city’s potential.’ According to Grossman, the Super Host programme is about intercultural exchange, sharing knowledge and potentially creating business opportunities. To achieve this, the initiative focuses on three axes: safety, access to information and promoting a change.

Improving the image of the city and the country is a daunting challenge, but the benefits of succeeding in this area are worth the effort. Luis Revilla, the mayor of La Paz, highlights the various long-term benefits of such a programme, saying, ‘We are fully aware that the execution of our touristic promotion means an important economic opportunity for the city, but also for the visibility of the city in the world. Of course, it means a lot of challenges, but we think they are achievable in the long term.’ Both Mayor Revilla and Grossman see opportunities for La Paz and Bolivia for positive change and want paceños to see the potential that the city and the country has to offer as a tourist destination.

‘Super Host is an instrument, a mechanism to be able to offer personalised information to whoever visits the city, and offer them a quantity of services which might not even be found on the Web.’
—Mayor Luis Revilla

The Super Host programme aims to train people both from within and outside of the tourism industry. Additionally, the programme will provide a network of information accessible by anyone, combined with a contact centre reachable over the popular WhatsApp smartphone application so that any tourist can request and receive information.

As Mayor Revilla explains: ‘Super Host is an instrument, a mechanism able to offer personalised information to whoever visits the city, and which can offer them services that might not even be found on the Web, allowing specific needs of people to be addressed and provide not just general information that exists in any institution, in any city.’

The contact centre will be available at the end of August, with services provided 24/7 in Spanish, English and French. Users will be able to ask questions and receive personalised information almost immediately. Additionally, a dedicated Super Host office will open, and 31 associated WiFi points will be installed throughout the city later on.

Pérez continues, ‘What can La Paz offer beyond what’s always normally offered? It’s not just the Valle de la Luna, the teleférico, the city centre and so on. We have a gastronomy programme, a programme with [the mass-transit system] PumaKatari, which opens new spaces for you. There’s the discovery of new places like [the popular trekking location] Siete Lagunas.’ There is a clear focus on developing tourism as a means to show a more genuine side to Bolivia and effectively rebrand the country.

As Grossman puts it, to be able to sustain La Paz Maravillosa, the city needs ‘gente maravillosa’ to support the transformation of La Paz into a world tourist destination instead of just a gateway into Bolivia. ‘I want to reach all services in the city and not just the touristic ones. This programme involves us all as hosts,’ Grossman says. ‘We need people to change their logic, to work on the notion that foreigners are not the enemy, the colonisers, and for paceños to recognise their potential.’

Mayor Revilla notes how developing infrastructure and tourism benefit each other in the long term. ‘We’re going to have the best health system in the country, the best transport system – through our municipal buses and the teleférico – the best waste collection system,’ he says. ‘We’re going to have better connections for vehicles, viaducts and bridges that are needed in a city with such a difficult topography, all this converges in the benefits that the implementation of our municipal programmes have for the whole city which also supports touristic development.’ This is no small task, to be sure, but Mayor Revilla realises it, summing up, ‘There’s a lot to be done in La Paz.’ However, with a new hospital recently finished, several additional teleférico lines being built and two more bridges being added, the city is well on its way to achieving its goals.

The Super Host initiative will be launched soon.