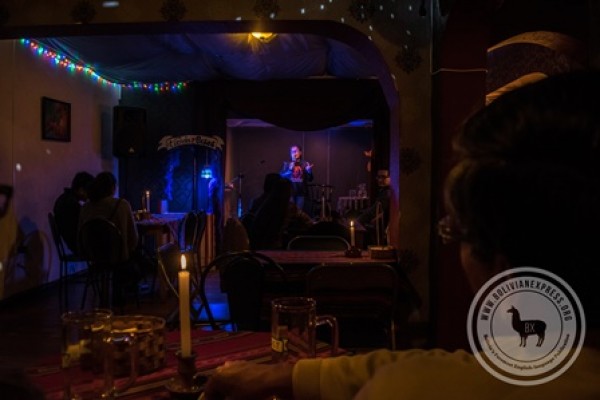 ‘Comedy strengthens us, it stresses us, it helps us, because when we create material we are analysing ourselves,’ Yumi Roca tells me. Yet, as La Maldita Comedia, a four-piece standup group, starring Yumi, Mau Mendoza, Victor Ríos, and newest member Marcos Quevedo, explain to me, their experience has been as much about self-exploration as it has about analysing their environment.

Sitting in Café Blueberries while we wait for the second half of the quartet, I ask both Mau and Yumi about the group’s origins. ‘When we started there was essentially zero standup scene, no culture whatsoever,’ Mau explains. Unlike many of their foreign counterparts, the biggest task facing these four has been not to create material but to familiarise their audience with the idea of it.

The group’s name is a play on words of Dante’s La Divina Comedia, translated, in PG terms, as ‘Damn Comedy’. But when the quartet appear on mainstream television, they must shrug off their name and be referred to as simply ‘a comedy group’. The irony of this is that La Maldita Comedia are, by any measure, the standup comedy group here in Bolivia. Tellingly, this kind of censorship is indicative of the difficulties faced, and overcome, by these comics.

‘The paceño public is reluctant, timid to laugh,’ Yumi laments. ‘So for a joke where they might have to laugh at us, they feel guilty. They have to understand that this is standup: You laugh at yourself, at life, at any situation – particularly in such a chaotic city as La Paz.’

A few days after our brief meeting, I have the chance to see three-quarters of La Maldita Comedia perform, and I discover just how intrinsically specific their material is to their home city.

‘Comedy strengthens us, it stresses us, it helps us – because when we create material, we are analysing ourselves’

Towards the rear of Café MagicK, with candlelit, intimate tables facing the back of the room, the atmosphere is tailor-made for standup. Well, that is until Marcos emerges and realises that his giraffe-like height elides inconveniently with the stage’s overhanging curtain. In a 25-minute show, the audience is treated to a medley of monologues, with styles that are distinct yet united by a brave stand-and-deliver-style narration, striving to shine a new light on quotidian issues of the city.

From microbuses and Morales to cholitas and Chumacero – a star football player for the Bolivian national team – the group explores what it means to be paceño. This is a city of contrasts and contradictions, ‘a real mix’, as Mau puts it. ‘In the day you might work in a bank, and in the evening you might visit a yatiri.’ Exploring these antitheses within paceño identity and lifestyle has provided a bottomless source of content.

‘This is the sort of material that people find difficult to accept, shocking at first,’ Yumi explains. ‘But it is something real. And It is not bad to laugh at reality.’ Their routines are whimsical, well-constructed and – if not in content, then in style – reminiscent of Western standup comedians. Victor Ríos sheds light on this latter aspect: ‘What I try to do, a little, is to take American standup styles and translate that into a local frame of reference.’

It is unsurprising that the group has had to take its inspiration from abroad. Before its formation, three years ago, Bolivia’s standup comedy scene was something of a buccaneering one-man crusade. Javier ‘Javicho’ Soria, 37, has made a name for himself across the border in Argentina, gaining critical acclaim for his routines exploring Bolivian identity through a mocking, self-deprecating voice. While Soria has been looking out, La Maldita Comedia have been looking in.

The group has never performed outside La Paz, let alone Bolivia, and they admit freely that their material needs as much a translation as a tweak if they are to find success across the country. However, with a nationwide tour in the pipeline, more ‘universal’ routines are on the horizon.

Yet the group should not lose their essence. In Mau’s words, ‘We talk about themes that are not often talked about in comedy, themes specific to La Paz, heavy themes like religion, sex, abortion, politicians.’ Now, these are very clearly not themes exclusive to La Paz, however when you give them a paceño context, whether that be their censorship, their illegality, or their corruption, they take on a new importance. By addressing a subject as sensitive as abortion, as Yumi does in her routine, with a comedic frame, you are normalising a discussion around it. And only through discussion can society evolve. ‘The advantage that a comedian has is this white flag that allows them to talk about whatever topic,’ Yumi tells me. ‘Not with a lack of respect, but with a sense of humour.’

Learning to laugh at yourself and your environment is a rehabilitative and restorative process. La Maldita Comedia, by creating both comedy about and a standup culture within La Paz, might just have more influence on their city’s future identity than they realise.